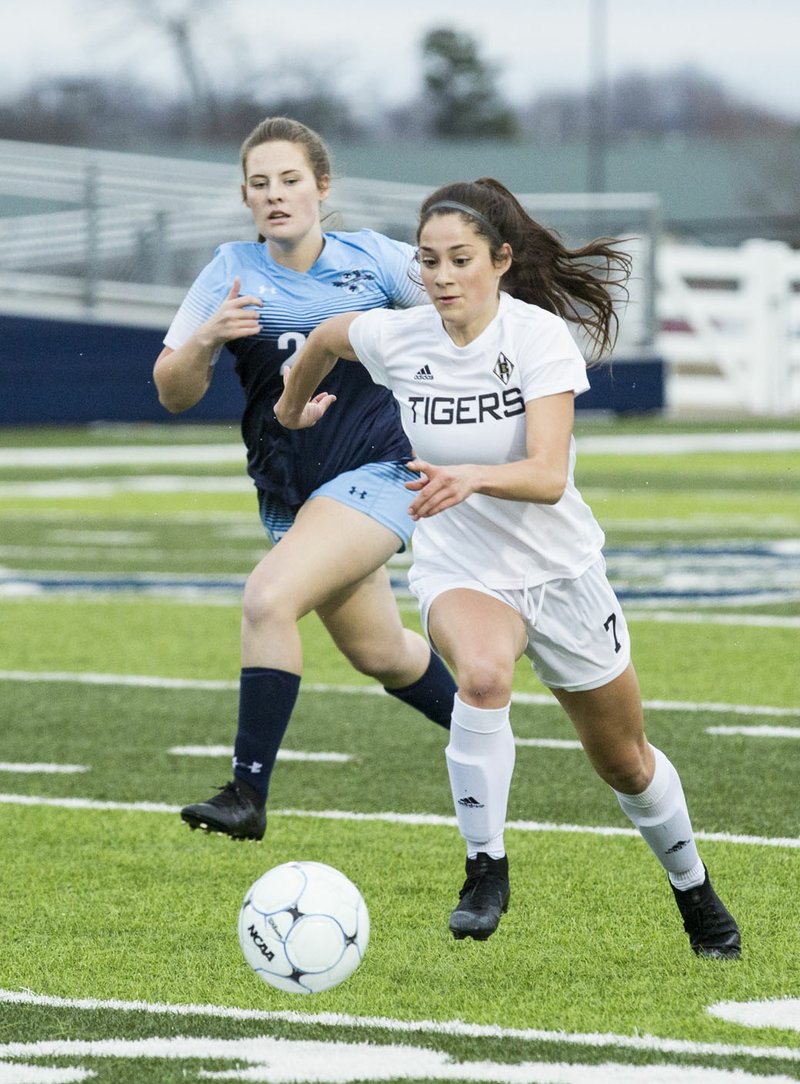 SPRINGDALE -- With Bentonville High well in control of the match after Tyler Ann Reash scored the team's fifth goal, Tigers coach Kris Henry could rest easy knowing her team was headed to a win in the 6A-West Conference opener.

Bentonville scored four goals in the span of 13 minutes to beat Har-Ber, 5-0, on the opening night of league play Tuesday at Wildcat Stadium. The Tigers extended their winning streak to four with the victory.

"You always got to get that first win," Henry said. "Of course, there are nerves. It doesn't matter how many times they've been in this game, the first one is big."

The Tigers had 17 shots on goal against the Wildcats' five, but Bentonville struggled to get anything started on offense for most of the first half. The team had a few opportunities early to score, but Har-Ber was able to keep their forwards contained for a while.

Henry said she was pleased with her team's patience during the stretch, she said.

Angelina Diaz, Bentonville's leading scorer on the season, broke the scoring drought 29 minutes into the first half when she booted a shot from about 20 yards out into the right corner of goal, just over the outstretched hands of Har-Ber keeper Estera Kanono.

Two minutes later, Lauren Parker scored the team's second goal of the night off a pass up the left field side from Megan Sattler. Parker showed nice touch on the shot, tapping the ball in pass Kanono who came to meet her in the box.

Diaz finished off the scoring flurry in the first half with her second goal of the night after she drilled a shot from the left side of the field that tipped off Kanono's hands into the goal.

The junior also recorded an assist after she found Tyler Ann Reash for the team's fourth goal just two minutes into the second half. Reash scored again with 14 minutes left in the match for her fifth goal of the season.

"They're just dynamic," Henry said of Diaz and Reash. "They're dynamic, and they're goal oriented. They're just going to do whatever it takes."

Kanono had a busy night as the junior remained under constant pressure from Bentonville's forwards. Despite giving up four goals, she notched 11 saves in the loss.

The five goals Har-Ber gave up equaled the total its allowed through the team's first eight matches. The Wildcats struggled to clear its side of the field and failed to maintain close contact on many of their first touches on the ball.

The loss marked Har-Ber's third straight match without scoring a goal, which is a problem coach Fabrizio Campagnola has been trying to address with his young team, he said.

"We need to pass the ball quicker, better and with a little more accuracy," Campagnola said. "That's all it is. Bentonville is good at what they do because as soon as they win the ball, they're not going to waste any time. They're going to look and make a very good pass up, either for a wing or for a forward. It's never horizontal. It's always diagonal or vertical. That's what we need to do."

The Wildcats had a couple of chances to score in the first half but had one goal called back for being offsides and another no-call on a play that Campagnola thought should have been a penalty kick for his team. Har-Ber's Joselin Villasenor had the ball in the box when Bentonville keeper Bre East ran into her.

"There was a PK. That's a PK every day, everywhere. The goalkeeper doesn't touch the ball and takes the girl down. It's a PK," Campagnola said. "The ref said, 'Oh I'm sorry, I was running.'"

The Lady War Eagles outlasted the Lady Red Bulldogs in a shootout, after a scoreless battle in regulation to open 6A-West Conference play.

Three different Lady Mounties had two goals each as Rogers routed the Lady Pointers with a big second half.

Rogers (6-1, 1-0 6A-West) led only 3-0 at halftime, but poured it on the second half. Leslie Barrales, Jourdan Badely and Grace Carroll had two goals each for Rogers, while Kristen Babbitt contributed four assists.

Bryce Mills, Lucas Apparecido and Elliott Nimrod each scored a goal as Bentonville opened 6A-West play with a road win over Har-Ber.

Mills scored his goal to give the Tigers (4-1, 1-0) a 1-0 halftime cushion, then Apparecido and Nimrod completed the scoring. Thomas Ayala scored the lone goal for Har-Ber.

Brayden Douthit scored the winning penalty kick, and Lleyton Hull had the save on goal as West slipped past Fayetteville at Harmon Stadium.

Collin Higgins had the Wolverines' only goal in regulation, with Sebastian Bedford recording the assist. Blake McDoulett, Austen Duncan, Austin Pettigrew, Ethan Stockdale and Tom Shultz were successful in their penalty kicks before Douthit scored his game-winner.