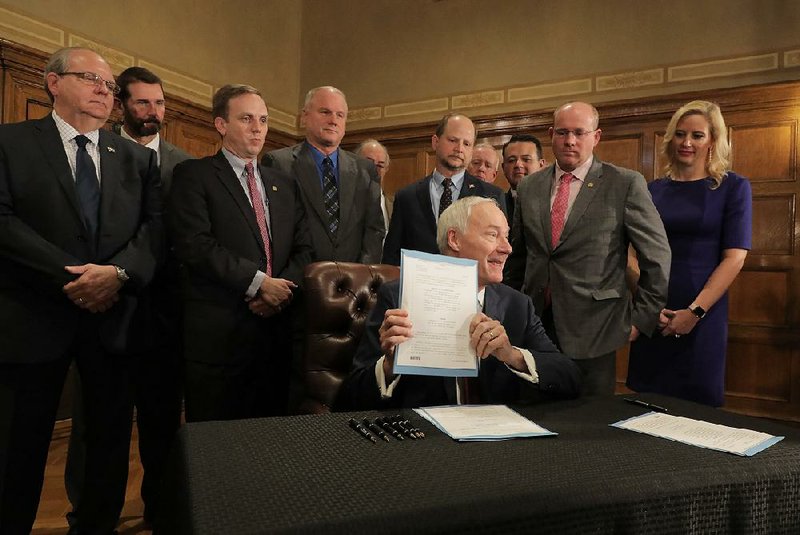 Gov. Asa Hutchinson holds a news conference Tuesday to sign legislation that raises fuel taxes and fees and reallocates other resources to increase highway funding. The other half of the funding plan, a sales-tax extension, will be referred to voters in the 2020 general election.

Gov. Asa Hutchinson on Tuesday signed into law a bill to impose a wholesale sales tax on gas and diesel fuel, raise electric and hybrid vehicle fees, and reallocate some state casino revenue to raise about $95 million a year more for the state Department of Transportation for highways.

The law indexes future tax increases so that the maximum future increase would be 0.1 cents per gallon per year, meaning a maximum of 1 cent every 10 years.

State officials also project the tax to raise about $13 million more a year each for cities and counties.

The tax increase on gasoline and diesel is the first one approved by state lawmakers since 1999, according to state officials.

At a news conference marking the bill signing, Hutchinson was asked whether Republican lawmakers who supported his highway funding plan can expect primary-election challengers because they voted for the new taxes included in Senate Bill 336 by Sen. Terry Rice, R-Waldron.

The Republican governor said he expects the lawmakers' decisions will be "well-supported among the public."

"I think it shows that, so it is too early to talk politics for next year," he said.

State Democratic Party Chairman Michael John Gray said afterward, however, that "I think the bigger issue we'll see over the gas taxes will be in Republican primaries."

The House and Senate last week also voted to refer a proposed constitutional amendment to voters in the 2020 general election that would make permanent the half-percent sales tax for highways that voters approved in 2012 for a 10-year period.

If approved by voters, the proposal is projected by state officials to raise about $205 million more a year for highways and $44 million more a year each for cities and counties. The measure is House Joint Resolution 1018 by Rep. Jeff Wardlaw, R-Hermitage, and doesn't require the governor's signature.

"With the signing of this bill and hopefully with the trust and confidence and vote of the people [on extending the half-percent tax] that we will put to bed the highway funding issue for the foreseeable future," House Speaker Matthew Shepherd, R-El Dorado, said during Hutchinson's news conference.

Since 2013, 27 states and the District of Columbia have enacted legislation to increase fuel taxes, according to the National Conference of State Legislatures.

In 2018, Missouri and Oklahoma enacted legislation to increase motor-fuel taxes, the conference reported. But Missouri's increase was subject to voter approval because of constitutional limitations on revenue increases, and Proposition D failed at the ballot box.

At his news conference, Hutchinson said that "there has not been better partners that anyone could ask for in passing these bills than these two gentlemen up here," with Shepherd and Senate President Pro Tempore Jim Hendren, R-Sulphur Springs, at his side.

"This was an enormous lift. It was hard. It was difficult in negotiation. They got it done. They got it passed," he said.

The highway funding bills received incredible support in the Legislature because the need is evident, the governor said.

His plan to eventually raise $300 million more a year for highways is the largest one in the state's history, he said. He mentioned the $40 million rural road program in 1985, the $50 million highway improvement plan in 1991, the $60 million interstate rehabilitation program in 1999, and the $175 million Connecting Arkansas Program in 2012.

The plan was passed "with the broadest bipartisan support that can be imagined in funding a highway program," Hutchinson said.

Hendren, the governor's nephew, said that "to get 27 votes for a bill that includes ... additional fees and taxes in a Republican Legislature is an incredible lift.

"I am not sure that anyone else could have done it as well as Sen. Rice did and the same with Sen. [Lance] Eads, [R-Springdale] on his work on the constitutional amendment," said Hendren.

"I was telling somebody that I have been in the Legislature a long time. I don't think I have ever voted for a tax increase, but somehow I am sponsoring this one. But it just goes to show I think all of us have come to realize how important roads are," Hendren said

"We have got a new interstate opened in the Bella Vista bypass, 540, and I get more feedback about how much people enjoy the investment in roads and infrastructure than almost any other thing," said Hendren, who served in the House from 1995-2001 and has served in the Senate since 2013.

Shepherd said he thinks the bills "are really a model of how the legislative process should work."

"I know that in my conversations with the governor and Sen. Hendren, there was a lot of back and forth on these issues, and ultimately we found common ground," he said.

Asked about his role in promoting the proposed constitutional amendment on the ballot in 2020, Hutchinson said that "I intend to do what is necessary to make sure the voters are aware of that, educated about it, and I'll work to see that in the campaign as needed."

Hutchinson said he also signed two "reform bills" on Tuesday because "I believe they were integral in making sure that there was broad support for this effort."

One of those bills was Senate Bill 385 by Sen. Jonathan Dismang, R-Searcy, which requires the Legislative Council or its executive subcommittee to hire one or more consultants to assist in a study of the state Department of Transportation.

The measure also requires the Legislative Council to file with the governor and House and Senate leader a final report, including recommended legislation by Dec. 1, 2020, and the state's Internal Audit Section to conduct an annual project review and efficiency study of the department.

The other bill, Senate Bill 386 by Dismang, requires the Transportation Department director to present to the Highway Commission all draft legislation by Dec. 1 prior to a regular legislative session for its approval, and require the director to report to the Legislative Council about that legislation at its December meeting.

In a 2016 special session, lawmakers enacted Hutchinson's short-term highway funding plan to raise about $50 million more a year in state funds for highways primarily from surplus general revenue and $20 million a year from state treasury interest earnings. The money is needed to match $200 million a year in federal highway funds.

Last month, Hutchinson signed into law legislation to cut the state's top individual income tax rate from 6.9 percent to 5.9 percent over two years, which state officials projected will reduce state tax revenue by $97 million a year after it's fully implemented.

In 2015 and 2017, the Legislature enacted Hutchinson's plans to cut individual income taxes for people with up to $75,000 in taxable income. They are projected to collectively reduce state tax revenue by about $150 million a year.

The three tax cuts combined are expected to cut revenue by $247 million.