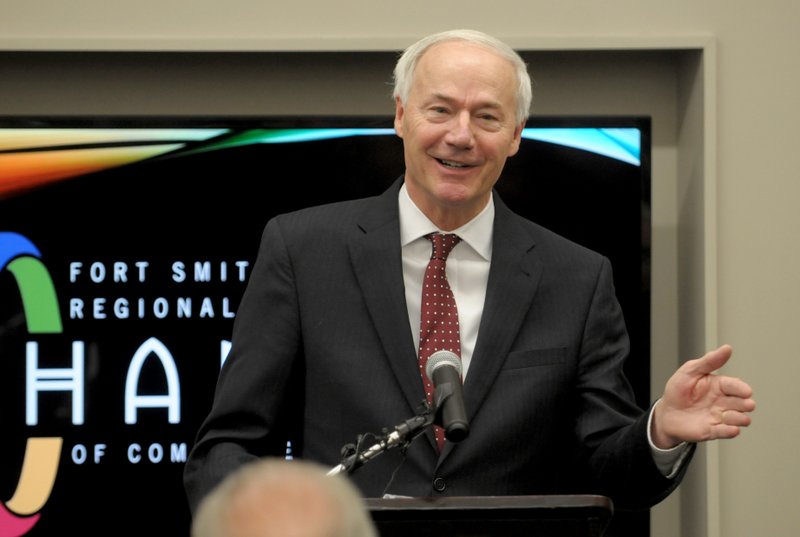 FILE — In this file photo, Governor Asa Hutchinson speaks Wednesday, January 2, 2019 before his announcement of Keith Gibson as the incoming Arkansas Highway Commissioner at the Fort Smith Regional Chamber of Commerce in Fort Smith.

Gov. Asa Hutchinson on Wednesday acknowledged the will of the people and declared that he opposed bills seeking to exempt teenagers, small businesses and nonprofit groups from the voter-approved initiated act to raise the state's minimum wage.

The Republican governor's remarks at a luncheon of the Political Animals Club in Little Rock came after the House Public Health, Welfare and Labor Committee on Tuesday night advanced the two bills that would reduce the minimum wage law's impact.

House Bill 1752 by Rep. Robin Lundstrum, R-Elm Springs, would exempt businesses with fewer than 25 employees from the wage law starting next year. Nonprofit "developmental service providers" and nonprofit organizations with annual budgets of less than $1 million also would be exempt under the bill.

Lundstrum said Tuesday that the voter-approved measure would pose a challenge for small businesses next year when the minimum wage is scheduled to start rising.

At Wednesday's luncheon, Hutchinson was asked about Lundstrum's legislation.

"Now I ... see Kenny over here for the chamber that has worked on this," he said, referring to Ken Hall, executive vice president of the Arkansas State Chamber of Commerce, which opposed the initiated act.

"I am very sympathetic to those needs and that's really one of the reasons that I did not support the initiative to raise that minimum wage because of what this means to teenage employment, what does this mean to small business and nonprofits," Hutchinson said.

"But having said the concern about it, this is an act of the will of the people of Arkansas, and I do not believe it should be changed by a legislative act," he said, drawing scattered applause from the audience.

"I think that's an important message," he said.

Also, the Republican Party of Arkansas released a statement Wednesday saying the minimum wage initiated act -- and other citizen-approved measures -- should be amended only when "circumstances so demand."

"Until then, we should follow the direction of the people and not attempt to alter it," the statement said.

Lundstrum said Wednesday that she plans to move forward with the legislation despite opposition from the governor and her party. She also said she plans to amend the bill to clarify that no businesses may pay any workers less than $9.25 an hour -- the current state minimum wage.

"I realize the people voted," she said. "But we vote for things ... and sometimes there are unintended consequences that need to be addressed. I am confident the people of Arkansas didn't vote to hurt their nonprofits."

She also said the minimum wage increase will hurt small businesses and teens looking for their first jobs.

"It's like belly buttons; everybody's got an opinion," Lundstrum said. "We're here to represent the people of Arkansas. I'm listening to my nonprofits and my small businesses. It's important for teens to have jobs. ... This is too important to not step up and say something right now."

The bills will require two-thirds of the approval of the 100-member House and 35-member Senate. Lundstrum said she'd accept the vote outcome of her fellow members.

At the same time the governor was addressing the Political Animals Club, House Democrats held a news conference at the Democratic Party of Arkansas headquarters where they criticized the 6 p.m. Tuesday committee vote to advance Lundstrum's proposals. They said it was held under "the literal cover of darkness."

David Couch, the Little Rock attorney who ran the ballot campaign to raise the minimum wage, weighed in on Twitter later Wednesday, saying "no one knew" ahead of time that Lundstrum's bills were going to be considered.

"It was infuriating when [the] chairman said, 'Well, I see no one has signed up to speak against the bills,'" Couch wrote.

"To his credit, and I've said it when he does it, the governor has broken with the ideological points of view sometimes to say 'No,'" Gray said.

Asked if the Democratic caucus was unified in its opposition to Lundstrum's bills -- which would in turn allow the bills to be defeated with only a fraction of Republicans voting "no" -- Blake said some Democrats may end up supporting the bills.

"We are the big-tent party," Blake said. "We will try to convince [other members], but there is no mandate."

Employers can obtain waivers from the state Department of Labor under which full-time students can be paid 85 percent of the minimum wage, Hutchinson told the Political Animals.

"I have asked them to lean forward to make sure these are available and can give [the waivers] for qualified employers," Hutchinson said. "So there is a risk there, but I think the public has spoken on it, and I think we need to abide by that."

Denise Oxley, general counsel for the state Department of Labor, said in an email to this newspaper that the current minimum wage law provides that a full-time student attending any accredited institution of education in this state and who is employed to work 20 hours or less when school is in session or 40 hours or less when school is not in session can be paid 85 percent of the state minimum wage rate.

"The agency's administrative rules require an employer to apply for a waiver, in part, so we can ensure the employer is aware of the hours restriction," she wrote. "Additionally, students performing services for the school college, or university in which he or she is enrolled and regularly attending classes are exempt from the law."

Nine employers and 58 students participate in the program, Oxley said.

Asked afterward if he would veto the bills if they reach his desk, or if he is hoping they will be defeated in the House, Hutchinson said that's "premature."

But he added: "I cannot support those bills. I cannot support the bills that alter significantly the minimum wage that was passed." He added, "we have expressed it to some of the key people as well as the chamber of commerce."

Information from this article was contributed by Andy Davis of the Arkansas Democrat-Gazette. 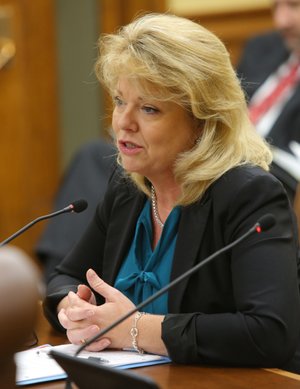 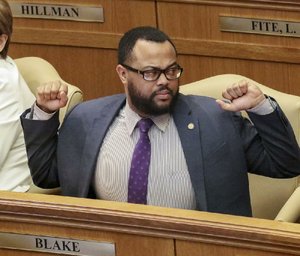 Photo by John Sykes Jr.
House Minority Leader Charles Blake of Little Rock limbers up during a break in the action Tuesday afternoon in the House chamber.