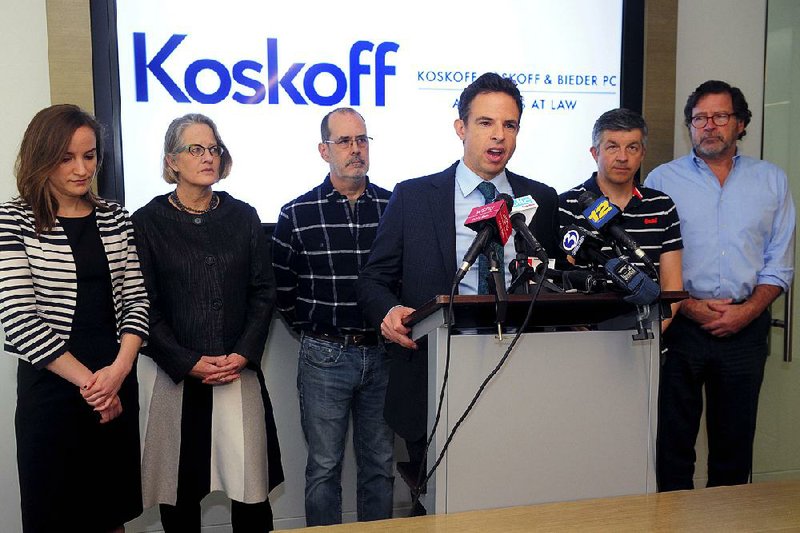 HARTFORD, Conn. -- Gun-maker Remington can be sued over how it marketed the rifle used to kill 20 children and six educators at Sandy Hook Elementary School in 2012, a divided Connecticut Supreme Court ruled Thursday.

Gun-control advocates touted the ruling as providing a possible road map for victims of other mass shootings to circumvent a long-criticized federal law that shields gun manufacturers from liability in most cases when their products are used in crimes. Gun-rights supporters bashed the decision as judicial activism and overreach.

In a 4-3 decision, justices reinstated a wrongful-death lawsuit against Remington and overturned the ruling of a lower court judge, who said the entire lawsuit was prohibited by the 2005 federal law. The majority said that while most of the lawsuit's claims were barred by the federal law, Remington could still be sued for alleged wrongful marketing under Connecticut law.

"The regulation of advertising that threatens the public's health, safety, and morals has long been considered a core exercise of the states' police powers," Justice Richard Palmer wrote for the majority, adding he didn't believe Congress envisioned complete immunity for gun-makers.

Several lawsuits over mass shootings in other states have been rejected because of the federal law.

The plaintiffs in Connecticut include a survivor and relatives of nine people killed in the shooting. They argue the Bushmaster AR-15-style rifle used by Newtown shooter Adam Lanza is too dangerous for the public and Remington glorified the weapon in marketing it to young people, including those with mental illness.

Remington, based in Madison, N.C., has denied wrongdoing and previously insisted it can't be sued because of the 2005 law, called the Protection of Lawful Commerce in Arms Act. A Remington spokesman said Thursday that the company had no comment on the court ruling.

"We have no timeline for any comments to be made on the subject," spokesman Eric Suarez wrote in an email.

James Vogts, a lawyer for Remington, has cited the 2005 federal law and previously said the Bushmaster rifle is a legal firearm used by millions of people for hunting, self-defense and target shooting.

Lanza, 20, shot his way into the locked school in Newtown on Dec. 14, 2012, and killed 20 first-graders and six educators with a Bushmaster XM15-E2S rifle, similar to an AR-15. He fatally shot his mother, who had legally obtained the weapon used, in their Newtown home beforehand, and killed himself as police arrived at the school.

Nicole Hockley, whose 6-year-old son Dylan died in the shooting, said Thursday that a main goal of the lawsuit is to stop Remington and other gun-makers from gearing their advertising toward troubled young men.

"We have always said our case is about reckless sales and marketing to disturbed youth," Hockley said. "We wanted our day in court. This is a step forward to ensure that manufacturers like Remington are not allowed to keep targeting people who are at risk."

A gun industry group, the National Shooting Sports Foundation, which happens to be based in Newtown, said the state Supreme Court ruling was an "overly broad interpretation" of an exception to the 2005 federal law.

"The majority's decision today is at odds with all other state and federal appellate courts that have interpreted the scope of the exception," the group said in a statement, adding it "respectfully disagrees with and is disappointed by the court's majority decision."

Connecticut Chief Justice Richard Robinson focused much of the dissenting opinion on the intent of Congress to limit gun-makers' liability.

"Because the distastefulness of a federal law does not diminish its preemptive effect, I would affirm the judgment of the trial court striking the plaintiff's complaint in its entirety," Robinson wrote.

U.S. Sen. Richard Blumenthal, a Connecticut Democrat, called the ruling a victory for gun violence victims that gives momentum to an effort by him and other federal legislators to repeal the 2005 law.

"It's a wow moment in American legal history," he said. "It will change the legal landscape for this industry, potentially all across the country."

Information for this article was contributed by Lisa Marie Pane of The Associated Press.