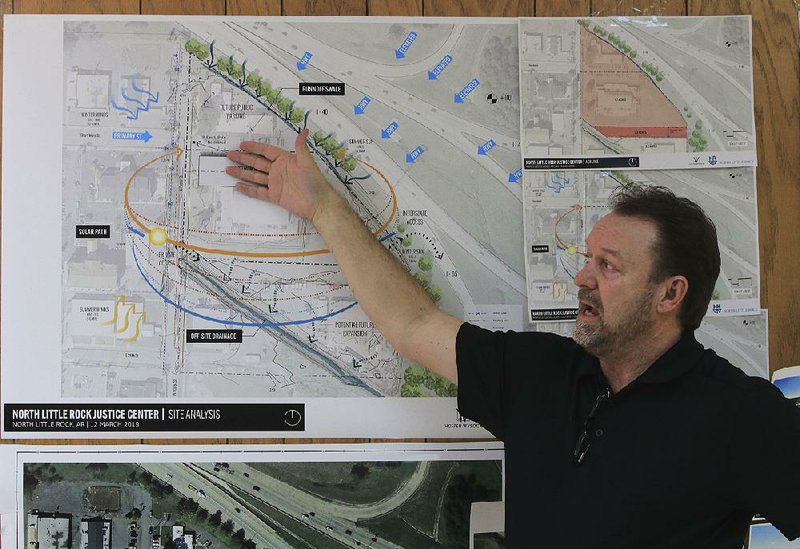 Architect Ken Henton with Hoefer Wysocki in Leawood, Kan., talks about the site for the new North Little Rock police and courts building during a meeting Thursday with city officials.

Design team members planning North Little Rock's $30 million police and courts building are spending four days working with police administrators and judges to determine what will best meet their wants and needs for a headquarters that's intended to last the next half-century.

Employees of Hoefer Wysocki, an architectural, planning and interior design company from Leawood, Kan., a Kansas City suburb, spent day and evening hours hearing ideas. They then refined them and progressed with what the tentatively named North Little Rock Justice Building could look like and feature.

A few city, police and courts administration members, along with print media representatives, were invited Thursday to preview the architects' early work in a conference room at the Police and Fire Training Building. Preliminary drawings, photos of several North Little Rock buildings and other more-modern police buildings covered much of the walls.

An interactive three-dimensional presentation showed the changing conceptual designs, something North Little Rock Police Chief Mike Davis said was a first for him to see, after three days of talks. The design team will leave this afternoon.

"The video was done last night, just based on our conversations," Davis said of the inclusive process during what he called a "four-day charette" between his department and the design team, and the long hours the team had put in while in the city.

Ken Henton, a Hoefer Wysocki partner, said the design team members drew from their conversations with police and courts personnel to come up with evolving ideas, "rearranging rooms like puzzle pieces" to see what would work best.

"They've been here three or four times already," Davis said. "They've met with every division within the department."

The Justice Building will be in the 2600-2700 blocks of Poplar Street, where the Arkansas National Guard's Fisher Armory and the North Little Rock School District administration building are now. The city agreed with all parties last year on a land exchange, plus a $500,000 payment by the city to acquire the properties.

The armory will be razed within the next month, Davis said Thursday. Construction could break ground in November and, optimistically, he said, be completed in November 2020.

Replacing the city's police and courts building was a big part of a sales tax package the city put to voters in 2017. The current building at 200 Pershing Blvd. dates to 1961 when the Police Department had about 100 fewer officers than it does today. Today's Police Department is spread over five campuses and four substations throughout the city. The courts annex was added in 1964.

"It will actually be more effective for us, from the standpoint of being able to do what we do," North Little Rock District Judge Randy Morley said Thursday of court operations. Current cramped conditions make it "virtually impossible to provide adequate security, even with the police there. That's really our main concern."

North Little Rock voters approved a 1 percent city sales tax in August 2017 that included a five-year, one-half percent tax to build a new police and courts building, improve fire stations, and correct street and drainage problems citywide. That portion of the tax was projected to raise $20 million for the new police and courts home.

The planned two-story building will likely be in a "U" or "L" shape because of the site's dimensions, Henton said. The building will have about 80,000 total square feet with "a lot more green space on the site when we're done than there is now." There will be secured parking for employees and screening from the Interstate 30-Interstate40 interchange to provide privacy and security.

A feature Davis said he is looking forward to having is a "community room," tentatively to be on an outside portion of the police building that would be a training room for police and fire during the day, but open for community meetings for the public in the evenings. The room would be secured from other parts of the police headquarters and court offices. A weapons screening room is also included next to the community room, according to preliminary drawings.

"My big thing is having a community room," Davis said. "That room will be bigger than our largest training classroom now.

"We're told to be thinking 50 years down the line," Davis said of the building's design. "That's the important piece. We have to think that way. The building is being designed to where if we need more room later, that capability will be there. It's a big deal. What were the odds for getting something like this?"