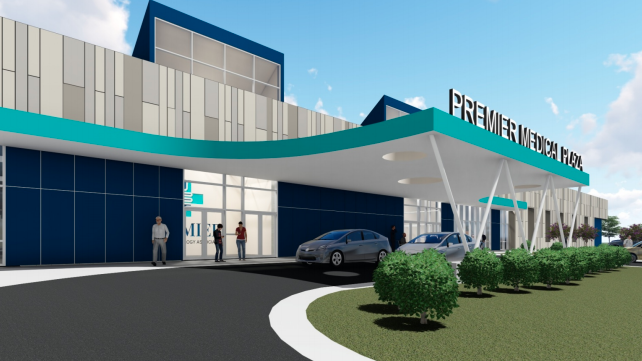 This rendering released by Moses Tucker Partners shows the plan for Premier Medical Plaza at the former location of a Kmart in Little Rock.

Redevelopment of the former Kmart shopping center at 10901 N. Rodney Parham Road in Little Rock into a medical complex has grown into a $38 million project.

The physician-owned practice purchased the property for $12 million last fall.

Chris Moses, president and chief executive officer of Newmark Moses Tucker, said then another $23 million would be spent with work to begin immediately, to be completed by summer.

Clark Contractors Inc. obtained a building permit last month valued at $15 million. No work was done because, according to Jimmy Moses, the development firm's chairman, closing on the loan took longer than expected.

Work is now set to begin Monday with completion by year's end, Chris Moses said in a release.

The average vacancy rate for Class A office space in Northwest Arkansas stands at 9.6 percent for the second half of 2018, according to a report from the local offices of commercial real estate services and investment firm CBRE.

Bentonville had the largest vacancy rate of Class A office at 17.38 percent, with 107,532 square feet available. According to the report, if two buildings with historically high vacancy rates are removed, the vacancy rate would stand at 8.1 percent. The report said Walmart's plan for a new office campus and concern about traffic are pushing up vacancy rates.

The Arkansas Index, a price-weighted index that tracks the largest public companies based in the state, fell 0.97 to 412.69 Thursday.

"Equities shrugged off the announcement of a delay to a proposed trade summit between the United States and China from March to April and closed relatively flat on quiet volume following strong gains posted earlier this week," said Leon Lants, managing director at Stephens Inc. in Little Rock.