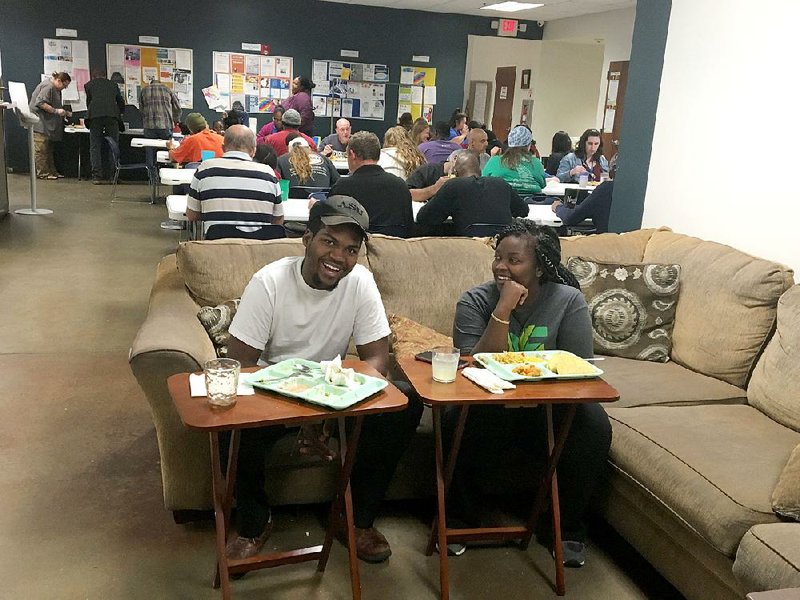 Residents of the nonprofit Our House partake in a meal provided by Our Lady of the Holy Souls Catholic Church in Little Rock. The partnership between Our House and Holy Souls is one of many observed by researchers for the Little Rock Congregations Study, led by Dr. Rebecca Glazier of the University of Arkansas at Little Rock’s School of Public Affairs.

Do you have a church home?

"That is a question that maybe [people] from Arkansas will be familiar with," Glazier said. "But coming from California, no one had ever even asked me if I went to church, much less use this really beautiful phrase of a 'church home.'"

The phrase stuck with Glazier -- who had come to the university in 2009 from California with a doctorate in political science to teach and further her research on foreign policy, conflict and religion -- as she began a research project in 2012 called the Little Rock Congregations Study.

Research for the study centered on three goals: learning how faith-based engagement affects communities; taking that information full circle to benefit Little Rock; and simultaneously giving her students a chance to learn and research outside of the classroom.

It's those latest findings that Glazier -- who is now an assistant professor at the University of Arkansas at Little Rock's School of Public Affairs -- shared with a group of around 50 people during a lecture she gave last week in Little Rock. 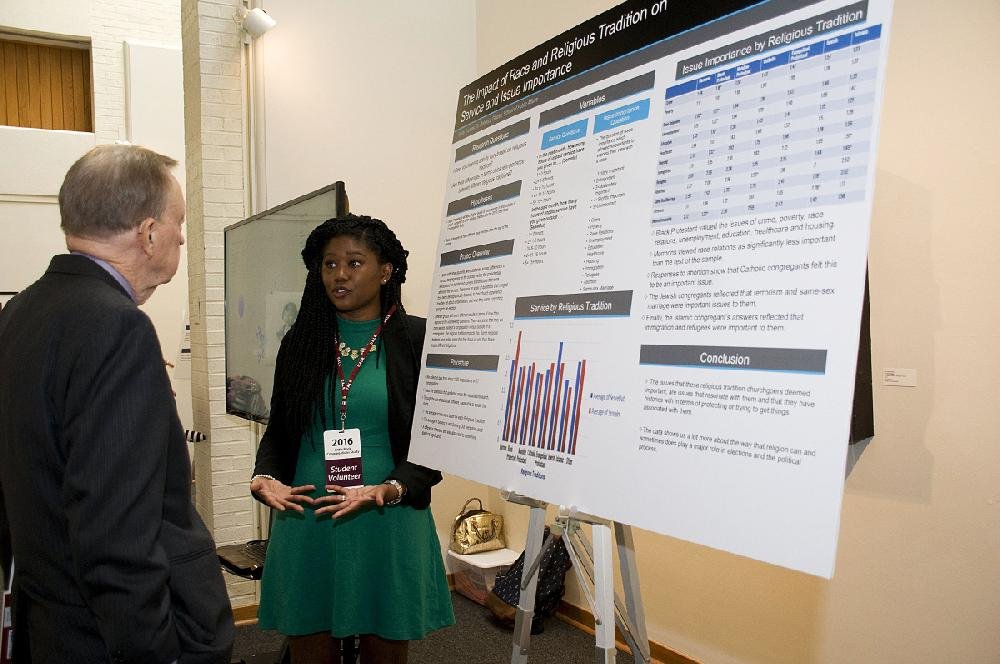 Faith Thomas, a student researcher for the 2016 Little Rock Congregations Study, presents some of her original findings. Led by Dr. Rebecca Glazier of the University of Arkansas at Little Rock’s School of Public Affairs, the study aims to learn more about faith-based community involvement.

The Little Rock Congregations Study compiled information from surveys completed by 111 Little Rock congregation leaders. Student researchers in Glazier's undergraduate class on survey research methods took on various roles in the project, including assistance with writing and distributing surveys, making initial contacts with Little Rock clergy and engaging with faith communities. They also wrote stories detailing congregations' involvement with the community through work and partnership with area nonprofits, which are posted on the study's website, research.ualr.edu/lrcs.

When congregations provide services that benefit the community, it also benefits the church members involved and strengthens congregations, according to the survey's findings.

Research found that an average of 3.8 services are provided by individual congregations, said Glazier, amounting to 1,300 services among the more than 110 congregations. About 69 percent of congregations reported providing marriage and relationship counseling. Forty-seven percent surveyed reported hosting food banks, and 41 percent offered rent and utility assistance.

An example of the study's ability to further benefit the community is highlighted through the study's website, which features a map of food pantries hosted by congregations or nonprofits and discovered through the research, categorized by whether each works independently or as a partnership. Glazier's students also worked to provide information on each food bank on a separate interactive map. A cluster of six churches in an area around Mississippi Street, Glazier noted, work together on the food pantry hosted at Saint Mark's Episcopal Church, which she said served more than 10,000 people last year. 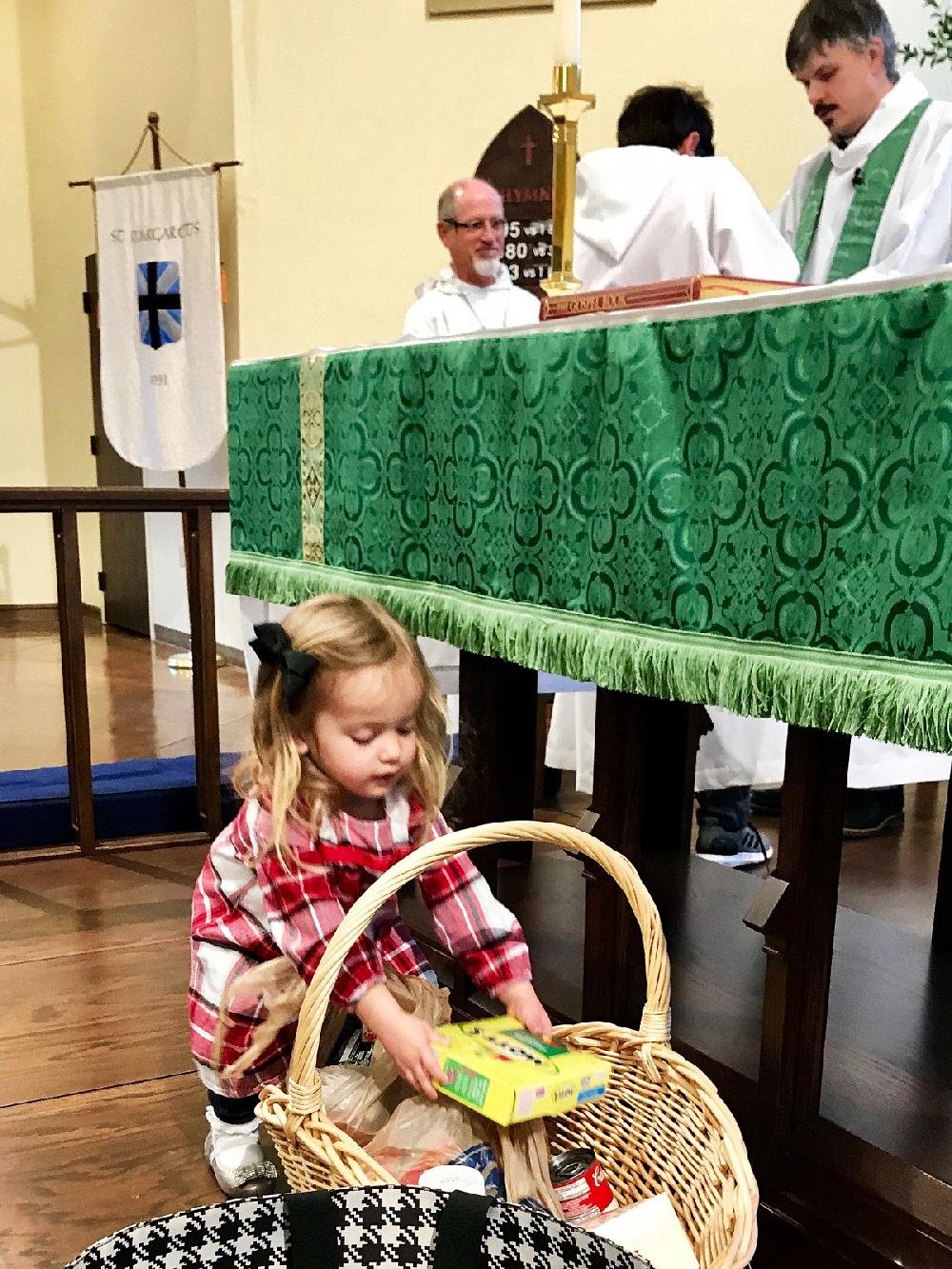 A young parishioner at St. Margaret’s Episcopal Church in Little Rock makes a food contribution to the church's offering basket

When asked what they considered to be among the largest problems Little Rock faces, the top response among faith leaders was divided: 25 percent said poverty-related problems including hunger and homelessness, while 25 percent pointed to issues concerning a lack of spirituality.

Glazier and student researchers also delved into the rates of growth among Little Rock churches. They found that 46 percent said membership in their congregation had increased over the past two years, 10 percent reported a decrease and 39 percent said it had remained almost unchanged, according to clergy self-reports.

"I shared this information with a clergy member," Glazier said. "He said to me, 'Those 39 percent, they say they think they're staying about the same. But if you're not growing, you're dying."

Clergy members who are involved with their community were the largest factor in church growth, according to the survey. Churches that were growing also reported providing more services -- 4.5 compared to the study's average of 3.8 -- and were more likely to take part in interfaith volunteer efforts.

"This is not a finding that we were looking for or that we were expecting to see," Glazier said of the findings on interfaith work. "But we found that when congregations work across denominational lines -- when they're working with others outside of their own faith -- that actually leaves their churches to have a more vibrant and dynamic culture and leads them to be growing."

The study also found a positive correlation between hearing sermons on community engagement and political advocacy.

"When congregants hear clergy members who say, 'Get out and volunteer in the community, here's the opportunity to serve, here's a local problem that we need to help with,' the members attending that congregation internalize [that] message," Glazier said. "And they think, 'Yeah, I can do something about this. I can help here."

Glazier said she hopes to ask about the spiritual benefits of service as work begins for the 2020 Little Rock Congregations Study. A Little Rock Religious Leaders Summit is set for April 11 at UA Little Rock Downtown. It will focus on bringing together religious leaders to talk about "major problems facing our city," present findings from the study and give leaders an opportunity to brainstorm as to how the university's research can be of further help.

Around 170 students have helped with the ongoing study in some way since 2012, when Glazier set out to conduct research with what she described as "an intrepid band of undergraduates" to study five initial congregations. A partnership with the Clinton School of Public Service in 2016 helped expand the research to involve focus groups, clergy interviews and surveys distributed to 17 congregations for that year's Little Rock Congregations Study.

"We talk to the congregation members, the pastors or leaders of the congregation, and we really put our heads together for the research," Rodgers said. "We learned things we would not have learned from just being in the classroom."

As with Glazier, Nikki Partlow-Loyall of Colorado also had not been asked about having a church home until coming to Arkansas to attend college in Little Rock. She said community efforts she had seen in Colorado were more nonprofit-based. Partlow-Loyall became involved with the study through Glazier's undergraduate introduction to survey methods class, and she works at the campus' survey center.

Glazier plans for future surveys that would ask congregation members about the problems they care about and what they are willing to donate time to, and share those anonymous data with congregation leaders.

More information about the Little Rock Congregations Study can be found at research.ualr.edu/lrcs or on Facebook; faith leaders can contact Glazier at raglazier@ualr.edu to RSVP for the Little Rock Religion Leaders Summit April 11. 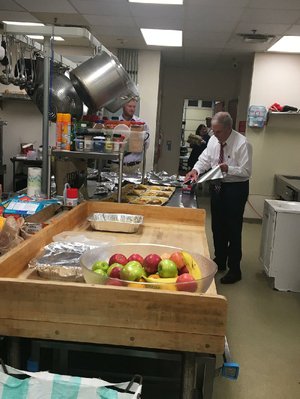 Photo by Special to the Democrat-Gazette
A congregation member of Our Lady of the Holy Souls Catholic Church in Little Rock volunteers in the church’s kitchen to help provide dinner to residents of Our House, one of a number of collaborative efforts between houses of worship and nonprofits studied by researchers at the University of Arkansas at Little Rock.