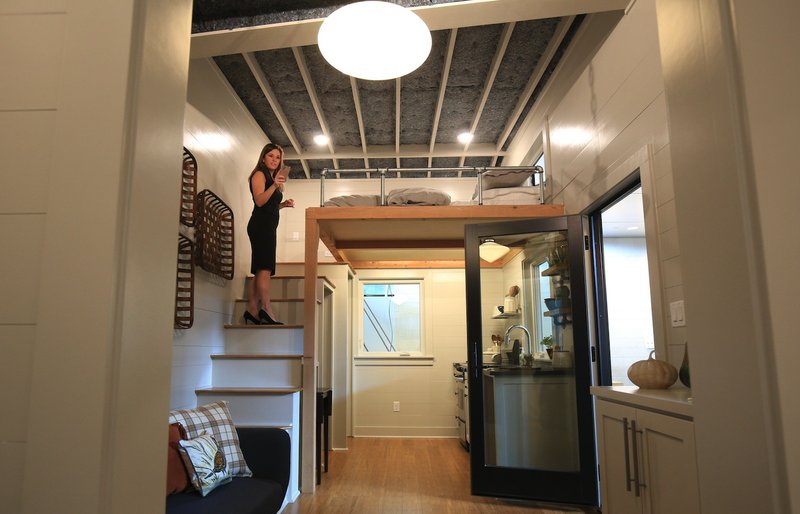 Like a chain reaction, something small will lead to something big. A tiny house at the Clinton Presidential Center will hopefully give that last little boost so that a bigger house can be built for a deserving family.

It's a story with a lot of players that has its roots in the tiny house trend, green living and a desire to help the nation's wounded veterans.

Back in September, the Clinton Presidential Center debuted its "White House Green Building" exhibit, a six-month, three-part exhibit on earth-friendly living. One part of the planned project was to build a tiny house to show visitors how they could "build green." The exhibit is open through March 24.

Beth Franks, who works for Associated General Contractors of Arkansas and helps her husband, Bret Franks, with his construction business, says, "They searched and the one that showed up all over the Internet, the builder was Bret."

So, the Clinton Center asked Bret Franks to build a house for the exhibit and he agreed, but added that, when the exhibit ended, he wanted the house auctioned off with proceeds to go to another project he was working on: Operation Finally Home.

Operation Finally Home is a program that builds mortgage-free houses for wounded veterans. Bret Franks is a member of the Southern Living Custom Builder program, which partners with Operation Finally Home. To date, there haven't been any such houses built in Arkansas but Franks has been raising money to build one in Conway.

"We're really excited," Beth Franks says. "We almost have the funds raised to be able to pull the trigger. The family does not know they're getting this house yet."

So, at 2 p.m. Thursday, interested parties can go to the Clinton Presidential Center and bid on the house in a live auction.

The house is a local labor of love. Dillard's furnished the house (for display only). The Green Corner Store supplied local foods and green cleaning products.

It is a fully green structure, so the ecological footprint will be minimal. The appliances are all eco-friendly. Even the insulation is from recycled denim jeans.

Beth Franks says they don't really have a fundraising goal, but there will be a reserve of $35,000. Bret Franks created the house so it can be taken apart in panels. The reserve fund will allow the construction company to take the house apart, move it and rebuild it in the place of the winner's choosing.

Everything raised beyond that goes to fund the Operation Finally Home house.

What would be a good use of the tiny house?

"The house would be awesome for a lake retreat, a guest house, if they wanted a hunting spot. It's beautiful. It's got a full-sized shower, a real bathroom, a full kitchen," Beth Franks says.

The hope is that the auction will raise enough money to complete the veteran's home. Then, the family will be notified and construction can begin.

Franks says, "It's really cool that it's all organically grown into this awesome way to support a local endeavor right here."