Toll at 49 in New Zealand rampage 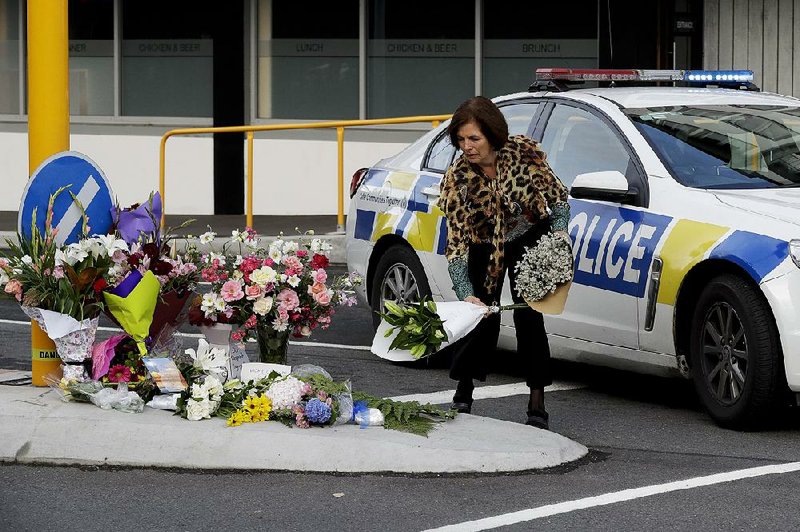 A woman in Christchurch, New Zealand, places flowers Friday at a makeshift memorial near a mosque where a mass shooting occurred Thursday. At least 49 people were killed in assaults on two mosques in Christchurch.

CHRISTCHURCH, New Zealand -- At least 49 people were shot to death at two mosques during midday prayers Friday -- most if not all of them gunned down by a man who apparently used a helmet-mounted camera to broadcast live video of the slaughter on Facebook.

One man was arrested and charged with murder, and two other armed suspects were taken into custody while police tried to determine what role, if any, they played in the coldblooded attack that stunned New Zealand, a country so peaceful that police officers rarely carry guns.

"It is clear that this can now only be described as a terrorist attack," Prime Minister Jacinda Ardern said, noting that many of the victims could be migrants or refugees.

Brenton Tarrant, who police say carried out at least one of the shootings, posted a 74-page manifesto on social media, identifying himself as a 28-year-old Australian and white supremacist who was out to avenge attacks in Europe perpetrated by Muslims.

He also live-streamed in graphic detail 17 minutes of his rampage at Al Noor Mosque, where he sprayed worshippers with bullets over and over, killing at least 41 people. Several more people were killed in an attack on a second mosque in the city a short time later.

At least 48 people were wounded, some critically. Police also defused explosive devices in a car.

Police did not say whether the same person was responsible for both shootings. They gave no details about those taken into custody except to say that none had been on any watch list.

In the aftermath, the country's threat level was raised from low to high, police warned Muslims against going to a mosque anywhere in New Zealand, and the national airline canceled several flights in and out of Christchurch, a city of nearly 400,000.

World leaders condemned the violence and offered condolences, with President Donald Trump tweeting, "We stand in solidarity with New Zealand." Pakistan's Prime Minister Imran Khan and other Islamic leaders pointed to the bloodbath and other such attacks as evidence of rising hostility toward Muslims since the Sept. 11, 2001, attacks in the U.S.

Sen. Fraser Anning of Queensland, Australia, said he is "utterly opposed to any form of violence" and condemned the actions.

But Anning was immediately rebuked after saying that Muslims "may have been the victims today, usually they are the perpetrators."

"The real cause of bloodshed on New Zealand streets today is the immigration program which allowed Muslim fanatics to migrate to New Zealand in the first place," Anning said in a written statement.

Australian Prime Minister Scott Morrison rushed to condemn Anning's statement, writing on Twitter that "remarks by Senator Fraser Anning blaming the murderous attacks by a violent, right-wing, extremist terrorist in New Zealand on immigration are disgusting. Those views have no place in Australia, let alone the Australian Parliament."

"New Zealand, like Australia, is home to people from all faiths, cultures and backgrounds. There is absolutely no place in either of our countries for the hatred and intolerance that has bred this extremist, terrorist violence and we condemn it," Morrison continued.

Former Prime Minister Malcolm Turnbull said Anning was a "disgrace to the Senate and what is worse by spreading hatred and turning Australians against each other he is doing exactly what the terrorists want."

Anning has faced harsh criticism from his colleagues before, especially after he resorted to language reminiscent of the Nazi description of the Holocaust when he called for a "final solution to the immigration problem."

Gun laws in New Zealand are more stringent than they are in the United States, but not as strict as regulations in Australia and much of Europe. In 2017, more than 1.5 million guns were held by civilians in New Zealand, according to a tracking website maintained by the University of Sydney School of Public Health.

New restrictions came into effect, including on military-style semi-automatic weapons, after what was previously the deadliest shooting in New Zealand's modern history. In 1990, 13 people were killed in the seaside town of Aramoana when a resident, David Gray, went on a shooting rampage after an argument with a neighbor.

Violent crime is rare in New Zealand, compared with the rest of the world. Slayings in the country fell to a 40-year low of 35 in 2017, police said, a rate of seven deaths for every 1 million people.

In a news conference today in New Zealand, Ardern said the suspect was found to have five firearms during the massacre: Two semi-automatic rifles, two shotguns and a "lever-action firearm." Ardern said he held a gun license, issued in November 2017.

Ardern said the country's gun laws will change as a result of the carnage, but she did not specify how.

The prime minister said the attack reflected "extremist views that have absolutely no place in New Zealand."

Immigrants "have chosen to make New Zealand their home, and it is their home," Ardern said. "They are us."

At the White House, Trump called the bloodshed "a terrible thing" but rejected any suggestion the white-nationalist movement is a rising threat around the world, saying it is "a small group of people that have very, very serious problems."

The gunman, in his manifesto, deemed Trump "a symbol of renewed white identity."

At the Al Noor mosque, witness Len Peneha said he saw a man dressed in black and wearing a helmet with some kind of device on top enter the house of worship and then heard dozens of shots, followed by people running out in terror.

Peneha, who lives next door, said the gunman ran out of the mosque, dropped what appeared to be a semi-automatic weapon in his driveway and fled. Peneha then went into the mosque to help the victims.

"I saw dead people everywhere. There were three in the hallway, at the door leading into the mosque, and people inside the mosque," he said. "I don't understand how anyone could do this to these people, to anyone. It's ridiculous."

Facebook, Twitter and Google scrambled to take down the gunman's video, which was widely available on social media for hours after the bloodbath.

In the video, the killer spends more than two minutes inside the mosque spraying terrified worshippers with gunfire. He then walks outside, where he shoots at people on the sidewalk. Screams can be heard in the distance as he returns to his car to get another rifle. He walks back into the mosque, where there are at least two dozen people lying on the ground.

After going back outside and shooting a woman there, he gets back in his car, where a song can be heard blasting. The singer bellows, "I am the god of hellfire!" and the gunman drives off before police even arrive.

The second attack took place at the Linwood mosque about 3 miles away. Mark Nichols told The New Zealand Herald that he heard about five gunshots and that a worshipper returned fire with a rifle or shotgun.

The footage showed the killer was carrying a shotgun and two fully automatic military assault rifles, with an extra magazine taped to one of the weapons so that he could reload quickly. He also had more weapons in the trunk of his car, along with what appeared to be explosives.

The author of the manifesto also said he intended to deepen strife in the United States over gun ownership and the Second Amendment.

He portrayed himself as a racist and a fascist and raged against non-Westerners, but said China is the nation that most aligns with his political and social values.

The gunman said he was not a member of any organization, acted alone and chose New Zealand to show that even the most remote parts of the world are not free of "mass immigration."

Last year, New Zealand's prime minister announced that the country would boost its annual refugee quota from 1,000 to 1,500 in 2020. Ardern, whose party campaigned on a promise to take in more refugees, called it "the right thing to do." 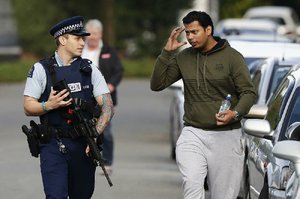 Photo by AP/MARK BAKER
Ash Mohammed (right) talks to a police officer today about his father and two brothers who were missing near the Masjid Al Noor mosque, one of the sites of the mass shootings in Christchurch, New Zealand. 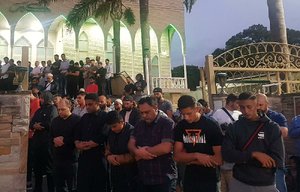 Photo by AP/MARK GOUDKAMP
Worshippers at the Lakemba Mosque in Wakemba, New South Wales, Australia, pray for victims and families of the Christchurch, New Zealand, shootings during an evening vigil Friday. 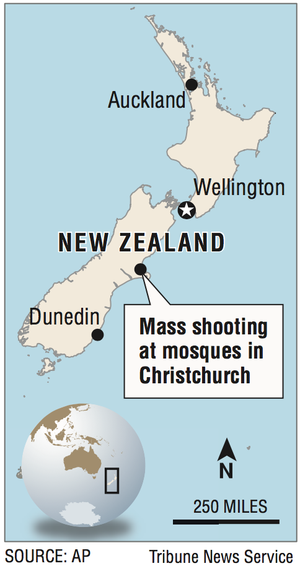