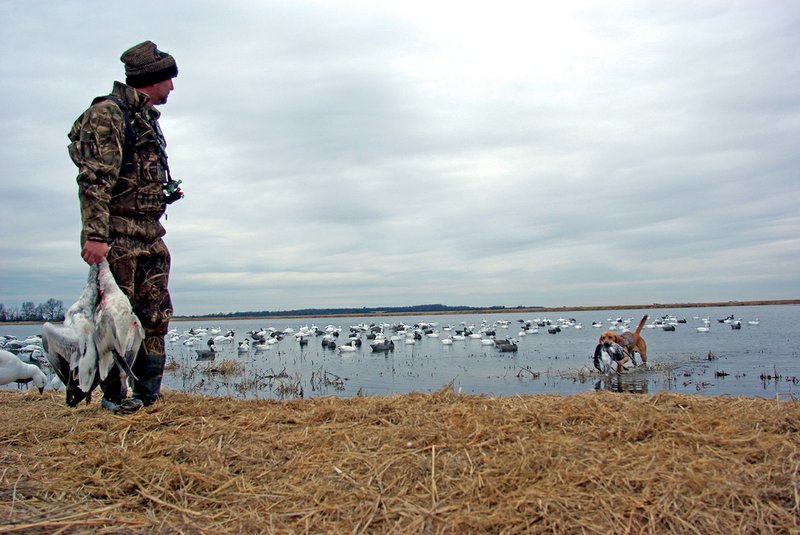 This successful Stuttgart-area snow-goose hunt provided the makings for some delicious wild-game meals for hunter Mike Checkett of Wildwood, Mo.

“I killed 10 snow geese on a hunt near Stuttgart,” a friend called and told me recently. “Should I throw them away, or can you eat them? One of the guys who was hunting with me said they’re not fit for the dinner table, and I should just toss them in the trash.”

Apparently, there are lots of “buddies” out there who have never eaten a properly cooked snow goose because I hear this type of thing quite often. You definitely should not toss the snow geese you kill. First of all, it’s illegal. Second, snow geese are delicious, despite misconceptions.

Most of our state’s snow-goose flock winters in the lowlands of eastern Arkansas. This realm of open farmland provides ideal feeding habitat for large numbers of these birds. It’s not unusual to see a flock containing several thousand geese on a single section of land.

Around 1900, the snow-goose population had ebbed to only a few thousand birds. But during the 20th century and into the 21st, the numbers grew, as snow geese took advantage of increased food supplies along migration routes and in wintering areas. Biologists estimate there are now approximately 3.5 million snow geese in the midcontinent population, a number that may be too large to be environmentally sustainable.

Snow geese are a nuisance to Arkansas farmers and have become so abundant that the geese are destroying their nesting grounds in the Arctic tundra. Not only are they eating themselves out of house and home; they’re destroying critical habitat for other species that share the tundra.

Biologists can conduct eradication efforts to balance the population but do so only as a last resort. Increased hunting opportunities are the first tools wildlife managers use because the hunting seasons cost very little to implement and are much more socially accepted than other population-control measures.

That’s good news for Arkansas hunters, who can participate in a “Conservation Order” hunting season that runs Feb. 3 through April 25. Because of the extreme need for an increased harvest, snow-goose hunting regulations are relaxed during the order. There is no bag limit or possession limit during this late season, and hunters may use unplugged guns and electronic calls. Shooting hours are extended to one-half hour past sunset.

That means those who go afield during this time can take home plenty of delicious goose meat to cook and share with family and friends. And despite what many ill-informed hunters may tell you, snow geese, properly taken care of, provide the finest gourmet dining, whether you’re squatting by a campfire or seated at a candlelit table draped with a lace tablecloth.

Snow geese usually weigh about 5 1/2 to 6 pounds each, with males being slightly larger than females. When plucked and ready to be cooked, each bird should provide about 3 to 3 1/2 pounds of meat.

All you need now are some good recipes. Those that follow have been tried and approved in my home and can serve as a point of departure for your own adventures in the kitchen. Change them, adapt them, season them with your own imagination and ingenuity, but always serve wild game such as snow geese with pride. It can’t be surpassed.

4 boneless snow-goose breast fillets, cooked on a smoker until done

Slice the warm goose breasts into 1/4-inch strips. Place a tortilla in a warm skillet sprayed with no-stick cooking spray and placed over low heat. Top the tortilla with the meat strips from one bird, cover with one fourth of the shredded cheese, and top with another tortilla. Mash flat with a large spatula.

Cut the avocados in half, remove the pit, and use a spoon to scoop out the inside of the fruit. Transfer the avocado to a large bowl, and mash with a fork. Add the remaining ingredients except the lime juice, and stir with a fork to blend well. Stir in the lime juice. Chill, covered, in the refrigerator until ready to serve.

Parboil the goose parts in water to cover them until the meat is tender and falling from the bone. Remove the goose parts from the water, cool and debone. Discard the bones, and reserve the meat.

Make a roux by combining the oil and flour in a big black-iron pot or skillet. Cook slowly over low heat until the roux is a nice caramel-brown color. You must do this slowly, stirring constantly, and not allow the roux to burn. When the roux is the desired color, add the chopped onion, green pepper and celery, and cook while stirring until the vegetables are tender.

Add salt, black pepper and hot sauce, then stir in the hot water and reserved goose meat. Cook over low heat in a covered pot for 1 hour. Stir in onion tops and parsley, heat for 10 minutes, and serve over cooked rice. Serves 8 to 12.

Cut the meat into ¼-inch strips, and marinate overnight in a mixture of the remaining ingredients. Place the meat strips in a dehydrator, or hang on a rack in a slow oven (150 degrees) with the door slightly ajar, until the meat is dry and bendable but will not break. Store in zip-seal plastic bags or jars.