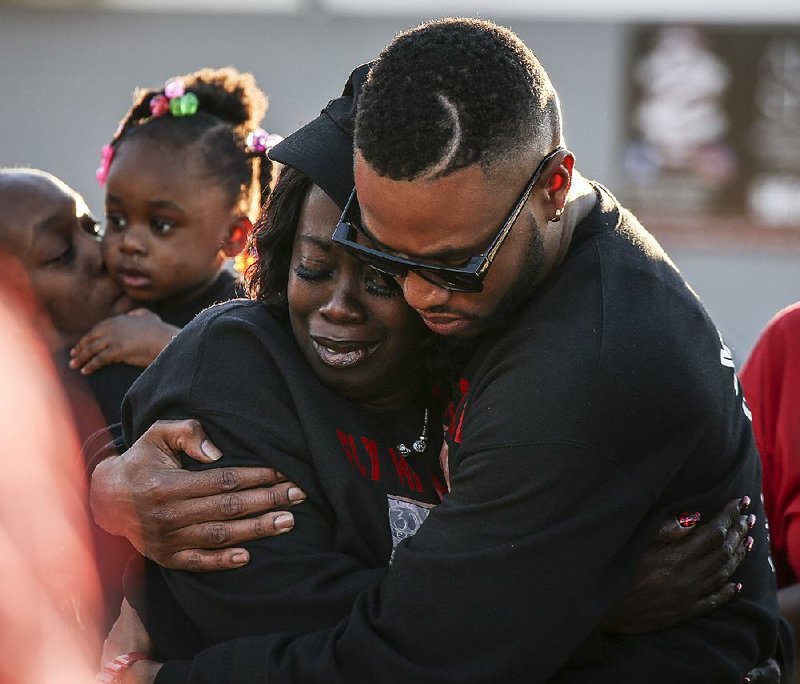 Kimberly Blackshire-Lee, mother of Bradley Blackshire, embraces his cousin Montrell Ussery during a vigil Saturday in Little Rock at the spot where her son died. About 50 people gathered as Blackshire-Lee called for justice and community activism.

In the days since the Little Rock Police Department released video showing one of its officers fatally shooting a man, one corner of the Internet's echo chamber has called for justice while the other says justice has already been served.

Each side presents its opinion with vitriol and conviction, and the differences in perspectives reveal a divide in the Little Rock community that some community leaders say goes deeper than one police shooting.

On Feb. 22, officer Charles Starks confronted 30-year-old Little Rock resident Bradley Blackshire, who was driving a car that had been reported stolen. The encounter ended when Starks, who was grazed by the car as it moved forward, fired his weapon at least 15 times, killing Blackshire.

"I was so angered that it appeared the officer was the judge, the jury and the final decision in a situation that was so avoidable," said Little Rock pastor Richard Johnson of Miles Chapel Methodist Episcopal Church. "I don't want the church, I don't want Miles [Chapel] to stay silent on the social injustices that occur in our city."

The killings of young and sometimes unarmed black men by police catapulted into the public spotlight in 2014 after Ferguson, Mo., teenager Michael Brown was shot to death by a police officer, sparking national protests and rallies.

About 1,900 people died in officer-involved incidents between June 1, 2015, and March 31, 2016, according to the U.S. Department of Justice's Bureau of Justice Statistics. The report -- which is the most recent the department published on this topic -- said 64 percent of the deaths were homicides, 18 percent were suicides and 11 percent were accidents.

There have been seven fatal officer-involved shootings in Little Rock since 2014. It took about 40 seconds on Feb. 22 for Blackshire to join that number.

Both sides of the social media divide -- and the people caught in between -- have begun asking questions. Why didn't Blackshire comply with the officer's demands? Why did Starks step in front of a moving vehicle? At what point did a relatively routine police encounter go so wrong?

On Feb. 22, Blackshire was driving west on West 12th Street, according to information from the department.

The 2018 black Nissan Altima that family members have since said Blackshire borrowed earlier that day passed a license plate reader, a stationary scanner the Police Department acquired in August, according to spokesman Lt. Michael Ford.

The scanner identified the car as stolen, according to a department release.

The car belonged to Hertz Car Rental in Bryant, according to a report from the Bryant Police Department.

The car had been rented on Dec. 10 and was never returned, the report said. On Jan. 4, Hertz employees reported it stolen.

Whether Starks thought the vehicle had just been stolen or knew that it had been missing for more than two months on Feb. 22 is unclear.

In video footage that police released after the shooting, Starks exits his patrol car with his gun drawn and tells Blackshire more than 12 times to get out of the vehicle.

At first, Blackshire can be heard asking why and what he did to necessitate a traffic stop. The officer says he will be told after he gets out of the car, but Blackshire refuses to exit the vehicle, according to the video.

In the next 20 seconds, Blackshire turns the Altima away from the patrol vehicle blocking him in and veers in Starks' general direction. The car rolls forward and appears to graze Starks' hip. Starks fires at least three shots into the driver's side before stepping in front of the moving car and firing a dozen more times from atop the hood of the car.

Blackshire died at the scene. Starks was taken to a hospital where he was treated and released.

IN FRONT OF THE CAR

Peter Moskos is the chairman of the Department of Law, Police Science and Criminal Justice Administration at John Jay College of Criminal Justice in New York City. He is also a former Baltimore police officer.

When he reviewed footage of the Blackshire shooting, one question arose: Why did Starks step in front of the car?

"It's just shocking to see," Moskos said. "Not getting in front of a car is the rare case where general orders, common sense and officer safety coincide."

Sometimes, however, officers end up in front of cars when necessary or out of some mistake, Moskos said.

"This wasn't one of those cases," he said. "It's already moving at that point. It's just a horrible choice. Even then, it's not clear that the threat was lethal."

The Little Rock Fraternal Order of Police announced in a media release in the days after the shooting that they supported Starks and his family, and wanted due process to take its course.

When asked why he believed Starks stepped in front of a moving vehicle, FOP president Ronnie Morgan said he could not put himself in the officer's mind.

Morgan referred to the 1989 U.S. Supreme Court decision in Graham v. Connor, wherein the court said in part that whether an officer employs undue force must be decided by what the officer knew at the time of the incident, not by a summation of the facts in retrospect.

Moskos said he has reviewed scores of officer-involved shooting videos in his research.

"This certainly seems to cross the line of acceptable, excusable mistakes and negligence," Moskos said. "Often when I see these things my first thought is 'I'm glad I wasn't there.' That was not the case in this incident. It just makes no sense."

In conversations about the shooting, another thing comes up again and again: Why didn't Blackshire get out of the car?

"Had he complied with the lawful order, this wouldn't have happened," Moskos said. "But that's not a real issue. Noncompliance is common, daily for officers."

Trisha Rhodes, an assistant professor of criminology and criminal justice at the University of Arkansas at Little Rock, said the shooting could have been avoided if Blackshire and Starks had responded differently.

"It was illegal for Blackshire to refuse these commands and to attempt to get away. Blackshire's refusal to comply undoubtedly escalated the situation," she said via email.

"Finally, it appears that Officer Starks could have stepped further away from the vehicle to better protect himself, which may have prevented him from using lethal force. It is not clear to me that he used excessive force, but the video does suggest that he violated LRPD's policy to move out of the path of an oncoming vehicle."

Johnson, the Miles Chapel pastor, said the department has not indicated whether police knew who was driving the vehicle, meaning Blackshire's criminal history could not have played a role in Starks' assessment of the situation before the shooting.

"We say 'he ordered him to get out of the car 12 times,'" Johnson said. "But does that deserve death?"

Blackshire was sentenced to 18 months in prison in 2016 after violating parole from a 2012 attempted commercial burglary. He was arrested more than a dozen times in his life on charges ranging from disorderly conduct to possession of methamphetamine with intent to distribute, according to court documents.

Police Department records show Starks had been reprimanded multiple times, and a superior officer had recommended his termination at least once before the shooting occurred.

In an internal investigation file concerning an off-duty fight between officers and a citizen, a superior officer said Starks is a "difficult employee to manage" and seems to "gravitate toward conflict." He further said Starks "deliberately undermined the authority of police supervisors repeatedly" and requested that Starks be fired, according to the internal affairs report.

Starks was suspended for 10 days, according to the report.

Johnson said he understands that the situation leading up to Blackshire's shooting was tense, but he said police officers are trained to handle and de-escalate such scenarios.

In 2017, Starks completed training courses in crisis negotiations, civil rights, racial profiling and ethics for law enforcement as a part of his work in the Little Rock department, according to records from the Commission on Law Enforcement Standards.

"It is unsurprising that in 2019 a black man would be fearful to leave his car when ordered by police to do so," Feldman said. "Also, constitutional law and police department policy tend to provide police with a great amount of leeway in their decisions to shoot. This is why conviction or even indictment in such incidents are very rare."

The internal investigation to determine whether Starks violated any department policy is ongoing.

Blackshire's family has in the past few weeks posted numerous photos and tributes to Blackshire. At a news conference after Blackshire's death, Kimberly Blackshire-Lee begged the public not to see her son as a monster, but as a person.

Johnson, who grew up in Little Rock, said he watched media coverage -- and public response -- in the ensuing days and Blackshire was first portrayed as a criminal, then as a man.

"As an African-American male, I remember in the '80s I didn't fear that I was going to be shot because I questioned an officer why they stopped me," he said. "I fear now."

When asked how Little Rock residents could view the same video and see something so different, Johnson said he believes people often see what they want to see, not what is before them.

"I think people want to believe the police are here to protect us, and don't really think about who they're including in that 'us,'" he said. "Am I 'us?'"

After release of the video, Morgan said he continued to support Starks. He said the purpose of the Fraternal Order of Police is not to protect all officers under investigation, but to preserve the rights of the officers to receive fair judgment.

"We don't blanketly support officers that have done something wrong," Morgan said. "Our statement of support for him is, 'We want to let the process play out.' He's afforded due process."

Dawn Jeffrey, director of community relations for Seeds of Liberation, a Little Rock civil rights community organization, said the shooting and the lack of public action in the weeks since have eroded an already fragile relationship between the community and the Police Department.

"Community policing isn't going out and taking pictures with kids," she said. "I think being a good officer is when you can say to another officer, 'This isn't policy, this is against the rules, this isn't right.' I hope that someone has the courage to do that."

How city officials and police administrators handle this shooting, Jeffrey said, will be key in determining whether the community can expect an actual effort to mend the rift.

"I think, with a heavy emphasis on try, they are trying," Jeffrey said. "But I mean, we're on Day 21. I think people in the community are seeing this all the time, and it worries them."

Speaking more than three weeks after Blackshire died, Johnson said he hoped the shooting would not fade from memory, as similar shootings have.

Since demands for social change after previous officer-involved shootings fizzled, Johnson fears little has been accomplished.

"We have become desensitized," he said. "It's happened so many times with the same result. Do we still expect anything to change?"

Speaking from his office, Johnson leaned back in his chair and chose his words carefully, his pastor's voice booming against the church's low, tile ceiling.

"We'll lift up our voices, and we'll remember Mr. Blackshire," Johnson said. "But when the hype dies down, it's just another name in a long list."