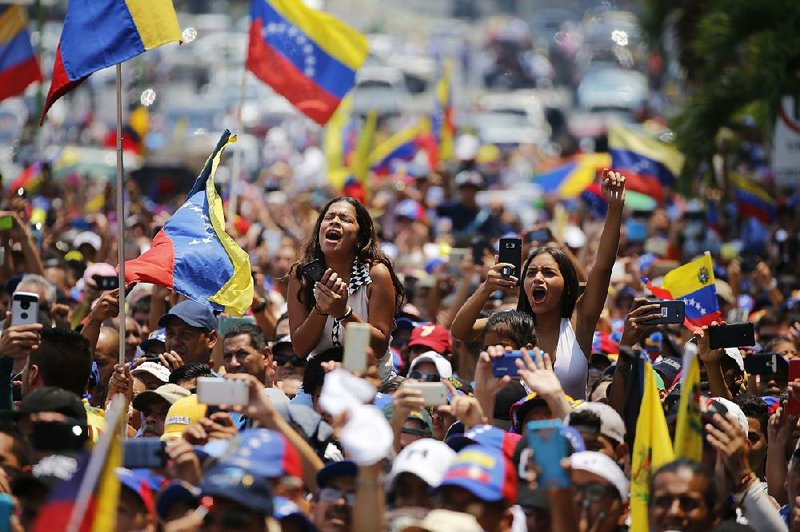 VALENCIA, Venezuela -- Venezuelan opposition leader Juan Guaido embarked on a new stage of his campaign to oust President Nicolas Maduro on Saturday as the government staged its own rival rally in the capital of Caracas, a pattern which has unfolded repeatedly as both sides attempt to convey strength.

Addressing large crowds in the northern city of Valencia, Guaido pledged to deliver a better life for struggling Venezuelans as he began a planned tour of the country gripped by an economic and political crisis.

"We're stronger than ever," said U.S.-backed Guaido from a podium draped with a large Venezuelan flag.

The leader of the opposition-controlled National Assembly also drew cheers with his denunciations of Maduro, although he warned that difficult challenges still lay ahead.

Since returning to Venezuela from a Latin American tour on March 4, Guaido has led anti-government activities in the capital of Caracas and announced plans to take his message to other regions. But he has been unable to force Maduro to step down and hold elections.

On Saturday, the government organized its own flag-waving demonstration in Caracas, which attracted large numbers of people to the street.

Maduro has remained defiant despite heavy pressure from the United States and other countries arrayed against him, managing to retain the loyalty of most of Venezuela's military leaders.

The latest demonstrations come as the South American country recovers power in many areas after widespread blackouts inflicted misery on millions of people, cutting off running water and communications.

Guaido and the U.S. said corruption and mismanagement by the government caused the outages, while Maduro claimed that the U.S. had launched a "cyberattack" on the national grid in an ongoing attempt to oust him. Maduro has routinely described Guaido as a collaborator in a U.S. coup plot.

Coinciding with the demonstration in Valencia, opposition lawmakers organized smaller anti-government gatherings in the northwest city of Maracaibo, where many areas were devastated by looting during the blackouts.

Guaido declared himself interim president in January, saying Maduro's re-election last year was illegitimate because major opposition figures were not allowed to run.

Separately, a German freelance journalist jailed in Venezuela since November on espionage charges was released Friday within weeks of two other reporters being expelled from the tumultuous South American nation, his parents and a human-rights attorney confirmed.

A court in the capital of Caracas ordered journalist Billy Six to be let go under the conditions that he report back every 15 days and not speak to media, attorney Carlos Correa of Public Space told The Associated Press.

Six, 31, won't be deported from Venezuela, but Correa also said that the journalist isn't prevented from leaving if he chooses.

"We are overjoyed!" his parents Ute and Edward Six posted on Facebook, also railing against Germany's foreign ministry for not doing enough to help their son, who spent 119 days in solitary confinement.

A resident of a Berlin suburb, Six has traveled the globe as an independent journalist for 12 years, publishing his reports in right-wing outlets. His arrest has generated little interest in mainstream German media, which relatives blame on his conservative affiliation.

In Venezuela, he documented the economic collapse and mass migration from the socialist country, landing in jail on espionage charges that his family rejected as false.

Six turned his attention to Venezuela over a year ago. His father previously told The AP that his son entered the country legally but was unable to secure journalist credentials required by Venezuela to work as a reporter.

While the government of Maduro has little tolerance for critical coverage by local press, foreign journalists who cross officials are usually spared the same harsh treatment. In the past, foreign reporters, like Six, who weren't accredited would stay in custody for just a few days before being ejected from the country.

The release of Six follows the recent deportation of two other journalists.

Venezuelan security forces seized U.S. freelance journalist Cody Weddle earlier this month at his apartment in Caracas where he had worked for over five years. Most recently, Weddle sent dispatches to a Miami TV station.

Univision's Jorge Ramos and his team were also deported in late February when Maduro cut short an interview during which he was shown video on an iPad shot a day earlier of young Venezuelans eating food scraps out of the back of a garbage truck.

Information for this article was contributed by Scott Smith and Fabiola Sanchez of The Associated Press.