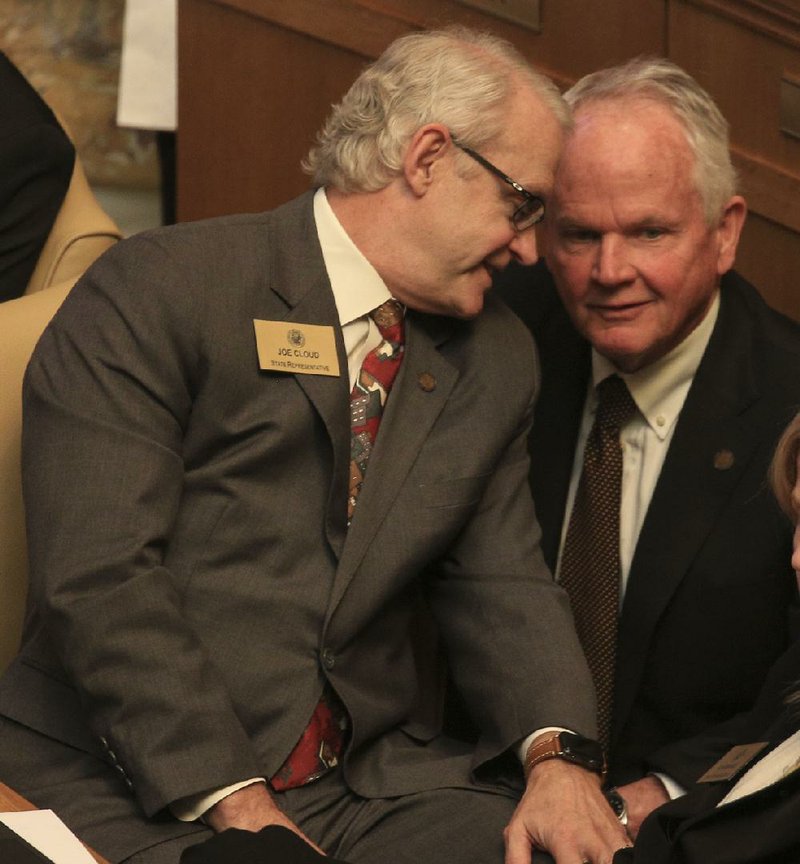 After every physician in the Arkansas House spoke against it on Monday, a bill to expand telemedicine in Arkansas failed by one vote.

House Bill 1220 by Rep. Dan Sullivan, R-Jonesboro, would amend the definition of "professional relationship" in the state's Telemedicine Act to extend remote medical care availability to patients who have established a patient-doctor relationship with a physician through a phone conversation and medical records review.

Rep. Lee Johnson, R-Greenwood, an emergency doctor; Rep. Stephen Magie, D-Conway, an ophthalmologist; Rep. Joe Cloud, R-Russellville, an obstetrician-gynecologist; and Rep. Deborah Ferguson, D-West Memphis, a dentist, each spoke against the bill, stressing the importance of a clinician being able to physically examine a patient either in person or through a video call.

Proponents of the measure said it would expand patient choice and private businesses' health insurance coverage offerings. They also said it would bring Arkansas law closer in line with other states.

After the legislation was rejected by a vote of 50-36 with four present votes, the House adopted the clincher motion, making it harder to revive the bill later this session.

The Senate on Monday approved legislation that would allow current private school students with disabilities to participate in a program that uses public funds to pay for private tuition.

The Senate voted 38-2 to approve House Bill 1467 by Rep. Mark Lowery, R-Maumelle, which would allow private school students with individual service plans to participate in the Succeed Scholarship program. The bill goes back to the House to consider a Senate-approved amendment to the bill.

Lowery has said the bill corrects a past bill-drafting error that excluded private school students. Currently, students with individual education plans can access Succeed Scholarship funding, but those plans are only developed by public school districts.

Ethics-inquiry bill is sent to governor

The Senate on Monday sent the governor legislation that would grant the Arkansas Ethics Commission up to 60 more days to complete investigations, hearings or final actions on ethics complaints.

The bill states that the commission has inadequate staffing and funding to complete pending investigations of complaints filed in 2018 "and that this act is immediately necessary because the integrity of our governmental system is at risk without adequate completion of pending investigations."

The Legislature earlier voted to increase the staff and funding for the commission in fiscal 2020 starting July 1.

The Senate approved legislation that would change the position name of the state Board of Finance's chief investment officer into the chief compliance officer.

The Senate voted 35-0 to approve Senate Bill 454 by Sen. Jason Rapert, R-Conway, sending the bill to the House for further action.

The Finance Board's chief compliance officer would work with and at the direction of the treasurer consistent with the policies and directives of the board. The officer would serve at the pleasure of the board under SB454, just like the chief investment officer does under existing law.

The Arkansas Legislative Black Caucus on Monday considered -- and offered pointed skepticism of -- two pieces of legislation that would recalculate funding for state colleges and universities, with greater weight placed on "outcomes-based funding."

In 2017, the Department of Higher Education refocused its funding model so that schools were rewarded more for their number of graduates, rather than just the number of students who enroll. Sen. Breanne Davis, R-Russellville, has filed legislation this year that would accelerate the process of pinning funding for institutions to their "productivity."

Members of the caucus were shown data on Monday that showed universities in south Arkansas, including the historically black University of Arkansas at Pine Bluff, would likely lose funding under Davis' plan.

"Hear me out, and let me continue the conversation before you draw a line in the sand," Davis asked the caucus during a discussion of her bills, Senate Bills 508 and 509.

The caucus, which has no voting authority, did not take any action on Davis' bills.

Sen. Linda Chesterfield, D-Little Rock, was one of several members to express concern that the proposed legislation would harm low-income and minority students, calling the proposed change "disturbing."

Veterans who have had their concealed carry rights terminated because of voluntary mental health treatment could regain their rights under legislation passed by the Arkansas House on Monday.

HB1748 would allow any veteran who has voluntarily sought treatment at a mental health institution, and as a result lost the right to apply for a concealed carry permit, to petition a court to regain his rights. The petitioning veteran would also have to provide medical records to the court.

Richmond said the potential to lose concealed carry rights served as a "barrier" for veterans in seeking treatment.

A bill allowing optometrists to perform a broader range of eye surgeries cleared a Senate committee after a nearly three-hour hearing on Monday evening.

House Bill 1251 would allow optometrists to administer injections around the eye, remove bumps and lesions from the eyelids, and perform certain types of laser surgery.

Supporters say the measure would allow optometrists to use more of their training and provide easier access to eye care for patients in rural areas of the state.

Opponents, including groups representing ophthalmologists and other physicians, say optometrists don't have the training required to safely perform the procedures.

Among those who testified to the Senate Committee on Public Health, Welfare and Labor against the bill on Monday was Charlotte Alison, who said her vision was damaged by a botched laser surgery performed by optometrists in Louisiana.

The Senate sponsor of the bill, Sen. David Wallace, R-Leachville, who is vice chairman of the committee, said there haven't been any reported malpractice cases involving the procedures in the four states -- Alaska, Kentucky, Louisiana ad Oklahoma -- where optometrists are allowed to perform them. In 14 other states, optometrists are allowed to perform some but not all of the procedures that would be allowed under HB1251, he said.

"I can't imagine that with that many states doing these procedures, and for the number of years they've been taking place, that if there was that many bad outcomes, that we would not be hearing about it," said Rep John Eubanks, R-Paris, the bill's lead sponsor.

The House passed the bill in a 70-19 vote on March 6. On Monday, the eight-member Senate committee advanced it in a 5-2 vote, with one member absent. It next goes to the full Senate.