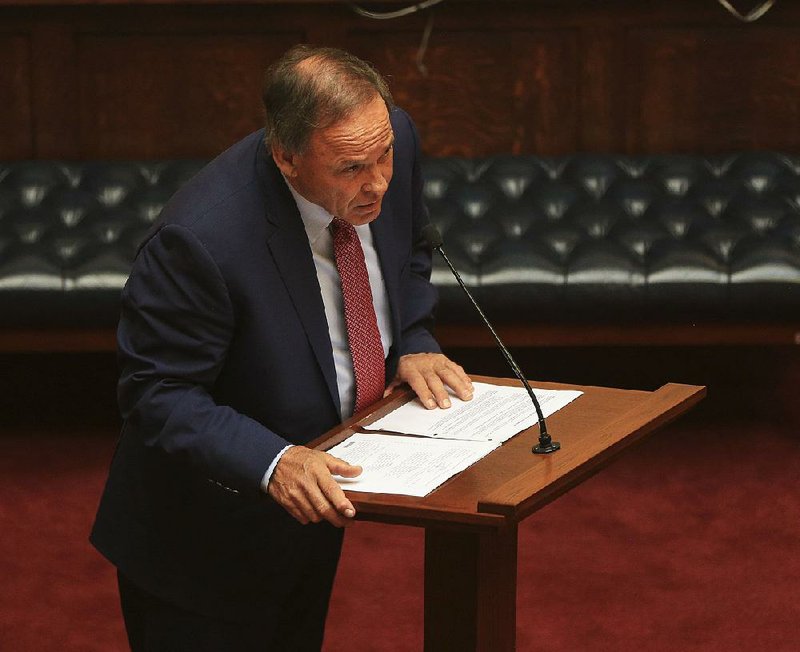 Sen. Gary Stubblefield, R-Branch, answers a question Monday in the Senate chamber about Senate Bill 278 that would add to the standards for abortion clinics. More photos are available at arkansasonline.com/319genassembly/.

A bill approved by the Senate on Monday would lengthen from 48 hours to 72 hours a woman's "reflection period" before she has an abortion and also would require clinics to report abortions that result in live births to the state Department of Health.

Senate Bill 278 -- sponsored by Sen. Gary Stubblefield, R-Branch -- would require doctors who perform abortions to provide women with a description of the procedure, medical risks, available medical assistance and their child-support rights, with that information being given 72 hours before performing the abortion, except in case of a medical emergency.

On the other side of the Capitol, the House approved a bill that would require physicians to direct women to research how to reverse the effects of medication they've taken that causes abortions.

SB278 passed 28-6, with Senate Democrats Will Bond of Little Rock, Linda Chesterfield of Little Rock, Joyce Elliott of Little Rock, Stephanie Flowers of Pine Bluff, Keith Ingram of West Memphis and Greg Leding of Fayetteville voting against the measure. Sen. Eddie Cheatham, D-Crossett, did not vote. The 35-member Senate has 26 Republicans and 9 Democrats.

The House later Monday referred the bill to the House Committee on Public Health, Welfare and Labor.

Stubblefield credited the 48-hour waiting period now in force in Arkansas and several states in the nation for saving the lives of "700 babies."

Elliott took issue with the number and the characterization quoted by Stubblefield.

"We know that from information we have gotten from other states that added the 24 hours to the waiting period, Sen. Elliott," Stubblefield replied.

Elliott continued to push for validation of the claim.

"So that may or may not be fact?" Elliott asked.

"We would not know 100 percent," Stubblefield said. "But we do know that since those laws have been changed, there have been 700 babies' lives that have been saved."

Bond asked whether anyone had questioned the constitutionality of SB278, to which Stubblefield said no one had brought up the issue.

SB278 would also require that patients be offered 24-hour telephone consultation availability with a registered nurse or doctor. The bill also would mandate that the facility have a written procedure for emergency transfer of a patient to an acute care facility.

The bill would also require that an abortion facility have drugs, oxygen, intravenous fluids and other emergency equipment on-site; be located within 30 miles of a hospital that provides gynecological or surgical services; and have all of its staff members be CPR-certified.

Abortions that result in live births would be reported to the Health Department, which would be required to publish an annual report on the subject, according to SB278.

A portion of the bill was amended to remove a provision that would have made it a Class D felony -- instead of a misdemeanor -- if a person "intentionally, knowingly, or recklessly" performed an abortion before 72 hours are up, except in emergencies.

The change came after some members of the Senate Public Health, Welfare and Labor Committee raised concerns last month about the felony provision, saying they didn't want to punish doctors who were acting in good faith to save a mother's life.

The current version of the bill would allow civil action against the abortion provider for compensatory and punitive damages, including medical malpractice, and professional disciplinary action up to a one-year license revocation.

Also on Monday, the House voted along mostly party lines to send to the governor Senate Bill 341, which would require that doctors direct women to the Internet to seek out information on "abortion pill reversal," after the doctors give patients the first dose of abortion-inducing medication.

The legislation prompted concern from two women in the House Democratic caucus, who said that medical information on the Internet is not always accurate or healthy.

Rep. Nicole Clowney, D-Fayetteville, said the bill would create a state "mandate" to send women to websites such as Google, where lawmakers or state agencies cannot control what results appear atop search lists.

The sponsor of the bill, Rep. Joe Cloud, R-Russellville, an obstetrician-gynecologist, said the bill is intended for a woman "who starts the medical abortion pill process and then changes their mind."

In addition to directing women to research "abortion pill reversal," doctors would be required to direct women to the Health Department's website, as well as any applicable telephone numbers.

Rita Sklar, executive director of the American Civil Liberties Union of Arkansas, said in an interview afterward that she takes exception to the Legislature making decisions for women.

"It's so insulting that there are both men and women at the Legislature that think women need to be forced to think about such a personal, private decision that should have nothing to do with the government," Sklar said. "Women don't need to be told to think about things that affect their lives. We're not children."

Jerry Cox, of the faith-based Family Council, said the legislation was "very responsible."