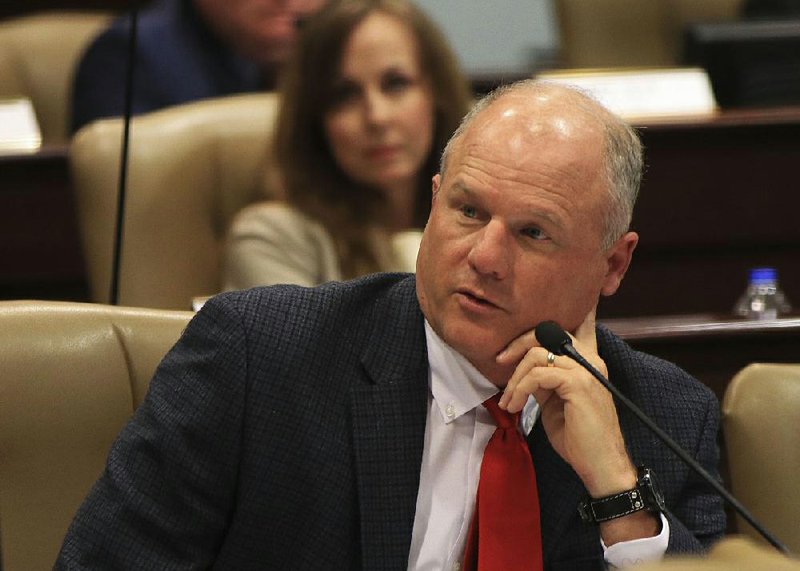 Legislation that would use funds raised from new tobacco and marijuana taxes to assist the University of Arkansas for Medical Sciences' bid for a National Cancer Institute-designated facility failed to clear the Senate on Monday.

The Senate's 17-12 vote on House Bill 1565 by Rep. Andy Davis, R-Little Rock, fell one vote short of the 18 required for approval. The Senate then expunged the vote to clear the way for another vote later. Sen. Jonathan Dismang, R-Searcy, said he will ask the Senate to approve the bill today.

The Senate initially voted 20-12 on the bill before Sen. Terry Rice, R-Waldron, and several other senators called for "sounding the ballot." In that procedure, a Senate official calls the name of each senator recorded as voting for the bill. Votes are struck when a senator's name is called and he or she is not at his or her seat. The affirmative votes of Sens. Linda Chesterfield, D-Little Rock, Joyce Elliott, D-Little Rock, and Mark Johnson, R-Little Rock, were struck.

A few hours earlier, the Senate Revenue and Taxation Committee recommended Senate approval of a separate bill that would levy taxes on e-cigarettes and vaping products and a special excise tax on cigarettes. Those tax revenues would be used to provide about $97 million a year to pay for income tax cuts for low- and middle-income Arkansans.

Hendren agreed to delay asking the Senate to approve the legislation until Wednesday, after Sen. Jason Rapert, R-Conway, who is co-sponsor of the bill, said he would like the opportunity to meet with certain people before he votes on the bill.

Beyond Hendren, the bill has 16 co-sponsors in the 35-member Senate. Rep. Lee Johnson, R-Greenwood, is the sponsor of the bill in the 100-member House and has 39 co-sponsors there.

UAMS' Winthrop P. Rockefeller Cancer Institute hopes to obtain National Cancer Institute recognition. There's been a bipartisan push in the General Assembly to pursue the recognition, and lawmakers established a trust fund to hold private and public dollars raised for the effort. The goal is about $30 million.

There are 70 National Cancer Institute-designated facilities in 36 states, but none in Arkansas.

Public health advocates say that bringing such a facility to Arkansas would expand cancer treatment options, but several advocacy organizations have publicly opposed the bill because they see several provisions as handouts to the tobacco industry.

Dismang told senators that HB1565 would increase general revenue by about $10 million a year and $5.4 million would go to the National Center Institute Designation Trust Fund at UAMS. He said the rest of the money would be used for items discussed between lawmakers and the governor about the Revenue Stabilization Act that distributes general revenue to state programs.

HB1565 would dedicate receipts from the sales and special privilege taxes on medical marijuana, which is soon to go on sale; increase the required business markup on cigarettes from 7.5 to 9.5 percent; raise the tax on packs of about 32 cigarette papers by 50 cents to 75 cents; and eliminate the current border zone tax rate for cigarettes.

The bill would become effective on Sept. 1, the Department of Finance and Administration said in a legislative impact statement on the bill.

The bill also would increase the minimum tobacco-buying age in Arkansas from 18 to 21 by 2021. That would reduce general revenue by roughly $5 million a year, Dismang said.

But Garner, who voted against the bill, said he has "a huge problem" with creating an age restriction to prevent "grown men and women" from buying the products.

He also said he was worried that the age restriction would create a black market for tobacco products.

Arkansas is one of 18 states that don't prevent cities and counties from further regulating tobacco, according to the U.S. Centers for Disease Control. Davis has said that disparate regulations on the local and state levels make it more difficult for state tobacco regulators to enforce the law.

The public health advocacy groups also oppose phasing in the increased tobacco-buying age, instead backing a bill that passed the House committee that would raise the age immediately. Both bills would allow military members who are at least 18 to purchase tobacco.

The Senate Revenue and Taxation Committee advanced Senate Bill 571 by Hendren, but first rejected Garner's motion to delay consideration of the bill until Wednesday. The committee also heard several vape store owners warn the bill would harm more than 300 vaping stores in the state or force them to close.

Garner said the bill was filed Thursday and is a major change in tax code. He said he received its projected fiscal impact statement from the state Department of Finance and Administration just Monday morning.

Hendren said he held a news conference on the bill on Thursday and he released a projected fiscal impact then.

"I would prefer to run with it today because we are approaching the end of the session [and] the way bills like these are killed is by delay and stall and give people time to bring pressure to bear on members," Hendren said.

Hendren said his bill would create an earned income tax credit trust fund to "make sure that the dollars were there before we proceeded" on creating the tax credits. He said the credits would start in 2021 and be disbursed starting in 2022.

Hendren said SB571 would save low-income families about $38.5 million a year.

"I know that probably the most controversial part of this is the [earned income tax credit]," he said. "Most of the dollars that are going in this tax relief are actually going to the rate cut and the standard deduction increase."

Creating an earned tax credit would focus that tax relief on people making less than $50,000 a year, Hendren said.

A single mother with two children who is making about $19,000 a year and would have about a $339 tax bill would receive a refund for $77 from the state under this bill, he said.

Hendren said his bill also would:

• Levy a 20 percent special excise tax on cigarettes sales, which he said equates to about 80 cents a pack. The state's current tobacco tax is $1.15 per cigarette pack. This tax would become effective Sept. 1, according to the finance department.

• Make e-cigarettes and vaping products subject to the same taxes as traditional tobacco products, which would equate to about a 67 percent tax on vaping products. This tax would become effective Sept. 1, according to the finance department.

Garner questioned whether the bill would require a three-fourths vote for approval.

But Hendren said that attorneys for the Bureau of Legislative Research advise him his bill would require a majority vote for approval.

"This will now take us to the highest rate of any state around us, correct?" Rapert asked.

Hendren said it would "basically match us with Oklahoma."

"When I think about this in light of the vape shops, I'm told that basically every vape shop is going to go out of business in the state," Rapert said.

But Hendren said the finance department projects the tax on e-cigarettes and vaping products would raise about $5.5 million in fiscal 2020 and then $7.4 million in fiscal 2021, so most of the increased revenue would be raised by the 20 percent special excise tax on cigarette taxes.