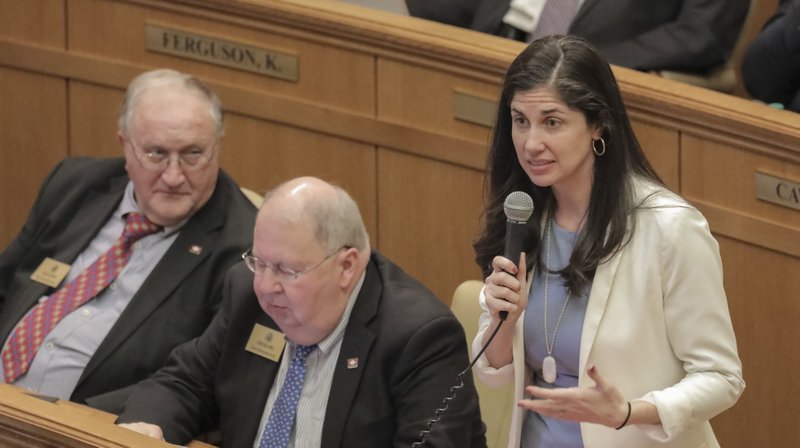 Rep. Nicole Clowney (right) , D-Fayetteville, is shown asking questions during a House session at the capitol in Little Rock. Representatives, from left, Bruce Coleman and Steve Hollowell, listen in.

House Republicans on Tuesday sunk a measure that would have given local and state law enforcement authority to enforce federal gun laws on convicted domestic abusers.

The legislation, House Bill 1655 by Rep. Nicole Clowney, D-Fayetteville, was defeated 35-38, needing 51 votes for passage. Democrats, joined by about a dozen Republicans, voted for the measure, which came out of committee last week with little opposition.

The bill would mirror federal law in making it a state offense for someone convicted of misdemeanor domestic violence to own a gun. Clowney said the Arkansas State Police cannot enforce that law other than to call federal authorities.

"A vote against this bill amounts to a vote to protect domestic abusers who are in violation of federal law," Clowney said in a text message after the failed vote.

On the House floor, however, several Republicans questioned whether Clowney's bill would have created a new pathway toward seizing guns.

In the House Judiciary Committee last week, the only person who could be heard voting against the bill was Rep. Cindy Crawford, R-Fort Smith. She spoke against the bill on the House floor Tuesday, saying she feared HB1655 would set a "precedent for a misdemeanors taking away gun rights."

Four other committee members voted against the bill on the House floor.

One member, Rep. Brandt Smith, R-Jonesboro, said he had spoken with other lawmakers after the bill got out of committee and they raised additional concerns.

"What if you've got a vindictive spouse and they're using this as a way to get back at someone?" Smith said, further explaining that a spouse could make a claim of domestic abuse as a way to strip his partner of a weapon.

But Rep. Douglas House, R-North Little Rock, who voted for the bill Tuesday, said his colleagues raise a nearly identical scenario, but he still supported the bill because of an amendment added by Clowney.

That amendment would have created an avenue for people with misdemeanor domestic violence convictions to have their records sealed and their gun rights restored. The state police testified in committee that because there is no state prohibition of gun possession by people with misdemeanor domestic violence convictions, there is no path for them to restore their federal gun rights.

"This bill is not intended to punish anyone for life," Clowney said.

Clowney said Tuesday she was unsure whether she would attempt to revive the bill this session.

In 2016, Arkansas ranked fourth in the nation in the homicide rate of female victims, according to a report by the Violence Policy Center. Most of those murders were committed by boyfriends or spouses using a gun, the report found.