Senate Bill 620 by Sen. Blake Johnson, R-Corning, would create a five-year pilot program in Arkansas' most populous county that would use $3.5 million a year in public funds to send about 500 students to private schools.

The "Capital Promise Scholarship" could also follow those students into college if they continue their educations at higher education institutions in the county.

The bill proposes evaluating the program's effectiveness to determine if it should be expanded beyond Pulaski County in the future.

Gov. Asa Hutchinson pledged in a news release to allocate his office's discretionary funds to cover the $3.5 million-a-year price tag.

"This is an important and meaningful step in providing low-income families with a choice in the education their children receive," the Republican governor said in the release. "Pulaski County offers a unique opportunity for us to effectively evaluate a school choice scholarship program and measure student achievement. ... Every student deserves the opportunity to reach his or her potential, and this bill will help them do just that."

If approved by the General Assembly, the Capital Promise Scholarship would be the state's largest school-choice program. Currently, the state offers similar private-school scholarships to about 250 students with disabilities under the Succeed Scholarship Program.

Voucher programs have been debated nationwide. Proponents believe that parents should be able to use public funds to send their children to the most appropriate schools, whether private or public, while opponents feel that such programs take resources away and undermine public schools.

Capital Promise Scholarships, according to SB620, would be available to Pulaski County students entering kindergarten at a private school or transferring from a public school after attending for at least one semester. It also would be available to students whose family incomes are below 185 percent of the federal poverty level ($47,637 for a family of four in Arkansas). It would begin in the 2020-21 school year and end in 2025.

J.R. Davis, a Hutchinson spokesman, said the bill is intended to benefit only students who qualify for federal lunch-buying assistance, which is available to families with incomes up to 185 percent of the poverty line.

The program would offer $5,000 scholarships for students who continue in the program through college. Those students would have to graduate from high school with at least 2.5 GPAs, and they may attend Arkansas Baptist College, Philander Smith College, University of Arkansas-Pulaski Technical College, University of Arkansas at Little Rock or Shorter College. (Pulaski Tech and UALR are public; the others are private.)

The funds, under the proposal, must first be spent on tuition, fees, uniforms and textbooks; but remaining funds may be used on tutoring, college-placement exams, transportation, after-school programs, industry-certification exams, speech-language pathology, physical therapy, dyslexia and other support services.

Rep. Ken Bragg, R-Sheridan, the bill's House sponsor, said he was optimistic about the bill's chances in the House, particularly because it's a pilot program with a sunset, or expiration, date.

"I think the pilot project is a good concept because it gives us a good period of time to evaluate," Bragg said.

Bragg added that there are several accountability measures included in the bill, which would require annual oversight and academic progress reports to lawmakers and the governor, as well as feedback from parents involved in the program.

Elliott said an experiment with vouchers in Arkansas is unnecessary and that state leaders could look to other places where vouchers have been around for decades, like Milwaukee, to gauge their effects.

"We're going to do something special for these few kids?" Elliott said. "That goes against everything the state is supposed to be doing. We're supposed to be responsible for the education of all our kids, not just some."

The bill states that Pulaski County is selected for the 5-year pilot program because of the concentration of eligible students, a competitive non-public school market, and the location of various public and private higher-education institutions.

Typically, when a student leaves a traditional school district, the district becomes ineligible for receipt of state aid for that student.

The bill includes a provision that a school district that is operating under full state authority shall not have its state funding reduced as a result of any loss of public school students to the Capital Promise Scholarship pilot program.

Of the four districts in Pulaski County, three would stand to lose state funding for any students opting for the proposed tuition program. The Little Rock district has been operating under state control -- without an elected school board and under the direction of the state education commissioner -- since January 2015.

Current state law directs the state Board of Education to return to local control within five years any school district that has corrected the problems that led to state takeover. The Education Board also has the authority to take other actions against a state-controlled district that is not considered eligible for release to a locally elected board. That can include consolidating or reconstituting the district or even a partial or limited-authority release to a local community.

The state Education Board's deadline for acting on the Little Rock district is January 2020, which is before the proposed scholarship program -- if it becomes law -- could be operational.

Johnson, the bill's sponsor, said he expects the first Capital Promise Scholarship to be awarded in January 2020.

Bobby Acklin, superintendent of the North Little Rock School District, said Wednesday night that he had just become aware of the bill and was about to read the 16-page document.

"I generally don't support vouchers," Acklin said using a term that is not in the bill but is typically defined in education as payment of private school costs with taxpayer money.

Acklin said he anticipates meeting in the coming days with superintendents of the other districts in Pulaski County and with other public education organization leaders to decide how to "convince somebody that this is not for Pulaski County."

All four Pulaski County school districts are closed for spring break this week.

A text message to Little Rock School District Superintendent Mike Poore about the bill Wednesday evening was not immediately returned.

Elliott, a retired teacher, said the bill would be yet another hit to the Little Rock School District.

"Little Rock is on quicksand all the time," she said. "We cannot get to any sense of any sustainability or stability because every time we turn around somebody is pulling out another rug."

"We have all these charter schools in Little Rock, and we're going to do something else here. When the governor says there's a critical mass of kids who are eligible here, well, who set the eligibility requirements? He did. If it's about [students who qualify for federal lunch assistance], you can look at the data. They're all over the state," she said.

Senate Bill 620 calls for private schools to notify the Department of Education of their intent to participate in the scholarship pilot program. The state agency would approve a private school as eligible to participate if it met requirements established by the Arkansas Nonpublic School Accreditation Association.

The association, according to its 2018-19 membership directory, has 97 member schools -- 73 of which are accredited and 24 that are classified as associate schools.

The association's executive director is Kristine Grelle of Rogers. The president of the organization's nine-member board of directors is Gary Arnold, head of school for the Little Rock Christian Academy.

The bill states that a private school receiving payment from the pilot program will not be considered an agency of the state or a public school district, and the curriculum and services for the students at the schools will not be subject to the regulatory authority of the state Education Board.

The recipient school may be required to certify that a scholarship student is enrolled and attending the private school.

The school must administer or make provisions for the participating students to take a nationally recognized norm-referenced test as established by the state Education Board -- unless a student has an education plan that exempts the student from such a test.

A norm-referenced test is one that compares the achievement level of an individual student and school with the sample of students who take the same test in the state and nation. The Iowa Test of Basic Skills and the Standard Achievement Tests are examples of norm-reference tests.

Most public school students are not taking either of those tests currently but annually take the ACT Aspire tests in grades three through 10. The ACT Aspire is not widely used by other states, although some districts within states use the Aspire.

The scholarships proposed by SB620 would be administered by a nonprofit that can apply to state Education Department.

The charity may use up to 3 percent of the scholarship funds received from the state for administrative expenses, according to the bill, and it must undergo an annual financial audit.

The organization would be barred from charging a fee to students applying for scholarships, and it couldn't restrict parents from selecting certain schools. 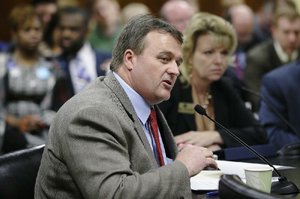 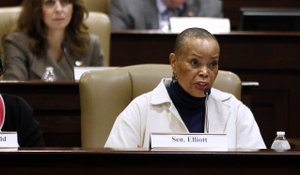