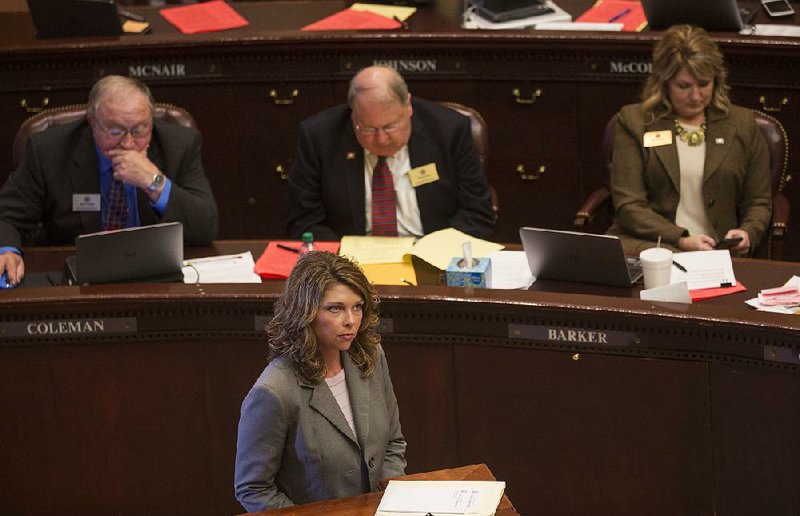 Rep. Michelle Gray, R-Melbourne, is shown in this file photo.

The Senate on Wednesday approved a bill that would double a fee on cellphones to fund improvements to the state's 911 system.

With no questions or opposition, House Bill 1564 -- sponsored by Rep. Michelle Gray, R-Melbourne -- passed in the Senate with a 29-3 vote after Sen. Jason Rapert, R-Conway, presented it.

The bill would allow the state to upgrade to the "Next Generation 911" that would pave the way for processing all types of emergency calls, including voice, text data and multimedia platforms.

The fee would increase from 65 cents to $1.30 for each individual device, including tablets and other devices that use data. A 10 percent tax will be tacked onto prepaid cellphones.

The tax would generate about $12 million a year, Rapert said.

The bill also would fund upgrades and maintenance for the Arkansas Wireless Information Network and would establish the Arkansas 911 Board in place of the current Arkansas Emergency Telephone Services Board.

HB1564 requires an annual report of fund disbursements but does not specify what should be contained in the report.

HB1564 would reduce the state's 127 public safety answering points -- a central location where all 911 calls or communications are initially answered that is operated on a 24-hour basis -- to no more than 77.

The bill would allow public officials like a county judge, mayor or governor to designate public safety answering points in their political subdivisions.

About 2.3 million calls a year go through the state's 911 centers, with nine out of 10 made on cellphones, according to state data. The current fee structure was set up to be supported by charges to land-line users.