Down syndrome curb on abortions advances 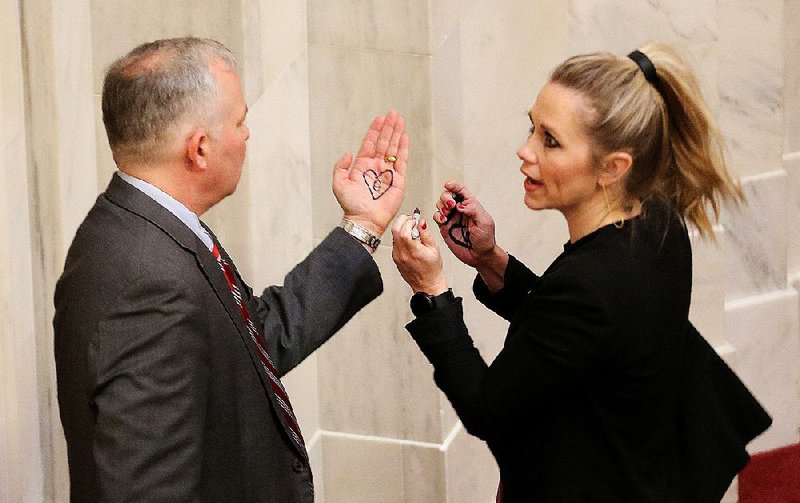 On Wednesday, Sen. Breanne Davis, R-Russellville, draws a heart on the hand of Lt. Gov. Tim Griffin in a show of support for people who have Down syndrome. The Senate adopted Davis’ resolution on World Down Syndrome Day. Senators also approved a bill banning abortions of fetuses with the genetic disorder. More photos at arkansasonline.com/321genassembly/

On the eve of World Down Syndrome Day, the Senate on Wednesday approved a bill that would prohibit abortions from being performed solely because the unborn child was diagnosed with the genetic disorder.

Without question or testimony, the Senate voted 29-2 to approve Senate Bill 2 -- sponsored by Sen. Trent Garner, R-El Dorado -- which would require a doctor to ask a woman seeking an abortion if she is aware of any test results, prenatal diagnosis or any other reason that the unborn child may have Down syndrome, a genetic disorder that causes developmental challenges and abnormal physical features.

Exceptions in the bill include if an abortion is necessary to "save the life or preserve the health of the unborn child or the pregnant woman," to remove a dead unborn child after a miscarriage or to remove an ectopic pregnancy. The bill also contains exceptions for cases of rape or incest.

If the woman answers yes to the questions, then the doctor must request the medical records relating directly to her entire pregnancy history.

A similar Ohio law was blocked by a federal judge earlier this year; that ruling is on appeal.

"I brought this bill because I wanted to make sure that those who have this diagnosis, those who could live this full and fulfilling life, those we see who for every single day bring joy not only to their families, but to members of their community and this state, have a chance to live," Garner said.

Davis stood before the group holding her 7-month-old daughter, who was born with Down syndrome.

"While receiving a prenatal Down syndrome diagnosis for my daughter, while it was one of the scariest things in my life, what Everly has shown our family over the last seven months is ...," Davis stopped as she choked back tears, "... that while she has Down syndrome, there is absolutely nothing down about it."

Garner pointed to Iceland as the "worst place in the world to be made with Down syndrome."

"Every single child with Down syndrome, nearly every single one of them, is aborted," Garner said.

About 4,000 babies were born in Iceland in 2017. By comparison, the U.S. -- with a population of about 325 million -- has about 4 million live births a year. Of that number, 6,000 babies are born with Down syndrome each year in the United States, according to the U.S. Centers for Disease Control and Prevention.

The World Health Organization estimates that the rate of babies born with Down syndrome is between one in 1,000 and one in 1,100 live births worldwide.

Rita Sklar, executive director of the American Civil Liberties Union of Arkansas, in an interview afterward, took exception with the mandate of SB2.

"The government does not need to be in the business of making these difficult, personal, private medical decisions for women and their families," she said.

"This is a very good bill that extends legal protection to some of the most vulnerable unborn children, those with Down syndrome," Cox said. "We are very pleased that Sen. Garner chose to introduce this bill and look forward to the day it becomes law."

Karen Musick, a board member for the Arkansas Coalition for Reproductive Justice, said SB2 does nothing to improve the lives of people living with Down syndrome.

"It's heartbreaking. This particular bill places a serious health and economic risk on the women in this state that's already suffering with some of the highest maternal death rates in the country," Musick said. "The bottom line is that pregnancy decisions, especially during high-risk pregnancies, shouldn't be made by politicians."

The bill was assigned to the House Public Health, Welfare and Labor Committee.