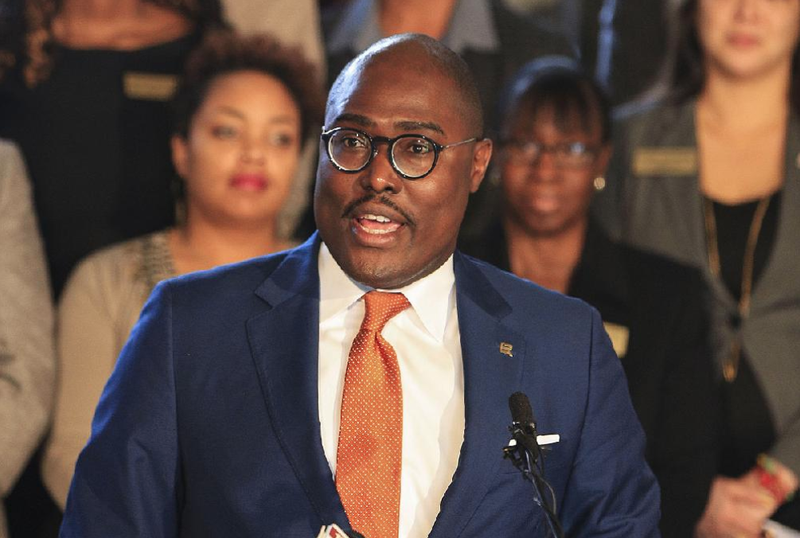 Little Rock Mayor Frank Scott Jr. said this week that he wants an ordinance to establish an independent citizen review board overseeing the Police Department on his desk Friday.

Scott called for such a board during his campaign and with added urgency Tuesday evening at City Hall, after more than an hour of emotional pleas for change and justice during the "citizen communication" portion of the city board meeting.

Twenty-one people spoke about the fatal February shooting of Bradley Blackshire by Little Rock police officer Charles Starks, expressing pain at the loss of their family member or fear of the police within their communities.

When the public comment period ended, the mayor said he had prayed with Blackshire's family after his death and continued to pray, but it was time to do more.

"We have to do more than just saying the same prayers; we have to move toward action," Scott said, to applause from a packed boardroom. He then told City Attorney Tom Carpenter that he wanted an ordinance by Friday to take before the city board for a vote.

The shooting took place Feb. 22, when Starks approached the car Blackshire was driving, which had been reported stolen, in a parking lot near West 12th Street and Kanis Road. According to dashboard-camera video of the incident released on March 7, Blackshire did not comply with Starks' commands to exit the vehicle.

Instead, the car rolled forward and grazed Starks' hip, the footage shows. Starks fired at least three times, then stepped in front of the moving car and shot about 12 more times from atop the car's hood, according to the video. Blackshire died at the scene, and Starks was relieved of duty three days after the shooting. The criminal investigative file has been sent to Prosecuting Attorney Larry Jegley's office.

Carpenter, who was tasked with writing the review board ordinance, said Wednesday that he had done extensive research but had not yet completed a draft. He said he had known Scott had wanted to set up a review board since before he took office on Jan. 1.

Little Rock Police Department spokesman Michael Ford said the department had not yet been officially notified or consulted about a review board ordinance.

The city has a civil service commission, which is made up of seven residents who are responsible for overseeing personnel disputes, promotions and regulation or policy violations involving the Little Rock fire and police departments. In recent months, many commission meetings have focused on hearing officers contest their suspensions or other disciplinary actions.

A spokesman for Scott said in an email that the mayor's office and the city attorney's office were finalizing details for the board, but did not answer questions about what the makeup and parameters of the board would be or how it would coexist with the civil service commission.

On Tuesday, Scott said from the dais that the review board would deal with police misconduct and brutality. He has previously said he wants to set up a "police accountability task force" in addition to the review board.

Typically, a citizen review board is made up of volunteers who review cases and offer suggestions to police leadership, Trisha Rhodes, an assistant professor of criminology and criminal justice at the University of Arkansas at Little Rock, said in an email.

Rhodes said it was rare that such boards can force a police department to make a certain decision, but they can provide some external oversight, represent some citizen concerns, follow up throughout investigations and use leverage to advocate for change.

She noted that some boards are made up of residents who are not necessarily trained in policing or fully representative of all community members, adding that often people who serve on review boards are typically "white, older adults who have the time to volunteer, so they may not fully represent the concerns of citizens in all areas of the city."

Dawn Jeffrey, director of community relations for local civil-rights community organization Seeds of Liberation, said she would support the establishment of a review board but hoped the mayor and city directors would appoint "actual community members that may not fit into their world."

"Are you actually putting people who can relate and be unbiased but actually know these communities?" she said.

Some city directors who communicated with an Arkansas Democrat-Gazette reporter on Wednesday said they would need more details about a review board to decide whether they would vote for it.

"I need to see the specifics. There are many types of citizen review boards, and while I'd probably be inclined to support, I couldn't comment until I saw the specifics," Ward 3 City Director Kathy Webb said in a text message.

Capi Peck, who represents Ward 4, said she would be supportive but thought any decision needed to be made in a thoughtful manner.

Ward 2 City Director Ken Richardson said he believed a citizen review board could be one way to help a fractured relationship between some residents and police, but he said that if established, it should not just be symbolic. Setting up a panel without any influence would be like "putting a Band-Aid on a gunshot wound" and possibly make things worse, he said.

The earliest the board could vote on such an ordinance would be at its next regular meeting on April 2.