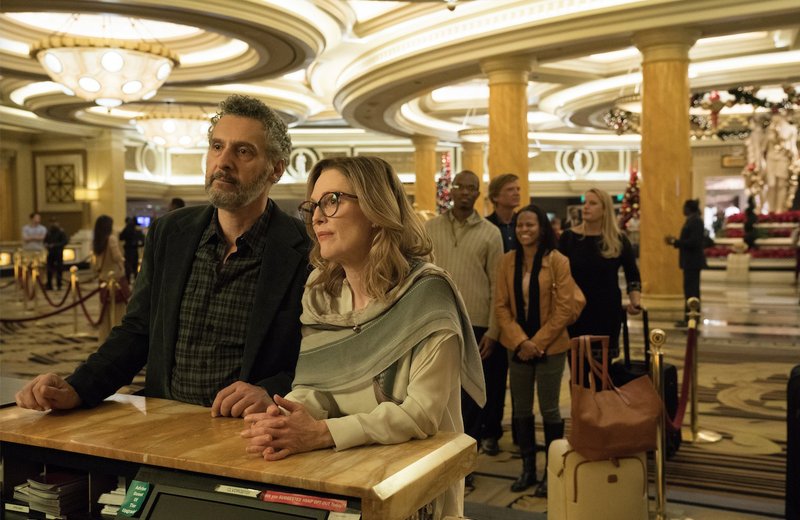 While it’s not unusual for Hollywood to remake foreign language films, it’s not often that the original director does the remake. But I don’t know of an instance where the second chance has resulted in a better film.

Austrian filmmaker Michael Haneke remade his ultra-violent 1997 home invasion thriller Funny Games shot for shot with an English-speaking cast and mostly American crew in 2007, but both movies are more shocking than interesting. (To be fair, Haneke has argued that the pointlessness of the films’ violence is the point.)

He did better than the late Dutch filmmaker George Sluizer who, in 1993, remade his remarkably plausible horror movie Spoorloos (1988) as the completely ordinary Hollywood product The Vanishing.

Rating: R, for sexuality, nudity, language and some drug use

Chilean director Sebastian Lelio’s Gloria Bell is an exception to this rule — it’s a faithful, nearly shot-by-shot remake of his 2013 drama Gloria. The two films land slightly differently, and which you prefer depends on whether you favor the melancholy phrasing of Argentine Paulina Garcia’s take on the title character in the original or Julianne Moore’s more vividly uplifting cover version.

Both are great, and maybe its just recency bias that works in Moore’s favor but like Bob Dylan once said of Gregory Peck, I’d see her in anything. While I can’t think of an actor whose name in the credits serves as a virtual guarantee of a film’s quality, Moore comes close.

She’s absolutely fascinating, if not quite credible, as the striving late-50s divorcee at the heart of this bittersweet comedy of contemporary manners. Gloria Bell (it was “Cumplido” in the 2013 film) lives a life of seemingly unquiet desperation, escaping from her headset-tethered job and atomizing family to throw herself into a Los Angeles dance club scene populated by aging members of the disco generation. (Talkin’ ’bout my g-g-g-eneration.)

Whether or not such places — where middle-aged men and women in business casual congregate to dance the night away and maybe take each other home — actually exist is beyond the scope of this inquiry. They do in the universe of this particular movie, where we are also expected to believe that Moore can be transformed into something mousy through the wearing of oversize eyeglasses. (She cannot; she is still luminous, and we would stand on Gloria Allred’s coffee table in our cowboy boots and say that.)

There is a real joy available in scenes of Gloria driving, singing along as her car stereo blasts Olivia Newton-John’s “A Little More Love,” Air Supply and Earth, Wind & Fire. Her Los Angeles is a Xanadu of yellow pastel and saturated neon, realized by cinematographer Natasha Braier.

But just because Gloria looks like Julianne Moore with kicky specs and is willing to sing full-throatedly off-key doesn’t mean her life is easy. For one thing, her son is Michael Cera, who in real life is intelligent and sweet but here plays a Cera-esque character whose wife has absconded, leaving him in care of their months-old baby.

She has a yoga instructor daughter (Caren Pistorius) in love with a globe-trotting surfer. At her insurance-related job, she offers comfort and support to the unlucky strangers she encounters through her headset and her co-workers. Gloria is a giver — and it takes a while before we realize her smile is actually brave.

Her neighbor’s Sphynx cat must sense this — he (she/it) shelters in her apartment while the pet owner undergoes a psychic break, cursing and shouting and keeping Gloria awake. She calls the landlord — the young man’s mother — on the phone to delicately inform her of the impending breakdown, and you start to understand exactly how provisional her own life is; surely Gloria never thought she’d be facing 60, living alone in rented rooms with some poor freaky hairless critter?

Then, she meets a man: Arnold (John Turturro), creased and dignified, with salt-and-pepper hair, a former Marine, a successful entrepreneur, a divorcee of more recent vintage than herself — and not too good to be true.

He’s still very much involved with the lives of his adult daughters and ex-wife, who seem to call him at all hours about problems they ought to be able to handle on their own.

Maybe it speaks to his goodness that Arnold doesn’t turn off his phone and ignore their petitions for his attention.

Arnold meets her family, including Gloria’s ex-husband (Brad Garrett) with whom she remains on friendly terms, and his new girlfriend (Jeanne Tripplehorn). Arnold receives the easy rapport Gloria has with her family painfully. He hasn’t told his daughters that he’s dating again, for fear they’ll “make fun” of him.

As competent and confident as he seems in the business world, Arnold is sensitive. He’s complex, a man of contradictions, deeply interesting to her. We start to wonder: Who is rescuing whom?

They fly off to Las Vegas together, to get away from Arnold’s troubles.

To say more would risk undercutting the genuine surprise available to someone who hasn’t seen Gloria. It’s enough to say that the third act is remarkably satisfying.

There are reasons for this beyond the arc of the story — it’s famously hard for women of a certain age working in Hollywood to come by roles of genuine weight and complexity (although Moore has certainly had her share).

It’s also relatively rare for a movie to seriously contemplate the dynamics of late middle age, when divorce and death have reshuffled the lives of people who might have thought themselves settled.

Gloria Bell is an understated, beautifully observed portrait of a woman on the verge of a well-earned takedown.