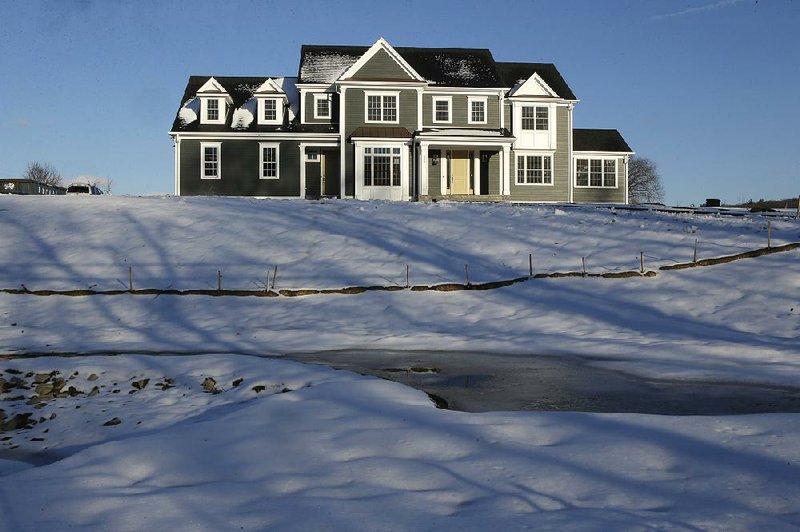 Long-term mortgage rates have continued their fall this week, creating incentive for sales of homes like this one surrounded by snow last month in Natick, Mass.

According to the latest data released Thursday by Freddie Mac, the 30-year fixed-rate average slipped to 4.28 percent with an average 0.4 point. It was 4.31 percent a week ago and 4.45 percent a year ago.

Points are fees paid to a lender equal to 1 percent of the loan amount.

"Mortgage rates fell this week and have yet to account for yesterday's Fed's announcement," said Danielle Hale, chief economist for Realtor.com. "Looking ahead to next week, we could see rates fall even further based on the decision to hold rates steady combined with guidance that emphasized patience."

The Federal Reserve did not increase its benchmark rate Wednesday and signaled it would not raise rates this year, a sign the central bank is concerned about a slowing economy. The Fed kept the rate -- which can influence mortgage loans as well as credit cards, home-equity lines of credit and more -- in a range of 2.25 percent to 2.5 percent.

The Fed's retreat comes during a slowdown in Europe and China, the uncertain status of the United Kingdom's withdrawal from the European Union and indications of lower spending by U.S. consumers and businesses. The Fed does not set mortgage rates, but its decisions influence them.

The news caused bond yields to stumble but came too late to be factored into Freddie Mac's survey. The federally chartered mortgage investor aggregates rates from 125 lenders from across the country to come up with national average mortgage rates. With investors seeking the safety of long-term assets such as bonds, the yield on the 10-year Treasury note fell to 2.54 percent, its lowest level of the year.

"After a quiet start to a week that was light on market-moving economic data releases and geopolitical developments, bond yields moved sharply downward after the Fed signaled that additional hikes to its benchmark rate were unlikely to occur this year and that it will stop the reduction of its balance sheet in the fall," said Matthew Speakman, Zillow economic analyst. "These developments almost certainly mean mortgage rates will be moving even lower in the coming days after remaining in a narrow range and hovering around 14-month lows for most of the past couple of months."

Hale and Speakman aren't the only ones predicting rates will continue to drop. Bankrate.com, which puts out a weekly mortgage rate trend index, found that three-quarters of the experts it surveyed say rates will go down in the coming week. Logan Mohtashami, senior loan officer at AMC Lending Group, is predicting lower rates.

"Even though we have had no bond volatility whatsoever recently and oil prices are above 60 today, a pullback in stocks could drive yields lower if the stock market feels the China trade deal might take longer," Mohtashami said.

Meanwhile, mortgage applications were higher this week, according to the latest data from the Mortgage Bankers Association. The market composite index -- a measure of total loan application volume -- increased 1.6 percent from a week earlier. The refinance index climbed 4 percent from the previous week, while the purchase index ticked up 0.3 percent.

The refinance share of mortgage activity accounted for 39.2 percent of all applications.

To calculate average mortgage rates, Freddie Mac surveys lenders across the country between Monday and Wednesday each week.

Information for this article was contributed Kathy Orton of The Washington Post and by The Associated Press.