State rethinks pick of firm to operate its juvenile lockups 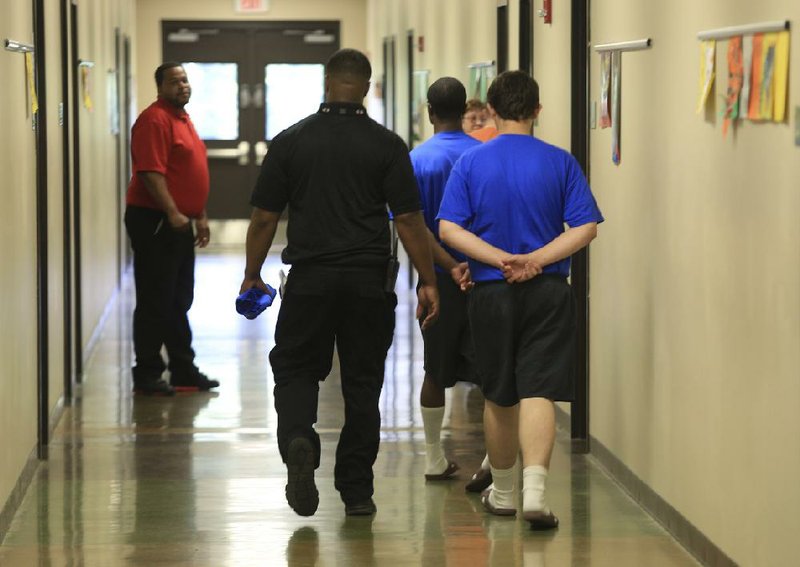 Now, the Arkansas Youth Services Division plans to award the contract to the only other company that vied for the contract last month, Youth Opportunity Investments LLC of Carmel, Ind.

The contract was initially to go to Rite of Passage, which already manages Arkansas' largest youth lockup in Alexander, but Youth Opportunity challenged the state's decision last week.

In its protest letter, Youth Opportunity said Rite of Passage failed to disclose to Arkansas officials that Colorado had terminated the Nevada company's contract to operate a facility in Durango last year.

Rite of Passage exposed children to unsafe conditions and abusive guards, which prompted Colorado to break its contract with the company, according to the protest letter and Colorado records.

"Youth Opportunity Investments has nothing to say at this time," Gary Sallee, an Indianapolis attorney representing the company, said Thursday. "Its protest letter speaks for itself."

The Arkansas youth prisons in Dermott, Harrisburg, Lewisville and Mansfield have been operated by the state since January 2017, after Gov. Asa Hutchinson broke a stalemate over the awarding of a previous contract.

Hutchinson and other state officials have said that returning the youth prisons to private control by July is key to a planned overhaul of Arkansas' juvenile justice system.

Arkansas' juvenile lockups were under federal oversight from 2003-12 after authorities found civil-rights violations, child abuse, neglect, unsafe living conditions, and inadequate educational and mental-health services. Watchdog groups have issued reports and letters, as recently as 2017, that show some of those conditions persist.

On Thursday, Michael Cantrell, Rite of Passage's executive director, said the company "won this contract based on the merits of our proposal" and is "exploring all procedural and legal options."

"We will have more to say in the coming days," Cantrell added.

Rite of Passage has been running the 120-bed Arkansas Juvenile Assessment and Treatment Center since 2016 under a $34.1 million, three-year contract.

It also invested its own money in the Alexander lockup, passed its latest Arkansas audit and decreased acts of violence occurring at the facility, Terry Benham, a Little Rock consultant representing the company, told the Arkansas Democrat-Gazette last week.

According to procurement records, Rite of Passage earned an average score of 570 -- above Youth Opportunity's 534 -- on its proposal to run the other five lockups.

Right of Passage had higher marks in the categories of education, safety and "general information," which weighs a provider's experience working in juvenile justice. Its proposal contained a $235 daily bed rate, $1 lower than Youth Opportunity's.

But the Arkansas Office of State Procurement ultimately agreed with Youth Opportunity, according to a determination letter released Thursday.

Edward Armstrong, procurement office director, wrote that Rite of Passage was disqualified from winning the bid because of Colorado's decision to cancel its contracts with the company.

The request for proposal to run the sites in Harrisburg, Mansfield, Lewisville and Dermott, had required that the provider have a clean contract history, meaning no terminations because of "nonperformance" in the past five years.

He cited Colorado records that showed how Rite of Passage was subject to "immediate termination" because the "health, safety, or welfare of persons receiving services may be in jeopardy."

Scott Hardin, spokesman for the state Department of Finance and Administration, which oversees the procurement office, said that Rite of Passage "has no administrative recourse" and that the state's "decision is final."

"The only option would be via circuit court, although that's not common," Hardin explained. "Historically, it's unsuccessful."

News reports in Colorado last year revealed how the Rite of Passage's Durango juvenile jail staff members improperly restrained child inmates several times over the span of a few weeks. Staff members lied to officials about how guards responded to child inmates and failed to seek immediate medical attention for a child after a use-of-force incident, reporters found.

Colorado officials shut down that facility in August.

Hutchinson said Thursday that the Youth Services Division's decision to go with the new company wouldn't delay promised changes to the juvenile-justice system. In November, Hutchinson vowed to reduce youth incarceration, and to improve the level of treatment and rehabilitation for jailed young offenders.

Before the state took over the lockups in January 2017, the Youth Services Division had paid two Arkansas nonprofits $145 a day per child to manage the sites, for more than a decade.

In 2016, the Department of Human Services, which oversees the division, issued a request for proposal to manage the sites. Both nonprofits submitted bids, but officials picked Youth Opportunity's proposal.

Lawmakers, however, refused to approve that contract, and Hutchinson handed control of the facilities over to the department.