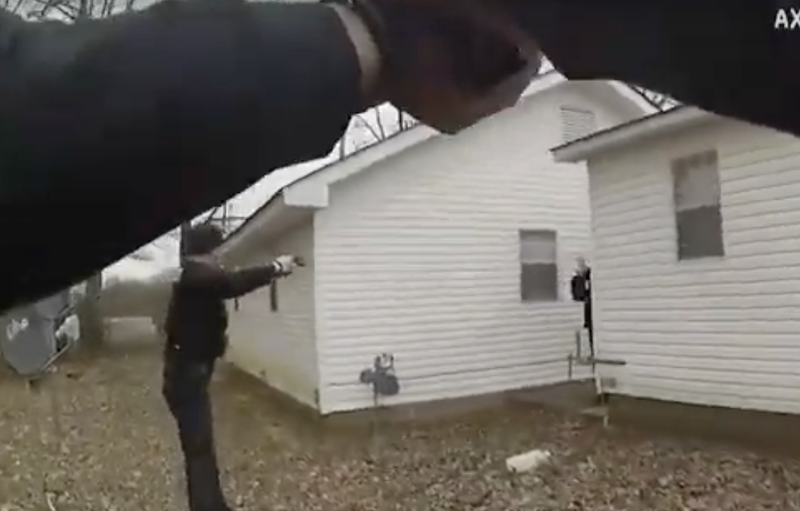 Body camera footage of a deadly police shooting in northeast Arkansas shows two officers shoot a man suspected in a recent homicide, with the footage released Friday capturing the man holding a gun near his side before he’s shot.

The Jonesboro Police Department said officers Brian Bailey and Chris Jefferson encountered 47-year-old Rodney Fisher on March 7 in a breezeway of an apartment building in the 2700 block of Curtview Street.

Body camera video captured a brief standoff as Bailey and Jefferson approach Fisher. Footage shows both officers draw their guns after Fisher pulls out what appears to be a handgun, holding it at his side as the officers yell “drop it!” and “I swear to God, drop the (expletive) gun!”

The officers fire three shots between them, roughly 10 seconds after Fisher appears on screen. He goes to the ground, dropping his gun and officers handcuff him.

The footage shows Fisher writhing in pain on the ground, telling officers not to touch him as they apply tourniquets before an ambulance arrives.

Officials said Fisher later died at a local hospital after being shot in the chest and leg.

Bailey and Jefferson have been with the department for seven and eight years, respectively, according to police records. They were assigned to the city’s street crimes unit and were investigating a drug complaint before encountering Fisher.

The 2nd Judicial District prosecutor on Tuesday cleared the officers in their use of deadly force following a state investigation.

"Fisher had made threats against law enforcement officers," wrote prosecutor Scott Ellington, after declining to file any criminal charges. "They were told that Fisher had said that he would not go back to prison because he would not be taken alive."

Authorities suspected Fisher in the killing of 44-year-old David Marshall, who police found with apparent gunshot wounds at his Jonesboro apartment on Feb. 25, authorities have said.

Marshall’s roommate, Nichole Herndon, was reported missing since then.

Police investigating Marshall's death found that Herndon was in the apartment and that Fisher held her against her will for more than a week, authorities said.

Officers found her the day they confronted Fisher, who had a warrant for his arrest on a first-degree murder charge in connection to Marshall’s killing, police said.

Bailey and Jefferson were put on paid administrative leave pending the outcome of the investigation as well as an internal review.

A Jonesboro police spokeswoman said they remained on leave Friday but were expected to return to their regular duties sometime next week.