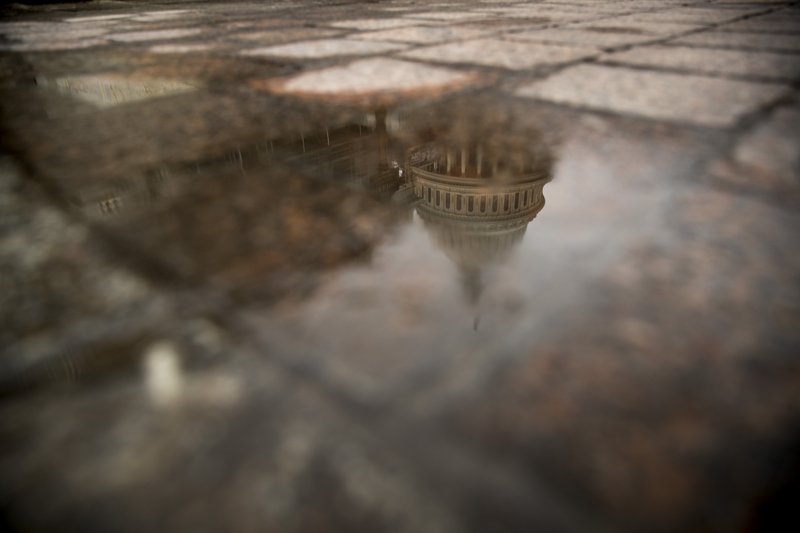 FILE- In this Feb. 22, 2019, file photo the dome of the U.S. Capitol Building is visible in reflection in Washington. On Friday, March 22, the Treasury Department releases federal budget data for February. (AP Photo/Andrew Harnik, File)

WASHINGTON -- The federal government posted a record budget deficit for the month of February, pushing the overall deficit for the first five months of the budget year up 39 percent compared to the same period a year ago.

In its monthly report on receipts and outlays released Friday, the U.S. Treasury Department said the deficit hit an all-time high for February of $234 billion.

That surpasses the old February deficit record of $232 billion set in 2012, the last year the deficit for the year topped $1 trillion.

For the first five months of the current budget year, fiscal 2019 which began on Oct. 1, the deficit totaled $544.2 billion, up from a deficit of $391 billion over the same period in the previous budget year.

In its new budget sent to Congress last week, President Donald Trump's administration is projecting that this year's deficit will total $1.09 trillion and will remain above $1 trillion for the next four years.

The administration's 2019 budget deficit forecast would represent a 40 percent increase from last year's deficit of $779 billion.

According to the forecast, this year's deficit will be the largest imbalance since the government had a $1.1 trillion deficit in 2012.

That was the fourth straight year of trillion-dollar deficits during a period when President Barack Obama's administration had boosted spending to grapple with the 2008 financial crisis and lift the country out of the deepest recession since the 1930s.

Accumulating deficits add to the overall federal debt, which totaled more than $22.03 trillion as of Thursday.

That figure includes more than $5.6 trillion the government owes itself, including about $2.8 trillion borrowed from the Social Security Trust Fund, according to Treasury Department reports.

The budget deficit as a share of gross domestic product is expected to widen to 5.1 percent this year, up from 3.8 percent a year ago, according to projections from the White House Office of Management and Budget.

The shortfall is expected to be 4.9 percent of GDP in 2020, and further narrow every year through 2024, according to the estimates.

In the current budget year, receipts from October through February dipped less than 1 percent to $1.3 trillion compared to the previous year, while spending accelerated 9 percent to $1.8 trillion.

They also cite billions of dollars in increased spending on the military and domestic programs that Congress approved last year.

So far in fiscal 2019, withheld taxes for individuals and Social Security taxes are down 1 percent.

The 2017 tax law slashed the corporate tax rate from 35 percent to 21 percent.

Corporations have so far this fiscal year paid $59.2 billion, compared to $73.5 billion at this point in 2018, when the tax law was only partially in effect for some corporations.

In 2017, the year before the law was enacted, corporations had paid $87.4 billion at this point in the year.

In a briefing with reporters on Friday before Treasury released the budget data, officials attributed the drop in corporate tax revenues to the front-loading of accelerated expensing and other such items, and reiterated the administration's view that the cuts would pay off with faster economic growth.

The officials said the administration has been clear the tax cuts would pay for themselves over time, not immediately.

"It's not an accident that this economy is doing so well, it comes in no small part from business tax" reductions, economist Stephen Moore, Trump's pick to be a Fed governor, said Friday in an interview on Bloomberg TV.

"We've just got to get the spending" under control but no party is in the mood for that, he added.

Information for this report was contributed by Martin Crutsinger of The Associated Press; and Katia Dmitrieva, Laura Davison and Saleha Mohsin of Bloomberg News. 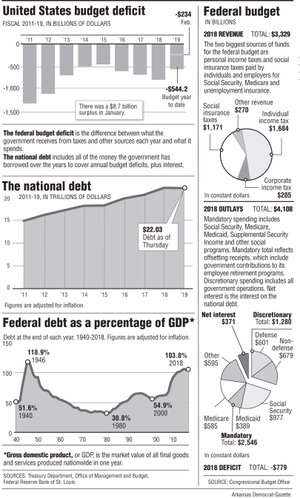