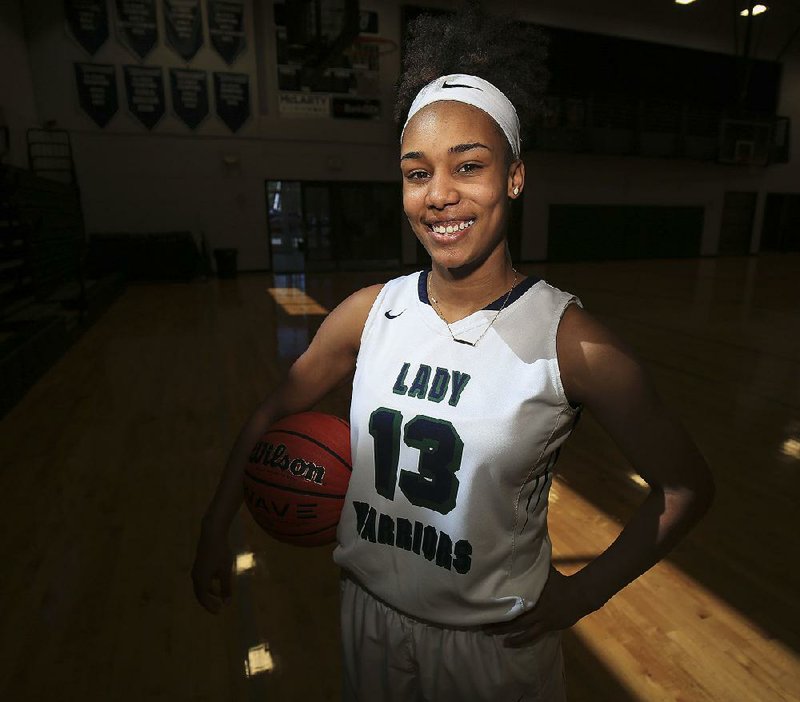 Reagan Bradley has a hard time saying "no," especially when it comes to footwear.

"I love shoes and I go shopping a lot," Bradley said. "I probably own 50 pairs. I don't wear wear all of them. There's just too many."

Bradley's love of sneakers almost rivals her love of basketball. Armed with a pleasant smile and with a penchant for precise passing, Bradley led the Little Rock Christian Lady Warriors to the program's first state championship earlier this month.

The 5-8 senior point guard scored when she had to -- going for 34 points in a Class 5A state quarterfinal victory over Nettleton -- but she was just as effective when called upon to play defense or hand out assists.

"She's not flashy," Little Rock Christian Coach Ronald Rogers said. "She can be if she wants, but in my opinion, she plays the game the right way. She plays hard every possession."

After leading her team to a 29-2 record and earning state tournament MVP honors, Bradley has been selected as the Arkansas Democrat-Gazette All-Arkansas Preps Girls Basketball Player of the Year for 2019.

"She is such a great player," Russellville Coach Sherry White said. "She didn't hurt us with her scoring, but her defense, her passing, her rebounding, she does it all so well."

Bradley scored only 10 points in the Class 5A state championship game, but her accurate passing spurred the Lady Warriors' offense. She handed out five assists in the title game, including a behind the back bounce pass that led to an eight-foot open jumper for sophomore Wynter Rogers.

"She's always had the vision to be able to pass the ball," Coach Rogers said. "Sometimes she makes passes and you go 'How did that get there?' "

In his first year at Little Rock Christian, Coach Rogers noticed Bradley playing for the school's junior high team and knew he had his point guard for the next four years. Bradley started all 118 games of her high school career.

"It was in their tournament and it was the prime time game," Bradley said. "I was standing for the national anthem and coach said, 'Don't let the bright lights get to you.' It was my first game in a crazy environment and I let the bright lights get to me. But I think that was the best thing that ever happened to me. Now when I play in front of big crowds, I know I've got to keep a level head."

"She loved the big games and with the game on the line you wanted the ball in her hands," Coach Rogers said. "Either she would get a good shot for herself or she would create a good shot for a teammate. That's what she's so special at."

While managing competitive games became a successful endeavor for Bradley, the recruiting process was not as easy.

"Reagan is a pleaser. She wants to make everybody happy," Coach Rogers said. "We went to Reagan and said 'You're going to have to tell somebody "no." ' I think that was real hard for her."

"It was exciting to know that there were schools wanting you to come play basketball for them for four years," Bradley said. "But when it came down to narrowing down schools, it was tough. I had to make a checklist of all of priorities. SMU checked off all of my boxes."