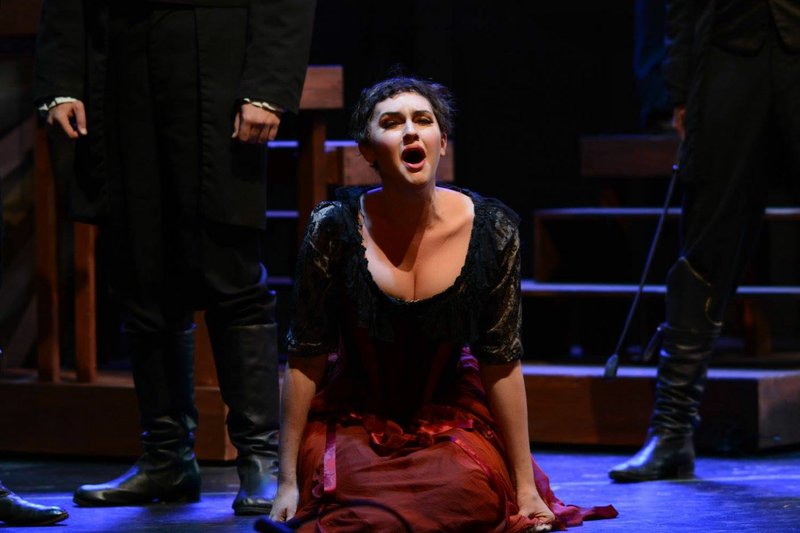 Photo courtesy Margaret Newcomb Internationally known mezzo-soprano Margaret Newcomb is traveling from her current home in Vienna to portray Eliza in the Opera Fayetteville production of "Dark Sisters," a contemporary opera by Nico Muhly. Musical theater was Newcomb's first love, and here, she is pictured as Fantine in "Les Miserables."

"Dark Sisters," selected by Opera Fayetteville for its eighth season, can be as deep as audiences wish to delve.

Musical theater fans may simply enjoy the Arkansas premiere of the contemporary work by Nico Muhly. Critics say the American composer draws on "Copland's Americana, strands of Minimalism [and] Meredith Monk tinged with Giacinto Scelsi's modernism. But he has a keen ear and has handled the challenge of finding his own voice." And they praise Muhly's "instrumental writing [as] impressive" and his arpeggios as audacious.

WHERE — Starr Theatre at the Walton Arts Center in Fayetteville

The libretto by Stephen Karam, whose play "The Humans" was staged at TheatreSquared in January 2018, is the second layer, credited for the opera's "poignant characters, especially Eliza." And beyond that, says Opera Fayetteville founder Tamara Ryan, there are questions about women's ownership of their own bodies and the separation of children from their families that she had no idea would resonate so loudly in the spring of 2019.

"I fell in love with the music," she says. "But it has turned out to be more timely than I expected."

"Dark Sisters," which premiered in 2011, centers on Eliza, one of five wives of a charismatic leader called "The Prophet."

"Even though her background is very different from most people who will see the show, there's something deeply relatable about Eliza's struggle," Ryan says. "She's stuck between how she's been taught to live and a sense that there's something more for her out there. She's struggling with how a loving God could allow such painful things to happen to her. Those are experiences that resonate with most of us, I think."

Internationally known mezzo-soprano Margaret Newcomb is traveling from her current home in Vienna to portray Eliza.

"She is so strong and courageous," Newcomb says. "She risks everything to stand up against a system she knows is wrong. In her situation, I don't know if I would be able to do what she does. She fights back when nobody else stands with her and ends up losing the very thing she fought to save in the first place."

Newcomb, raised in a musical family in Allentown, Pa. -- where grandma was a pianist, mom sang and dad played multiple instruments -- found her first love in theater.

"As a kid, I always wanted to be on Broadway," she remembers. "My voice teacher started assigning me some opera arias and scenes during high school, and I realized I really loved it, and it suited my voice.

"The first opera my parents took us to see at the Met was 'La Boheme'," she adds. "It's still my favorite!"

She's living in Vienna, she says, because "there are a lot of opportunities for opera singers in Germany and Austria. I got my first European gig singing chorus with the Wiener Staatsoper as part of the Salzburg Festival. It's a really cool opportunity and helped me get a visa. So that's why I'm based here for now. It also allows me the freedom to audition and take other engagements, so right after this I'm actually making my solo European debut in Kiel, Germany, in 'Die Walküre'."

But Newcomb had heard about Opera Fayetteville, even on the other side of the world. "It's a great company with lovely people that I really wanted to work with."

"We're thrilled to bring incredible artists from all over the country as well as work with the amazing local arts community to create something really special in Fayetteville," says Cris Frisco, conductor and music director. And "while we love the classics, we're committed to creating a home and an audience for challenging contemporary opera in Arkansas."

"I think all contemporary music has its challenges," says Newcomb. "The tunes are not familiar, and the notes and rhythms can be quite tricky. But as far as new opera goes, this one is very tonal, beautiful and singable. Nico Muhly does a great job writing for the voice."