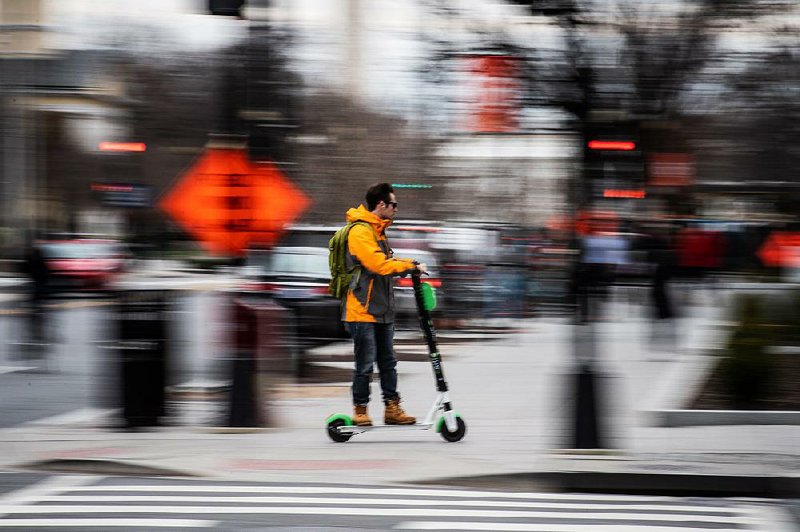 A helmetless electric scooter rider zips along a street in Washington, D.C. The devices are in dozens of cities across the United States, including Little Rock, and have spawned a new category of emergency room injuries.

The Centers for Disease Control and Prevention is investigating the spike in injuries related to the use of electric scooters. The devices, the latest fad in transportation, have become ubiquitous on American streets and sidewalks.

The CDC is working in collaboration with the Austin Public Health Department in "developing and evaluating methods to find and count the number of injuries related to dockless electric scooters," a CDC spokesman said.

The investigation, the first from the CDC into scootermania injuries, is being carried out as reports spread of injuries and deaths related to scooters in cities from Washington to Los Angeles and Dallas; it also follows recent news of scooter failures and breakdowns.

The devices, which became wildly popular soon after entering U.S. markets a year ago, are now in dozens of cities nationwide, including Little Rock, and have led to a new category of injuries in emergency rooms. Cases of broken noses, wrists and shoulders, along with facial lacerations and fractures, have been reported since last summer.

Some employees from the Little Rock city attorney's office will attend a seminar this spring that will include a program dealing with scooter safety.

The city is in the middle of a six-month pilot program with scooter company Lime. The agreement ends May 15, per a memorandum of understanding arranged by thenformer Mayor Mark Stodola.

In January, a letter to the chief executive officer of Neutron Holdings Inc., which operates Lime, stated that Little Rock would "forgo the pursuit of a superseding contract."

"The City has been disappointed in Lime's lack of attention to the safety of its riders and pedestrians," read the letter, signed by City Attorney Tom Carpenter.

The next day, Little Rock Mayor Frank Scott Jr. said on Twitter that he planned to issue a request for qualifications inviting alternative transportation companies to submit proposals in order to find the best fit for Arkansas' capital city. In an interview, he noted that the city had received "numerous complaints."

Stephanie Jackson, communications director for the mayor's office, said Friday that a request for qualifications had not yet been issued, but the intent was still to seek a scooter provider.

"This is kind of like a disease outbreak investigation, the disease in this case being injuries associated with dockless electric scooters," said Jeff Taylor, manager of the Epidemiology and Disease Surveillance Unit with Austin Public Health, who is overseeing the study with the CDC.

"As we were seeing more scooters, we were hearing more and more from emergency medical services about accidents and injuries," he said. "We were also hearing from hospitals about injuries. Ultimately we are doing the study to better understand how we can prevent the injuries from happening."

The CDC and the Austin health officials are examining severe injuries that occurred in Austin, Texas, in a 2-month period last fall, interviewing hundreds of injured riders and analyzing medical charts.

Scooter companies Bird, Spin and Lime say they support the CDC study. The companies have said safety is a top priority and they encourage users to take precautions such as not wearing headphones or carrying anything in their hands while riding.

Bird, Lime and Skip have basic safety information on their apps and labels on their scooters, as well as training instructions. Bird requires users to upload a driver's license to confirm they are at least 18 years old. Some of the companies say they provide free helmets.

"Safety needs to be more than a priority for scooter companies. It needs to be the underpinning of the entire program," Spin said in a statement. "We are working diligently to formalize rigorous operational procedures, fortify our hardware, enforce rules around usage and parking, and educate the public on safe riding and driving behavior.

"We plan to do all of this enforcement and education in close partnership with cities and universities, who must also do their part to ensure streets are well maintained and that vulnerable street users are protected from collision with cars and trucks."

Lime, one of the world's largest scooter companies, last month urged riders to take precautions while operating its scooters, citing a technical "bug" that can cause "sudden excessive braking during use." Last year the company pulled scooters out of California after discovering that a number of them may have been carrying batteries with the potential to catch fire.

"At Lime, the safety of our riders and the community is our number one priority," Lime said in a statement. "We appreciate the CDC's leadership on this very important issue, and we look forward to working with the industry, medical community and regulators to create a meaningful ecosystem for this new and evolving technology."

Paul Steely White, director of safety policy and advocacy at Bird, said the company is encouraged that the CDC is examining the growing impact of e-scooters on mobility within cities.

"Data from tens of millions of shared e-scooter rides indicate that e-scooters and bicycles have similar risks and vulnerabilities," he said. "Bird continues, along with our Global Safety Advisory Board, to advance policies that enhance the safety of those riding e-scooters and advocate for more protected bike lanes in our communities.

"It is beyond reproach that American cities must shift away from cars, and redesigning streets to protect those who choose bikes, e-scooters, and other micro-mobility options is what we need to keep our commuters safe."

So far, Taylor said, data show many perceptions about scooter injuries are just plain inaccurate, including that a leading cause of injury is collision with cars.

"There may have been a perception that accidents with other motor vehicles were a primary cause of the injuries, but I don't think we have found that. Some people say these accidents primarily occur at night when it's dark, but we didn't find that. They occur at all times of the day," Taylor said.

"Some people wonder whether people had been under the influence of alcohol and we are not going to find that."

The recommendations will also discourage pairs of riders on a single scooter, which he said leads to not only distractions, but also a lack of balance and more likelihood of a crash. He said it also would recommend women wearing heels switch to flats when riding.

The CDC provided four epidemiologist to assist in the data gathering and analysis of the Austin study of the "microbility vehicles."