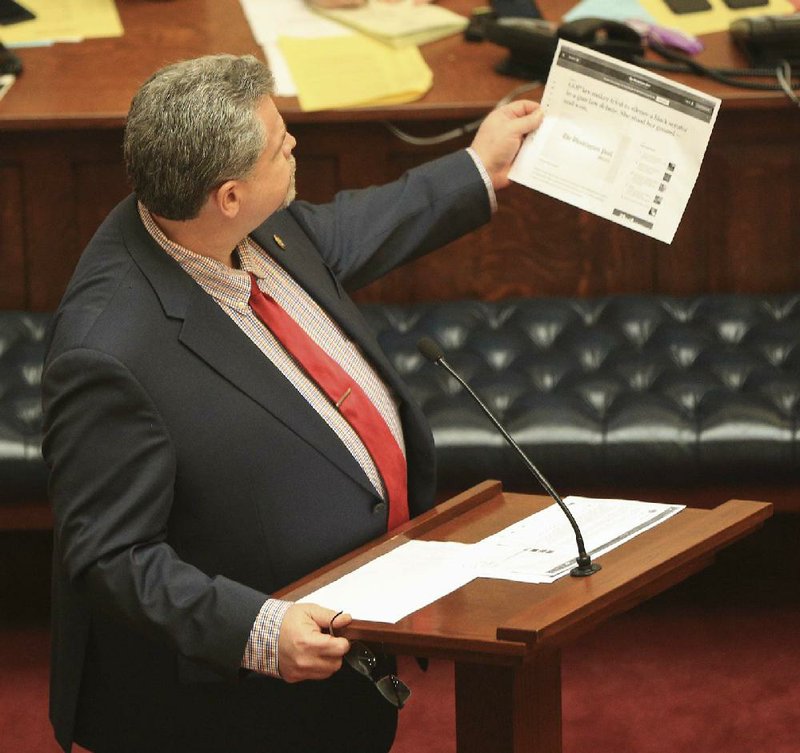 State lawmakers would be limited to 12 years in office under a proposed constitutional amendment that the Senate is scheduled to consider Monday.

Senate Joint Resolution 15, by Sen. Alan Clark, R-Lonsdale, cleared the Senate State Agencies and Governmental Affairs Committee last Tuesday. If approved by the Senate and then the House, the proposal would go on the November 2020 general election ballot. No action by the governor is required.

Under Amendment 94 to the Arkansas Constitution approved by voters in 2014, lawmakers are now limited to serving up to 16 years in the House or Senate or of combined service in both chambers. Senate terms are four years and House terms are two years. Senators who draw a two-year term after once-a-decade legislative redistricting are eligible to serve that term beyond the 16-year limit.

Under SJR15, state lawmakers elected after Jan. 1, 2021, would be limited to 12 consecutive years in the House, Senate or both. The two-year Senate term related to redistricting would be included in that total.

Also under the resolution, lawmakers now in office who serve 16 years (or 18 years because of Senate redistricting) would become eligible for subsequent service in the General Assembly but only once they are out of office for four years.

On March 14, the private Arkansas Term Limits ballot committee filed its own proposed constitutional amendment that would set the maximum at 10 years. That proposal is similar to the committee's last one that the Arkansas Supreme Court struck from the November 2018 ballot in October. To get its latest proposal on the 2020 ballot, the committee will have to collect more than 89,000 valid signatures of registered voters.

The latest Arkansas Term Limits' proposal would limit lawmakers to three two-year House terms; no more than two four-year terms as a senator; or any term that if served would exceed 10 years in the General Assembly. The two-year redistricting term in the Senate would be used in calculating the 10-year limit. Service in the General Assembly on or after Jan. 1, 1993, would be included in the calculation.

A 10-year term limit for Arkansas lawmakers would be the nation's strictest. California and Oklahoma limit lawmakers to 12 years.

Arkansas lawmakers can refer up to three proposed constitutional amendments to voters in the 2020 general election.

They've approved one so far, House Joint Resolution 1018, by Rep. Jeff Wardlaw, R-Hermitage, that would permanently extend the half-percent sales tax for highways. That tax was originally approved by voters in 2012 for a 10-year period.

Of SJR15, Clark told the Senate committee that his proposal was aimed at protecting good government in Arkansas.

"There is nowhere good government is more important than the people's branch, the Legislature," he said.

He said that about 5 percent of lawmakers return in states with term-limit provisions allowing legislators to return after temporarily sitting out.

"I don't think there is anything wrong with the 16 years [limit under Amendment 94]. But there has been talk ever since the ethics amendment [which was included in Amendment 94] that it was deceptive and I offered an amendment the very next session and have been ever since," he said.

The amendment also barred state lawmakers from accepting certain gifts, such as meals and drinks in one-on-one meetings, from lobbyists; prohibited direct corporate and union contributions to candidates; and extended the one-year waiting period to two years before former lawmakers can register as lobbyists for private clients.

Amendment 94 also created a citizens commission to set the salaries of state elected officials. The salaries were previously determined by the Legislature.

Clark said SJR15 "takes us to 12 years total, which is only two years longer than what Arkansas Term Limits had offered," and would allow lawmakers to gain experience to actually make a difference and get things done without becoming "career politicians."

"I would like to point out that there seems to be a little bit of a conflict with SJR15, which wants to use the same popular name, the Arkansas Term Limits Amendment. I don't know [how] that gets resolved. We've already filed ours. We have been using that popular name for about six years," Steele said.

"I think it is possible that some people might feel like this is an attempt to perhaps piggyback on any goodwill that our amendments have created over the last two years, perhaps may even confuse voters about what exactly ... this bill is, since we have been campaigning for six years on the Arkansas Term Limits Amendment," he said. "This looks like it might be an attempt to lead people to believe that this is the same one when, of course, it is not."

Steele suggested that lawmakers change the popular title in SJR15 so it is not the same as his group's proposal.

"It is no intentional desire of mine to have them confused because the amendment that was offered by Arkansas Term Limits, I thought, was awful," Clark said.

Limiting lawmakers to only 10 years would "make the people's branch weaker than it already is and to try to get anything done to reform government, which is the main thing I have worked on the six years I have been here, more than concerns me," he said.