WATCH YOUR LANGUAGE! Do words ever bug you a bit? 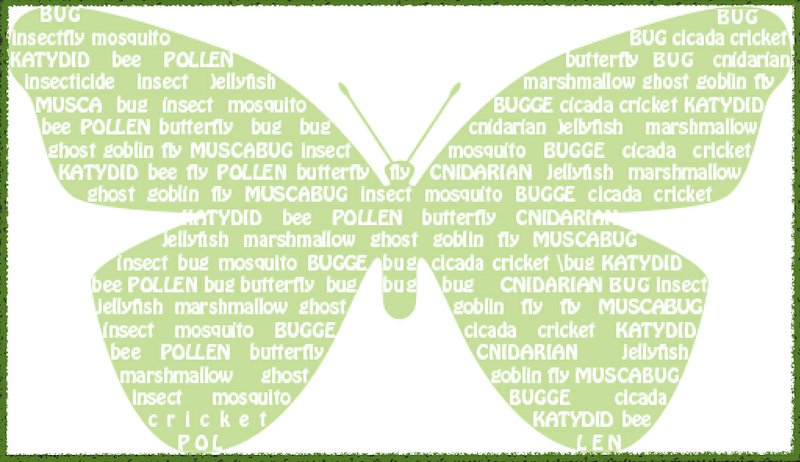 The weather's warming up, at long last. In the warmer months, you hear certain words more often, and a few of them involve insects.

An insect is that little creature that can ruin a day outside. Though, maybe for a toddler, an insect makes for a fascinating day. "Insect" comes from the Latin and Greek roots for "cut up," reflecting how the head, thorax and abdomen are segmented.

I usually just call them "bugs," a word with a less scientific origin. Word experts aren't positive about where it came from, but one guess is that it's from the Middle English word "bugge," for a scarecrow or something that's scary. It also may be from Scottish, Welsh and Irish words meaning "goblin," "ghost" and "supernatural being."

Wow, it sounds like insects freaked out people living a couple of centuries ago. Imagine how terrifying drones would have been to them.

Mosquito bites are a rite of summer, right?

The word "mosquito" comes from the diminutive form of "musca," the Latin word for "to fly." So mosquito just means "a little thing that flies."

That is so much whitewashing. Mosquitoes must have hired the best public relations firm in town.

One of my favorite words is "cicada." For much of my youth (a long, long time ago), I thought it was pronounced KICK-a-da. In fact, it's Si-CAY-da. The male cicada makes a loud sound by rubbing two parts of its abdomen together. Its Latin root means "tree cricket," but the word was believed to have originated from an unknown Mediterranean language.

For some reason, two other loud insects, the cricket and the katydid, simply received their names from the sounds they make. I thought the cricket must be the rock star of the group, because the English batting game is called "cricket" and Jiminy Cricket (against insect odds) reached stardom in the classic children's film Pinocchio.

But the game of cricket (a summer pastime) received its name from an old French word for a wooden stick, not from the insect.

Pollen is what makes some of us sneeze. Droplets of pollen hold the male reproductive cells of plants with seeds. It comes from the Latin word for "fine flour."

If you have allergies, you probably don't think of it as anything fine. Achoo.

Another summer annoyance — at least for the beachgoers: jellyfish.

Jellyfish do look like jelly. That makes sense. They're not fish, though. A jellyfish is a cnidarian, an aquatic creature that stings. The Greek root there is "cnidos," or stinging nettle.

I've already strayed from insects, so I'll keep going. I thought of marshmallows when an editor told me he had been camping and eating marshmallows.

It's hard to tell now, but a marshmallow, the sweet treat, was formerly made from the sap of an herb called mallow that grows near marshes.

Today's confections are not as herby. They're made mainly with sugar and gelatin.

A while back I bought a funny book titled I Judge You When You Use Poor Grammar.

Author Sharon Eliza Nichols gathered comical signs collected by a Facebook group with the same name as the book. The poor grammar, spelling and punctuation will make you laugh.

The sarcastic comments that Nichols adds will make you laugh more.

Some of the signs have apostrophes that shouldn't have been invited to the party:

Burger at it's best (That one's in neon. Proper grammar can be costly.)

Gifts for Dad's and Grads (Well, which is it?)

Many other signs have the apostrophe where it's not needed. Some of the signs have embarrassing spelling errors.

(On a window) Do Not Open. Glass will brake.

Driveway. No Parking Aloud (Keep your voice down!)

Some of the signs are simply horrible translations of English.

(At an airport) For Restrooms, Go back toward your behind.

Some of the signs defy categorizing.

Business,s open as usual (Yes, that's a comma where an e should be.)

Please pre-pay in advance after dark (So I can't pre-pay afterwards?)

You alone can protect the forest fire (That's a big responsibility.)

The buzzard is not working. It rings but the door does not open. (Got it.)

Also, if you know of other websites like this, please let me know. I love to laugh.

Source: I Judge You When You Use Poor Grammar, American Heritage Dictionary, Online Etymology Dictionary, Your Dictionary, Merriam-Webster, University of California Museum of Paleontology, Today I Found Out.

Print Headline: Do words ever bug you a bit?