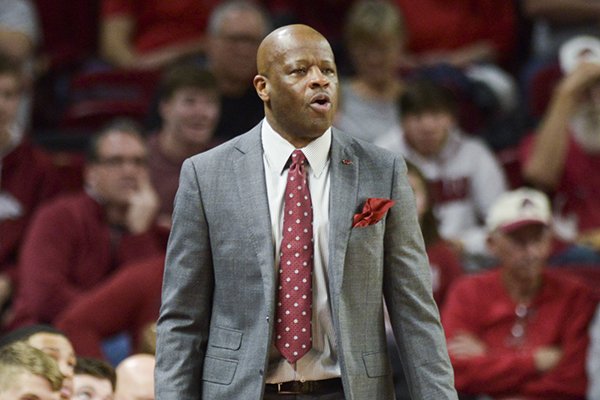 FAYETTEVILLE — Arkansas has fired basketball coach Mike Anderson following an 18-16 season in which the Razorbacks lost eight of their final 12 games.

Arkansas athletics director Hunter Yurachek announced the decision in a press release Tuesday. He said Melvin Watkins will be the program's interim head coach until a full-time replacement is found.

“After a review of the program, including an analysis of the past eight years and a look forward, I have made a decision that a change in leadership will best position our men’s basketball program for future success,” Yurachek said in a statement. “In the past eight seasons, we have won a number of games and have made appearances in both the NIT and the NCAA Tournaments. However, in my evaluation, we have not sustained a consistent level of success against the most competitive teams in the nation to enable us to compete for SEC and NCAA Championships on an annual basis. That will continue to be the benchmark for our success throughout our athletic program."

Do you agree with Arkansas' decision to fire Mike Anderson?

In a 59-second video posted to his Twitter account, a dejected-looking Anderson wore a Razorback polo shirt and responded to the firing.

"Razorback Nation, it’s been a challenging day," Anderson said. "When you have pride and passion about what you do, it’s hard to say goodbye. I’ve had the opportunity to be the head coach here for the last eight years, and it’s been a great experience. I want to thank Jeff Long, Dr. (David) Gearhart for bringing me back to be a head coach. I had a lot of great players to come our way and had a very good, young basketball team that’s getting ready to really ascend and do some great things.

“How do you fire a man that has never had a losing record and has been to the NCAA Tournament 3 out of the last 4 years?” guard Khalil Garland wrote on Twitter. “(I) just don’t understand.”

Arkansas was one of the most successful Southeastern Conference programs during Anderson's tenure; over the past five seasons, only Kentucky had more overall or league wins than the Razorbacks. Anderson's teams were 120-68 overall and 53-39 against conference opponents since the beginning of the 2014-15 season, and twice finished runner-up to Kentucky at the SEC Tournament.

Arkansas also reached the NIT twice under Anderson - 2014 and this year. The Razorbacks' season ended Saturday with a 63-60 loss at Indiana in the second round of the NIT.

The Razorbacks defeated Providence 84-72 on the road in the first round of the NIT on March 19.

“During his tenure with our program, Mike Anderson has represented the University of Arkansas in a first-class manner and with the highest level of integrity on and off the floor," Yurachek said. "We are grateful for Coach Anderson’s many contributions to our program and most of all for his investment in the lives of the many student-athletes he has coached. He has been a positive influence on their lives, encouraged them and supported them on, both their individual and collective, academic and athletic journeys. We wish Mike, his wife Marcheita and the entire Anderson family the very best.”

As an assistant to Nolan Richardson, Anderson previously spent 17 seasons at Arkansas from 1985-2002 - a run that included the program's only national championship, a national runner-up finish and three trips to the Final Four. He was the the Razorbacks' interim head coach for two games following Richardson's dismissal in 2002.

Anderson was hired at Alabama-Birmingham for the 2002-03 season and led the program to three NCAA Tournaments in four seasons. In 2004, UAB upset No. 1 seed Kentucky to advance to the Sweet 16.

Anderson was hired at Missouri in 2007 and spent five seasons with the Tigers. He led Missouri to three NCAA Tournaments, including 2009 when the Tigers lost to Georgetown in the Elite Eight.

In 2011, Anderson was hired to replace John Pelphrey as Arkansas' head coach following a 10-day search, leaving behind a veteran Missouri team that was ranked in the preseason top 25 the following year. His hire was met with much fanfare in Arkansas and his introductory press conference was attended by thousands of people at Bud Walton Arena.

Anderson retained his entire assistant coaching staff from Missouri and made only one change to his staff during his eight years in Fayetteville. Following the 2016 season, Matt Zimmerman was reassigned from assistant coach to an administrative role and replaced by with Scotty Thurman, a former Arkansas player who had worked in an administrative role since Pelphrey's tenure as head coach.

The Razorbacks never had a losing record under Anderson, but never came close to reaching the success they had during his years as an assistant coach under Richardson. Anderson's best season came in 2014-15 when Arkansas finished second to Kentucky - which went undefeated in the regular season - in the SEC standings and won 27 games, its most since the national runner-up finish 20 years earlier. Bobby Portis was named the SEC player of the year that season.

After a high roster turnover, the Razorbacks finished 16-16 and did not make the postseason the following year, but made the NCAA Tournament the next two years with win totals of 26 and 23.

Arkansas won first-round NCAA Tournament games over Wofford in 2015 and Seton Hall in 2017, but was eliminated by North Carolina in the second round both years. The Razorbacks lost their first-round game against Butler in 2018.

Anderson's contract was renewed following the seasons that included both of his NCAA Tournament wins. His most recent extension, which was signed amid a change in athletic department leadership in November 2017, ran through the 2021-22 season and guaranteed a severance pay of $1 million per year remaining on the contract.

Anderson was paid $2.55 million annually before bonuses, which ranked 39th in the latest USA Today database of basketball coaching salaries and was the second-highest salary for a public employee in Arkansas.

Prior to this season, the Razorbacks lost more than 80 percent of their scoring and minutes played to graduation or transfer. Arkansas returned only three players with experience in the program, including Daniel Gafford, who was named first-team All-SEC.

The Razorbacks began this season with a two-point overtime loss to Texas in the Armed Forces Classic, then won six in a row, including a one-point win over Indiana at home. Arkansas was up and down beginning with a one-point home loss to Western Kentucky in early December.

After a 5-4 conference start that included an upset of SEC champion LSU on the road, the Razorbacks lost six straight games before ending the regular season on a three-game win streak. Arkansas was eliminated from the SEC Tournament in its first game, a 66-50 loss to Florida.

The Razorbacks finished the year with a 12-6 record in Fayetteville. The six home losses were the most for an Anderson-coached team. He finished his tenure with a 122-21 home record, one win shy of Richardson for the most wins at the 26-year-old Bud Walton Arena.

Arkansas is one of at least four SEC programs making a coaching change this offseason. Vanderbilt and Texas A&M fired coaches Bryce Drew and Billy Kennedy following losing seasons, and Alabama announced a mutual separation with coach Avery Johnson following the Crimson Tide's omission from the NCAA Tournament and first-round home loss in the NIT.

LSU coach Will Wade has been indefinitely suspended since early March following reports that an FBI wire-tap captured his conversations with Christian Dawkins, a man who was convicted last year for funneling money to the families of basketball recruits.

“With our great history and tradition, a loyal fan base and a fully supported program within the SEC, I am confident that we will identify a leader that will elevate our men’s basketball program to a nationally competitive level on an annual basis,” Yurachek said.