Two congressmen have asked the U.S. Food and Drug Administration to halt all primate research at an Arkansas laboratory until a "pattern of negligence and abuse can be thoroughly investigated and corrected."

U.S. Reps. Matt Gaetz, R-Fla., and Brendan Boyle, D-Pa., sent the letter to FDA Commissioner Scott Gottlieb on Thursday after they learned of the Aug. 3 death of a 5-year-old rhesus monkey at the National Center for Toxicological Research near Pine Bluff.

"Enough is enough," Gaetz said Tuesday. "Taxpayers are sick and tired of the government's multimillion-dollar monkey business, and I'm proud to lead bipartisan efforts to cut wasteful and abusive primate research at the FDA."

Gottlieb permanently ended a nicotine study at the Arkansas lab in January 2018 after four squirrel monkeys died there from 2015-17.

At the time, Gottlieb said he had called for an independent, third-party investigation of all the agency's animal-research programs, starting with those conducted at the Arkansas lab. He also established a new Animal Welfare Council to provide centralized oversight of all animal-research activities and facilities under the agency's purview.

The remaining monkeys from the Arkansas nicotine-addiction study were retired to a sanctuary in Florida. But monkeys are used in other experiments at the Jefferson County center. 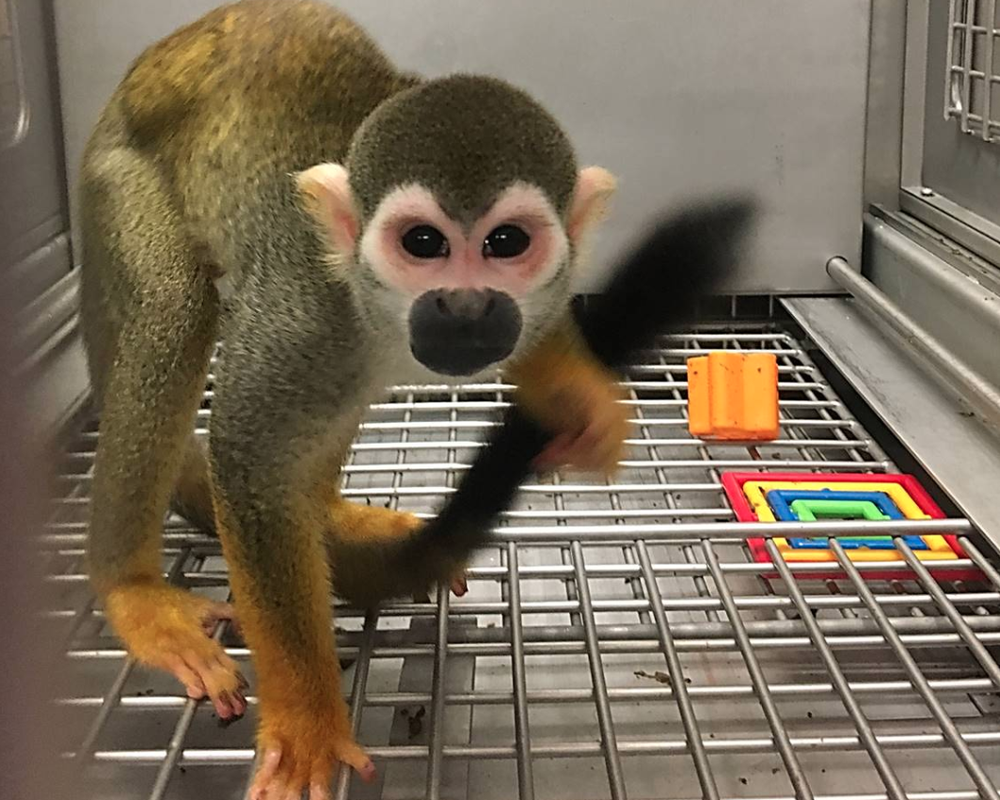 One of 26 monkeys that were moved from a lab in Arkansas to Jungle Friends Primate Sanctuary in Florida is shown in this photo submitted by the sanctuary.

The August monkey death was from "accidental strangulation," according to a final report that William Slikker Jr., director of the research center, sent Sept. 7 to Brent Morse, director of the the Compliance Oversight Division in the Office of Laboratory Animal Welfare in Bethesda, Md.

The monkey was left in a "restraint chair" in the Operant Test Battery chamber to play a game on a computer screen, according to the report.

The monkey was found with the "yoke of the restraint chair pushed all the way up touching the top of the chamber causing obstruction of the airways," Slikker wrote. The monkey had to be euthanized, according to the report.

The Institutional Animal Care and Use Committee was informed of the death Aug. 6 and initiated an investigation.

As a result, the committee recommended, and the lab "initiated" several changes, including installing live-feed cameras so the monkeys in the Operant Test Battery chambers can be monitored in real time, according to the report.

Gaetz and Boyle had written Gottlieb on Oct. 26 "applauding" his decision to end the nicotine testing on monkeys at the Arkansas lab. They also asked that the Animal Welfare Council review all FDA primate testing and make recommendations where it can be reduced and replaced so more of the lab monkeys can be retired.

Then they found out another monkey had died at the facility in August.

"Such a preventable animal death suggests a persistent lack of proper oversight, animal care and training at [the research center]," the congressmen wrote in their March 21 letter to Gottlieb. "These are similar to the problems you identified at the facility when you rightfully shut down its primate nicotine testing lab.

"We are confident that you share our concern that seven months after FDA pledged to address these serious problems, with a review of all agency animal research programs and the creation of an Animal Welfare Council, the abuses continued and caused the preventable death of yet another primate."

The congressmen also requested more information about the monkey death in August.

"I'm alarmed that one year after the FDA promised to clean up its controversial animal testing program following four other monkey deaths, and six months after I specifically asked Commissioner Gottlieb to implement primate testing reforms, monkeys are still dying horrible, avoidable deaths in the agency's labs," Boyle said. "Painful primate testing has no place in the 21st century, and I will continue fighting in Congress to end this inhumane, ineffective and outdated practice."

"Animal deaths in testing facilities are unfortunate, and all practical precautions should be in place so animal deaths and injuries can be avoided," said Westerman, a Republican. "By all accounts, [the National Center for Toxicological Research] followed proper protocol in reviewing and implementing changes to ensure accidental deaths like this don't happen again. Any other investigations into conduct should be allowed to run their course without interfering in [the research center's] daily, standard operations."

Gottlieb couldn't be reached for comment Tuesday. The Washington Post reported that Gottlieb has resigned effective next month and Norman "Ned" Sharpless will serve as acting commissioner.

The death of the monkey in August was made public earlier this month after the group Stop Animal Exploitation Now got the information through an open-records request and furnished it to the White Coat Waste Project, a coalition that wants to stop "wasteful" government spending on unnecessary animal experiments.

"Over 1 million of our supporters have asked Congress and the FDA to stop wasteful primate testing and retire the animals to sanctuaries, and we're grateful to Reps. Boyle and Gaetz for continuing to hold the FDA accountable for its taxpayer-funded animal abuse," said Justin Goodman, vice president of advocacy and public policy at the White Coat Waste Project.

According to documents posted on www.fda.gov, the nicotine-addiction study began in 2014 with 24 male monkeys -- 12 adults and 12 adolescents. Research needed to be done on adolescent monkeys because tobacco use by humans often begins in adolescence, according to one of the documents.

According to documents the White Coat Waste Project obtained from the FDA, the squirrel monkey deaths at the Arkansas facility included:

• August 2015: A 1-year-old monkey died from anesthetic complications during a brain scan.

• May 2017: A monkey was euthanized after being found near death.

• July 2017: A monkey died from "laryngeal and tracheal obstruction."

Print Headline: 2 lawmakers seek halt to use of monkeys in research at Arkansas lab