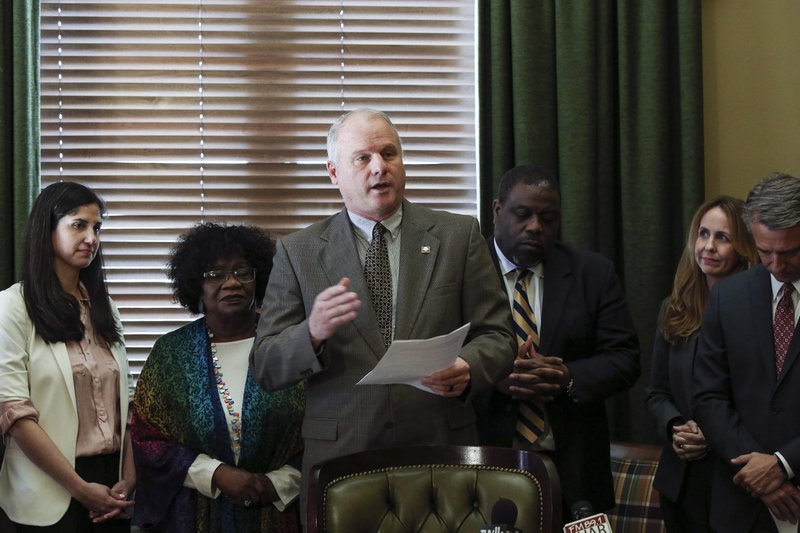 An Arkansas House committee on Tuesday advanced legislation that would increase the homestead property-tax credit from $350 to $375 per parcel and also help counties buy voting machines.

Counties are reimbursed for giving the credits through a trust fund financed by a statewide half-percent sales tax. Besides increasing the tax credit, SB447 would divert $8.2 million from the property tax relief trust fund to the county voting systems grant fund.

The bill also would shift other money from the trust fund to the state's long-term reserve fund. Hendren's original bill said general revenue would receive the money. But the panel voted to add an amendment by Rep. Lanny Fite, R-Benton, to put the money in the reserve fund instead. The amendment also added committee Chairman Joe Jett, R-Success, and Fite as the bill's co-sponsors.

The committee later endorsed Senate Bill 561 by Hendren that would transfer the administration and collection of the state's franchise tax from the secretary of state's office to the state Department of Finance and Administration.

The action came after the committee voted to add an amendment to delay the transfer from Jan. 1, 2020, to May 1, 2021. The delay "is primarily due to technical issues arising because [the secretary of state] and [Department of Finance and Administration] are on different systems," secretary of state spokesman Chris Powell said after the meeting.

SB561 also would implement several other changes recommended by the Tax Reform and Relief Legislative Task Force, of which Hendren was a co-chairman.

The Senate approved SB447 on March 11, while the Senate Revenue and Taxation Committee had earlier twice declined to recommend Fite's competing House Bill 1321. The Senate tax committee's action led Fite to declare on March 6 that he would try to defeat Hendren's bill in the House committee if it cleared the Senate.

Fite's HB1321 also would increase the homestead credit by $25 to $375, but in addition would authorize a study by the House and Senate tax committees on the future use of the property tax relief trust fund.

"I want to thank Rep. Fite and Chairman Jett for helping us come to some common ground on this because what we have here is something that I think is good policy and also accomplishes some of the goals that both of us had," Hendren told the House committee on Tuesday.

As part of his re-election campaign last year, Republican Gov. Asa Hutchinson proposed increasing the homestead credit from $350 to $375.

The homestead credit was last increased $50 by the Legislature in 2007 at the behest of then-Gov. Mike Beebe, a Democrat. In 2000, voter approval of Amendment 79 to the Arkansas Constitution created the tax credit.

Hendren said his bill "also accomplishes something that we have been talking about for a long time here in the General Assembly, which is finishing off funding the voting machines that .... across the state have been somewhat funded but not completely funded, so it makes a one-time transfer of about $8.2 million to finish that off, assuming the counties come up with $5 million to match that."

The matching required for the counties ranges from about 50 percent to about 90 percent, he said.

SB447 also would authorize the transfer of about $5 million a year from the property tax relief trust fund to cities and counties, and that "has been going on and many of us didn't realize," Hendren said.

With the adoption of Fite's amendment, shifting other excess funds to the long-term reserve fund would help improve the state's bond rating, so "I think it's a good compromise," he said.

The long-term reserve fund requires a two-thirds vote of the Legislative Council to access the funds, Hendren noted. The fund's current balance is $126.6 million, said Scott Hardin, a spokesman for finance department.

SB561, the other bill endorsed Tuesday, also would:

• Require the Assessment Coordination Department to adopt mandatory guidelines to be followed by county assessors to identify property exempt from property taxes and for assessing business inventory. The department would report noncompliance by counties to the Legislature.

• Require the finance department to report to the Legislative Council and the governor before each regular legislative session on the effect of each income and sales tax exemption, discount, credit and deduction. It will cost about $875,000 for staff and consulting services and computer software services prepare the biennial reports.

"One of the things we noticed as we reviewed our tax code is we are penalized in many of our national rankings because we have no systematic review process of our exemptions and credits and our tax code. Most states do and almost always, when they roll through those, they see some that need to be eliminated or antiquated," Hendren said.

• Provide a sales tax exemption for advertising space on a public transit bus, effective Oct. 1. The revenue loss would be about $50,000 a year. Hendren said the state already exempts billboard advertising from sales tax.

• Require more information on all-terrain vehicles to ensure that they are eligible for the farm machinery and equipment sales tax exemption at the time of purchase, effective Oct. 1.

Hendren said this exemption has been abused in other states and "ATVs that are for recreation have claimed the exemption."