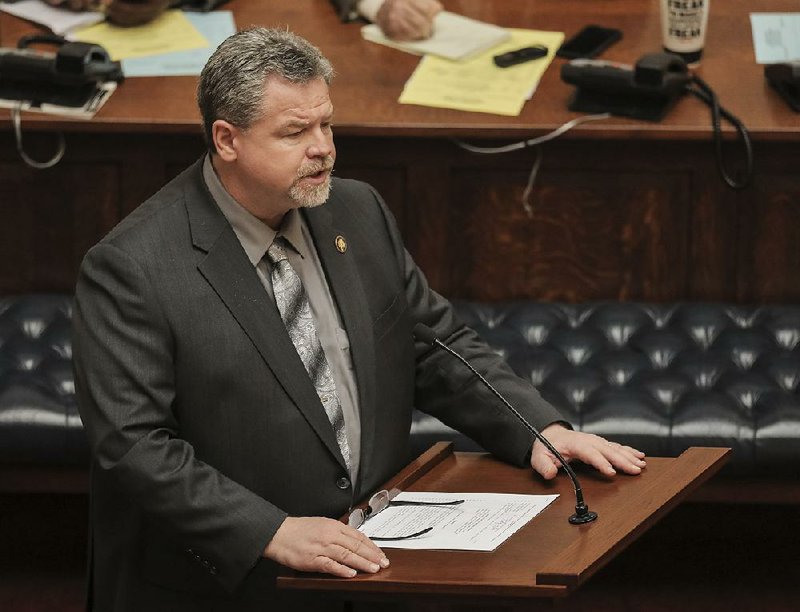 Sen. Alan Clark speaks in the Senate chamber Tuesday for his Senate Joint Resolution 15, which proposes a constitutional amendment to limit lawmakers to 12 consecutive years of service. Lawmakers could serve again after sitting out four years. More photos are available at arkansasonline.com/327genassembly/

The Arkansas Senate on Tuesday approved a measure to refer to voters a proposed constitutional amendment that would limit state lawmakers to serving a dozen consecutive years and then allow them to return to office after a break of four years.

Without any debate, the Senate voted 27-3 for Senate Joint Resolution 15, by Sen. Alan Clark, R-Lonsdale. Clark first made a pitch for the measure and answered a handful of questions for about 15 minutes.

Sens. Jim Hendren, R-Sulphur Springs; Jonathan Dismang, R-Searcy; and Bruce Maloch, D-Magnolia, voted against the resolution, which now goes to the House. If approved there, the proposal would go on the 2020 general election ballot; no action by the governor is required.

Under Amendment 94 to the Arkansas Constitution approved by voters in 2014, lawmakers are now limited to serving up to 16 years in the House or Senate or combined service in both chambers. Senate terms are four years and House terms are two years. Senators, who draw two-year terms after once-a-decade legislative redistricting, are eligible to serve that term beyond the 16-year limit. Amendment 94 loosened limits set in a previous constitutional amendment.

"However, there is a move to change term limits in Arkansas," he said. He was referring to an effort to place an initiated proposal on the 2020 ballot.

"We don't need to pass a very bad term limits amendment and, if we don't do something [and an initiated proposal is referred to voters], that is what is going to happen. If we don't do this, we leave the door open for someone else to gut state government, particularly the people's branch," he said.

On March 14, the private Arkansas Term Limits ballot committee filed its own proposed constitutional amendment that would set the maximum at 10 years. That proposal is similar to the committee's last one that the Arkansas Supreme Court struck from the November 2018 ballot. To get its latest proposal on the 2020 ballot, the committee will have to collect more than 89,000 valid signatures of registered voters.

Under SJR15, state lawmakers elected after Jan. 1, 2021, would be limited to 12 consecutive years in the House, Senate or both. The two-year Senate term related to redistricting would be included in that total. Once a lawmaker served 12 years, he could serve again after sitting out four years.

"That gives someone time to become experienced and to become effective while still accomplishing the goal of keeping term limits short enough that we get new blood," Clark said.

Also under the resolution, lawmakers now in office who serve 16 years (or 18 or 20 years because of Senate redistricting) would become eligible for subsequent service in the General Assembly but only once they are out of office for four years.

"This especially I think comes into play when we have some folks serve in their 20s and someday in their 50s, something might happen to the state and people say we could really use this man, we could use this woman, to come back and help us and under current law even they couldn't do that, so this changes lifetime term limits to successive term limits," Clark said.

Fifteen of the nation's 50 states have term limits for state lawmakers, including nine states that have limits on serving successive years and six that have lifetime limits, he said.

"For those that are worried that this would create lifetime legislators, we know from experience" in states with similar provisions allowing lawmakers to return to serve, only 5 percent of lawmakers returned, he said.

The latest Arkansas Term Limits proposal would limit lawmakers to three two-year House terms; no more than two four-year terms as a senator; or any term that if served would exceed 10 years in the General Assembly. The two-year redistricting term in the Senate would be used in calculating the 10-year limit. Service in the General Assembly on or after Jan. 1, 1993, would be included in the calculation.

A 10-year term limit for Arkansas lawmakers would be the nation's strictest. California and Oklahoma limit lawmakers to 12 years.

Afterward, Hendren said he voted against the proposal because "first off, I am not a big fan of term limits in general.

"And second off, I just prefer that issues like that come from the voters as opposed to us trying to do it at this point," said Hendren, who served in the House from 1995-2001 and in the Senate since 2013.

"I don't have any real fundamental problems with 12 years or 16 years. ... I think there is better ways to control the quality of the Legislature than that," he said.

Arkansas lawmakers can refer up to three proposed constitutional amendments to voters in the 2020 general election.

They've approved one so far. House Joint Resolution 1018, by Rep. Jeff Wardlaw, R-Hermitage, would permanently extend the half-percent sales tax for highways. That tax was originally approved by voters in 2012 for a 10-year period.

The amendment also barred state lawmakers from accepting certain gifts, such as meals and drinks in one-on-one meetings, from lobbyists; prohibited direct corporate and union contributions to candidates; and extended the one-year waiting period to two years before former lawmakers can register as lobbyists for private clients.

Amendment 94 also created a citizens commission to set the salaries of state elected officials. The salaries were previously determined by the Legislature.