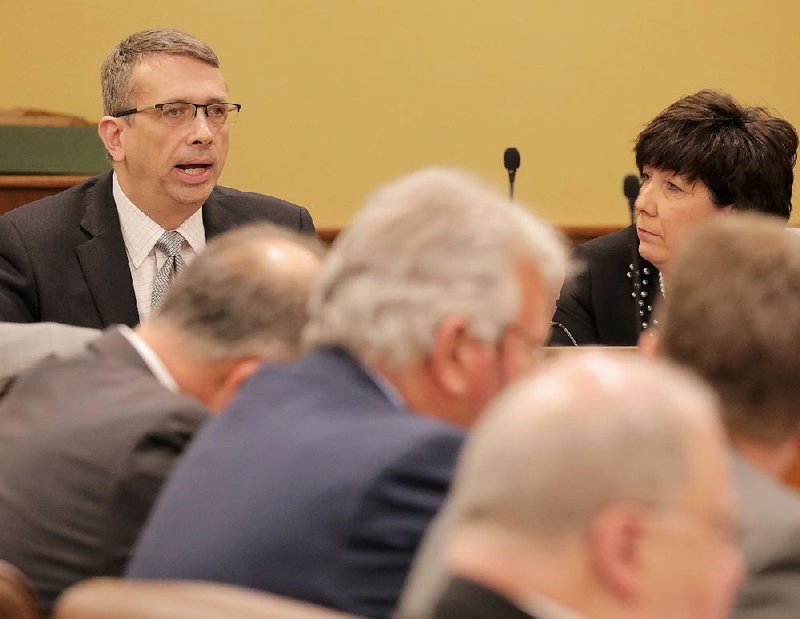 John Bailey, director of environmental and regulatory affairs for the Arkansas Farm Bureau, spoke for more than half an hour in favor of Senate Bill 550. At right is Rep. Mary Bentley, R-Perryville, House sponsor of the bill. ( John Sykes Jr.)

A bill that would change how Arkansas' hog farms and many dairy farms receive permits won't be presented again this session after the bill's House sponsor asked lawmakers to move it into interim study Wednesday.

After nearly two hours of discussion on the bill, which had been scheduled as a special order of business, Rep. Mary Bentley, R-Perryville, asked the House Agriculture, Forestry and Economic Development Committee to move the bill to interim study for possible proposal in the 2021 legislative session. No lawmakers opposed the motion.

The decision to pull the bill comes a week after senators approved it and sent it to the House, five days after federal regulators said they were reviewing the bill and two days after Gov. Asa Hutchinson said he hoped lawmakers would "postpone" the bill because of EPA concerns and anticipated changes to state government.

Bentley said there was a lot of confusion at the meeting Wednesday morning and told lawmakers that she wanted to clear things up before presenting the bill again.

"I'm disappointed in some of the things that have been brought up today," she said, adding that there is no reason for people to be confused and that she still thinks it's a good bill.

"None of us like the smell of swine litter, but we sure like the taste of bacon," she said.

Debate surrounding the bill Wednesday largely concerned disagreements over what it would actually do and what it said versus what its supporters said they had intended.

Currently, the commission reviews liquid waste disposal plans, formally called "nutrient management plans," and determines whether they meet the commission's standards. The plans are then submitted as part of farms' operating permit applications to the Department of Environmental Quality.

Under an amendment filed Monday by Bentley, both the local conservation districts and the commission would be required to approve plans before the commission could issue a permit.

The amendment, which was never voted on, also would have included statements saying that the bill would not interfere with U.S. Environmental Protection Agency programs delegated to the Department of Environmental Quality and that its provisions would be considered null and void if the EPA decided to take back the permitting authority delegated to states.

The EPA has delegated permitting authority for National Pollutant Discharge Elimination System permits to the department, but only one hog or dairy farm has one -- C&H Hog Farms in Newton County, which has been ordered by the department to close. Other hog and dairy operations have no-discharge permits through Regulation 5, which implements a state law, rather than the Clean Water Act's National Pollutant Discharge Elimination System permitting program.

Although the different types of permits were not spelled out in the bill, John Bailey, director of environmental and regulatory affairs for the Arkansas Farm Bureau, said the Farm Bureau would not support moving the federal permits to the commission. Bailey acknowledged the complications that would come with moving a federal permitting program.

Opponents argued that many of those farms that go to both agencies would still need other construction and stormwater permits from the department.

Wednesday's meeting started with more than a half an hour of testimony from Bailey.

Bailey went through Bentley's amendment line by line, trying to assure lawmakers that concerns people had brought up had been addressed in the amendment. He additionally contended that the Farm Bureau -- which conceived of the bill -- did not intend to have the bill say things opponents were concerned it said, such as stripping people of the permitting process' public notice requirements, keeping records secret or weakening regulations in any way.

Lawmakers and people testifying against the bill contended that the amendment did not go far enough.

The amendment does not adopt Regulation 8, an Arkansas Pollution Control and Ecology Commission regulation that the Department of Environmental Quality must follow, said Colene Gaston, attorney for Beaver Water District in Northwest Arkansas. 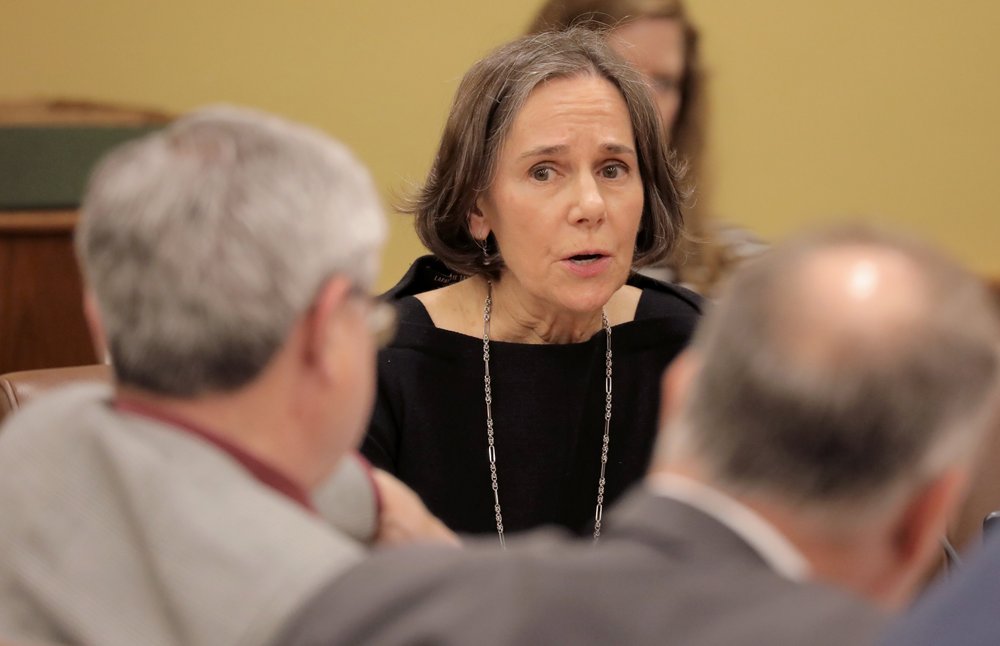 Colene Gaston, with the Beaver Water District testifies against Senate Bill 550, which aims to to amend the law about liquid livestock litter utilization during a meeting of the House Committee on Agriculture, Forestry, and Economic Development at the state capitol in Little Rock.

That regulation outlines the public notice, public participation and administrative appeals processes for permitting. The water utility uses those, along with the department's online records and databases, to stay on top of facilities that apply for and operate under permits in Beaver Lake's watershed.

The commission does not have those online resources or those processes, Gaston said, and the bill would not require them.

Though Bailey said the Farm Bureau intended to keep the permitting process the same while moving it to another agency, "intent is not sufficient," Gaston said.

"It needs to be in the bill itself," she told lawmakers.

Tad Bohannon, chief executive officer of Central Arkansas Water, said he was additionally concerned that protections provided to Lake Maumelle -- his utility's main drinking water source -- by the department may not be kept by the commission.

Bohannon also posed another concern about transparency that was echoed by others, including committee member Rep. Jeff Wardlaw, R-Hermitage: An Arkansas state law, Ark. Code Ann. 15-20-1006, concerning only the commission declares that information the commission possesses related to nutrient management plans is not public record.

"So nowhere in this bill do you take that out," Wardlaw told Bailey.

Bailey said he believed the law pertained only to poultry farms in the 13-county nutrient surplus area in Northwest Arkansas, but Wardlaw said that did not appear to be the case for him and that he didn't see the word "poultry" in the law.

The law states: "Any records collected by the Arkansas Natural Resources Commission in furtherance of this subchapter that contain information about a specific nutrient management plan or specific nutrient application shall not be made public record."

The law is not included in the Arkansas Freedom of Information Act state code, which outlines the records that are exempt from public inspection. The act states in its definition of "public records" that "all records maintained in public office or by public employees within the scope of their employment shall be presumed to be public records." The law then lists 23 exemptions, which must be changed by legislation.

Lawmakers and people who testified also debated a letter sent by the EPA to Department on Environmental Quality Director Becky Keogh last week notifying the state of a review of the bill. 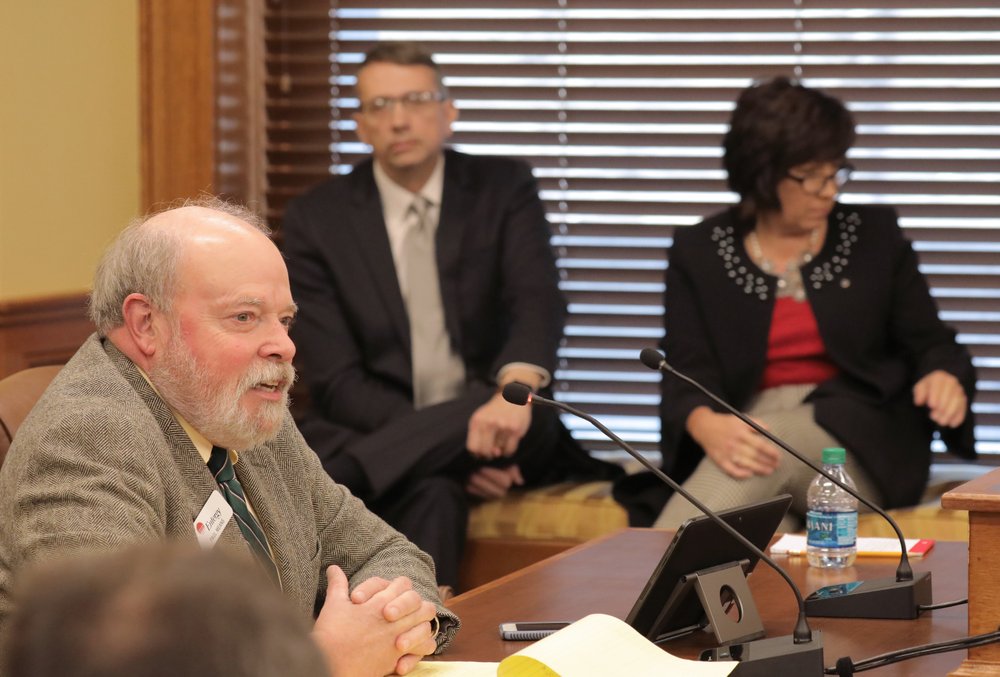 Paul Means, left, speaks against Senate Bill 550, which aims to to amend the law regarding liquid livestock litter utilization during a meeting of the House Committee on Agriculture, Forestry, and Economic Development at the state capitol in Little Rock Wednesday morning. Behind Means, center, is John Bailey with the Arkansas Farm Bureau and the house sponsor of the bill, Representative Mary Bentley at right. Bailey supports the bill.

"I think they all got distracted by the EPA letter," said Jessie Green, executive director of the White River Waterkeeper and a former department water division engineer, adding that the Regulation 5 permitting program largely implicated by the bill is not subject to EPA approval. Green opposed the bill.

After the meeting, opponents of the bill breathed a sigh of relief outside the committee room.

"I guess for right now this is the best possible thing," Green said.

But Green said she didn't think concerns could be resolved. The way the two state agencies are set up is too different to resolve concerns with anything supporters had offered to put in the bill, she said.

It wasn't the outcome Bailey or Bentley wanted.

"At least we can continue the conversation," Bailey said after the meeting.

Bentley said she did not want to present the bill "if we didn't have the votes today," and said, when asked what she wanted to be studied, that interim study was "just a matter of looking at things more intently."