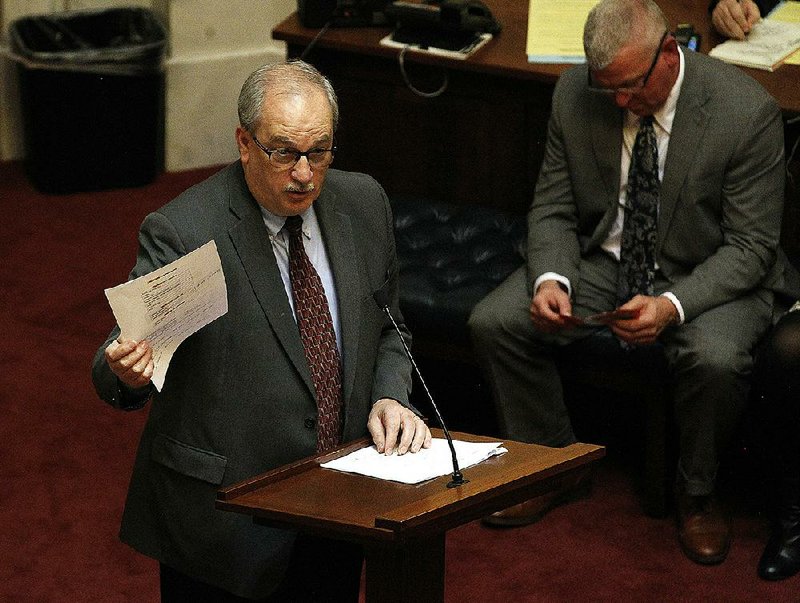 Sen. Kim Hammer, R-Benton, is shown in this photo.

Tamara Milby turned to the Arkansas Legislature on Wednesday to guarantee that her teenage daughter gets the health care she needs to prevent migraines, pain in the bottoms of her feet, extreme memory loss and aggression.

Milby spoke to a House committee that advanced a bill that would require insurance companies to cover certain treatments for pediatric acute-onset neuropsychiatric syndrome and pediatric autoimmune neuropsychiatric disorder associated with streptococcal syndrome, more commonly known as PANS and PANDAS. The requirement would kick in at the start of 2020.

The House Insurance and Commerce Committee recommended Senate Bill 252, sponsored by Sen. Kim Hammer, R-Benton, and Rep. Les Warren, R-Hot Springs, with no opposition Wednesday. It passed in the Senate on Monday. It goes to the House next.

The bill also would establish an interdisciplinary panel to examine "all components" of PANS and PANDAS disorders and create a protocol "for the treatment of and diagnostic framework for the coverage of PANS and PANDAS by June 1, 2019," according to the bill. The recommendations are to be submitted to the House and Senate committees that deal with public health.

PANS and PANDAS are generally caused by strep bacteria clinging to children's internal organs, such as their brains, and causing symptoms of obsessive compulsive disorder, tics, mood shifts and anxiety attacks, according to the National Institute of Mental Health website.

Matthew Brumley, the director for the Saline Health Foundation, spoke in favor of the bill. The foundation is in Benton, and organizes projects to improve health and raises awareness for PANS and PANDAS.

Brumley said that although some estimates say 1 in 250 children develops one of these diseases, it is difficult to diagnose, so more could have contracted it.

Milby's daughter, Emma Horn, has PANS, she told committee members through tears. Emma began experiencing symptoms such as migraines in November. She dropped out of her school in Sherwood, where Milby said she was doing well, and the family started going to doctors.

They visited out-of-state specialists to get the diagnosis and then to start treatment. Emma's condition worsened -- memory loss began, Milby said. She now can't remember how to brush her teeth, use a spoon or even who she is at times.

The family learned about intravenous immunoglogulin treatment, which has been known to prompt remission, and learned this week that their insurance won't cover it. Milby said she has lupus and gets her income from disability checks.

"I cannot afford to pay for this," she said.

Cathy Puckett, another mother of a child with PANS, said her son Cameron went into remission long enough using the intravenous treatment to attend a year of college at the University of Central Arkansas.

She said she and her family struggled for years to learn what was wrong with Cameron when he got more reclusive and started on "rituals" such as going in and out of his bedroom close to 300 times.

"Cam would have episodes of falling on the floor and screaming, screaming for God to help him," Puckett told the committee.

After the treatments, Cameron got better and moved out on his own at 21. But in January, he went on another downward spiral and had to return home. He started getting aggressive and attacked his mother, so the family had to put him in a substance abuse facility to keep him and others safe, Puckett said.

He is in a substance abuse facility not because of addiction, but to keep him safe, Puckett said. He stayed in a psychiatric facility before, but his stay there ended.

The family is trying to get Cameron another round of the intravenous treatment, but hasn't been able to because of insurance complications, Puckett said.

"This is a matter of life and death," she said. "We have lost three of our kids in our PANS, PANDAS community to suicide in this year. ... This is truly a nightmare that we can't wake up from."

Warren said in a later interview that he wanted to sponsor the bill because to him, the issue is personal. He has known Cameron for years and had him in youth classes at their Hot Springs church.

"We need this in order to get this kid's life back to him," he said.