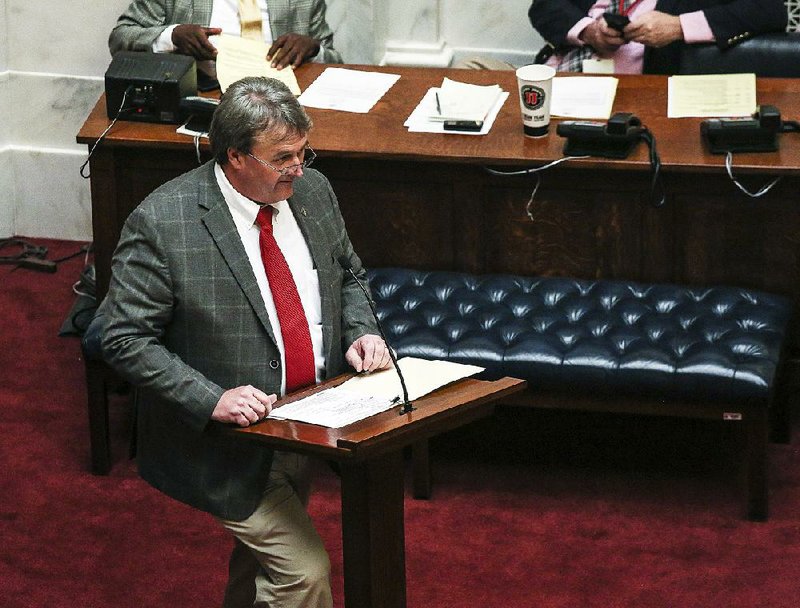 Sen. Blake Johnson discusses his school vouchers bill Thursday before it won Senate backing on a 21-10 vote. More photos are available at arkansasonline.com/329generalassembly/.

The Arkansas Senate voted Thursday for a bill that would create a dollar-for-dollar tax credit for those who want to contribute to a program to help low-income students attend private schools instead of public ones.

Senate Bill 539 by Sen. Blake Johnson, R-Corning, would create roughly 400 private-school "scholarships" for eligible students across the state, using about $3 million in donated funds each year.

Supporters on Thursday argued the voucherlike program would expand opportunities to families who usually can't afford private schools. Opponents cautioned that such a program lacks accountability and favors some students more than others.

The bill, which would take effect this tax year, passed the Senate 21-10 with two voting present and two not voting at all. The bill next moves to the House.

"It's another tool in the toolbox for parents across the state of Arkansas who have an interest in determining the education for their own students," said Sen. Jane English, R-North Little Rock, chairman of the Senate Education Committee.

SB539 is the first voucher program to clear either chamber of the General Assembly this session, and if it becomes law, it would represent the state's most expansive private-school-choice program. Currently, the state offers under the Succeed Scholarship Program private-school awards to about 250 students who have disabilities.

A proposal to create a $3.5 million pilot voucher program for low-income children in Pulaski County was introduced last week with vocal support from Gov. Asa Hutchinson. Johnson, who also sponsored that bill, said he decided to pursue SB539 after concerns were raised about the second proposal being limited to Pulaski County.

Hutchinson has said he supports both bills, but he'd prefer the Pulaski County pilot program.

The Arkansas Tax Credit Scholarship program proposed by SB539 would be capped at $3 million annually, and the tax credits and private-school vouchers would be available on a first-come, first-served basis.

The tax credits would be accessible by any taxpayer -- corporate or individual -- contributing to the nonprofit groups that will administer the private-school scholarships, called "Student Support Organizations" in the legislation.

The credits may be used to offset some or all of the income tax due in a given year for the contributing taxpayers, according to the Department of Finance and Administration. Unused credits could be carried forward up to five years.

The vouchers would be available to students from families making no more than 150 percent of the amount that qualifies a student for federal school lunch assistance ($69,653 for a family of four).

Students from military families, foster children and students with disabilities also would qualify for the program.

The scholarships could equal the state's foundation school-funding rate, which is calculated on a per-student basis, which is $6,781 this school year.

Sen. Joyce Elliott, D-Little Rock, spoke Thursday against the bill from the Senate floor, saying that the $3 million would be better spent on after-school or prekindergarten programs. Elliott, a retired teacher and vice chairman of the Senate Education Committee, said that collective data on similar programs show that sending public-schools students to private schools doesn't result in improved achievement or attainment.

Johnson pointed to a nondiscrimination clause in the bill, and a section that requires the private institutions to comply with federal anti-discrimination laws.

The scholarships would be administered through nonprofit organizations that may use up to 10 percent of funds for administrative costs. The organizations would not be allowed to charge application fees to students, and they'd be barred from steering students toward or away from certain schools.

Donors also would be unable to earmark contributions for certain students or schools.

The funds, under the bill, may be spent on tuition, books, tutoring, standardized tests and other approved education costs.

Private schools may participate in the program if they meet accreditation requirements or are in the accreditation process before the state Board of Education, the Arkansas Nonpublic School Accrediting Association Inc. or another accrediting association recognized by the state.

Those organization are barred from discriminating "among applications for a student scholarship on the basis of gender, national origin, race, ethnicity, religion, or disability."