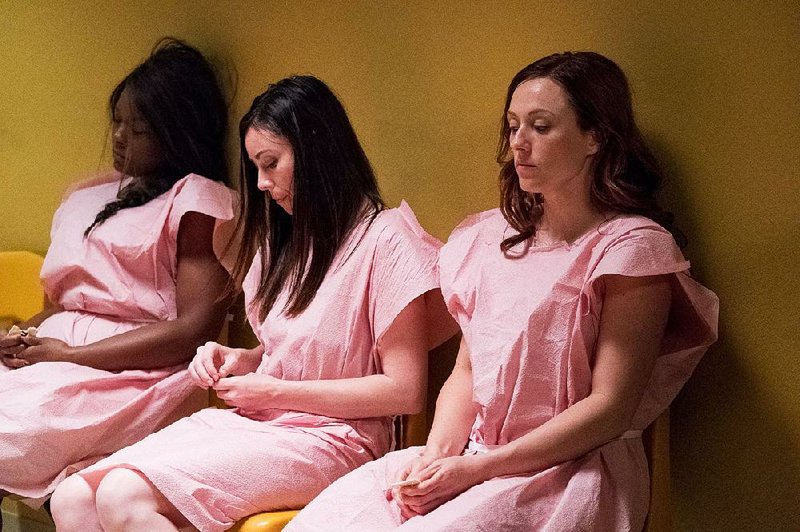 Abby (Ashley Bratcher, right) recuperates after a procedure in Unplanned, a faith-based film written and directed by Cary Solomon and Chuck Konzelman.

I can understand why some critics would rather stay away from movies like Unplanned that exist primarily to promote what might be argued is a hot take political point of view. You might also fairly argue that the argument Unplanned makes transcends politics, and that it is reductive to call it agitprop. But that doesn't help us work through the tendency of movies like this to polarize audiences.

Basically what I'm saying is that you've got your mind made up about Unplanned, you're either sympathetic to its anti-abortion stand (I know I've just angered some of you by not using "pro-life") or you're not. No one who sees the movie is likely to change positions on abortion, and I'm not sure anyone ought to base any important decision on something they think they learned from a movie. All I can really do is make roughly half the people who read this review mad at me.

Rating: R, for some disturbing/bloody images

If I write a really good review I might manage to make nearly all of you mad at me.

So a lot of people who are smarter than I am just let movies like this go. And sometimes that suits the marketing aims of the people who make and distribute little films like this, because then they can claim that "the media" is part of the conspiracy against them. I suspect that's why it's sometimes hard to get screening links to movies like this -- the people marketing the movie make the calculation that being ignored fits their business plan better than a tepid or bad review.

So maybe no one on either side works too hard to get a review of the movie in the newspaper or online. Plenty of "regular people" will contribute five stars and thumbs up on various social media platforms. Even if a critic does review a film, there's usually a reflexive backlash -- while the Democrat-Gazette likely gave more attention to last year's Gosnell: The Trial of America's Biggest Serial Killer than any other general interest publication in the country, I still received dozens of letters and phone calls accusing us of ignoring the film.

But we don't ignore movies here. Whenever anyone is willing to show me their movie in advance, as the people distributing Unplanned were, I am willing to watch it and to try be fair to it -- to give it the same chance as any other movie to work whatever particular charm it might have. Sometimes I end up writing harsh things -- Dinesh D' Souza's bad faith-based movies are not only bizarrely conceived, they're badly executed. Some well-intentioned films are just badly written. Just because people are sincere doesn't mean they are competent.

Unplanned is a competently made film that has some moments of genuine grace and a winning lead performance by Ashley Bratcher, who had a small part in Michael Polish's 2015 90 Minutes in Heaven, which is one of the more artful of the so-called Christian movies yet made. In Unplanned, she portrays Abby Johnson, a real-life celebrity in the pro-life (there, I said it) world, famous for her Road to Damascus conversion after working for years for Planned Parenthood. Johnson was director of Planned Parenthood in Bryan, Texas, the youngest director of a clinic in the nation and PP's 2008 Employee of the Year, until she walked out after assisting in an abortion of a 13-week-old fetus.

It is a compelling story, though Unplanned might have told it with a bit more subtlety. It was given an "R" rating by the MPAA, and while I generally think the rating system is capricious and silly (and that Unplanned doesn't "deserve" the rating), I also think that the rating controversy helps the movie's marketing. And that the sequences for which the rating was presumably given -- medical gore and abortion sequences -- might have been handled more effectively, if not less graphically, than they were.

Anyway, what's very good about Unplanned is that it does not demonize young women who decide to seek abortions -- how could it, Johnson herself had two before her epiphany -- and that it takes a fairly realistic approach to how life is lived in practice by young people. Abby suffers a disastrous marriage and is attracted to the side of Planned Parenthood that she understands genuinely helps young women. She is repelled by the hatefulness of some of the protesters who gather outside the clinic to insult and harass clients and staff.

Of course, not all the clinic workers are selfless -- they aren't above turning the sprinklers (or calling the police) on the restrained and peaceful 40 Days for Life activists who try to gently engage clients from beyond the fence. Abby's mentor Cheryl (Robia Scott) is particularly unpleasant.

Abby eventually lands in a good marriage, supported by family, and while both her husband and parents are opposed to her work she persists. She is not disowned, there is no terrible rift, just a continuing dialogue between people who love each other but disagree. It's nice to see this dynamic portrayed on screen, especially in a movie that could have defaulted to polemics. This is a surprisingly nuanced film, especially since writer-directors Chuck Konzelman and Cary Solomon worked on Harold Cronk's heavyhanded God's Not Dead movies.

Aside from the inconsistency of the cast (besides Bratcher, Emma Elle Roberts and Kaiser Johnson do solid work as, respectively, Abby's friendly foil and trial lawyer), what's average, or even below average, about the film is the third act, where we are given to understand that while the individuals who work for Planned Parenthood may be decent and caring folks doing what they believe best, the organization itself is one-dimensional, cynical and likely a George Soros front group. Noxious MyPillow CEO Mike Lindell -- who reportedly provided $1 million of the film's budget -- turns up as a form of fan service. All pretense that we might calmly reason together to navigate a complicated issue is dropped.

That's too bad, because for two-thirds of the movie, Unplanned seems to understand that faith is indeed a gift and that certainty is, in and of itself, no virtue. I don't think they could have changed anyone's mind, but I wish they believed they might have.