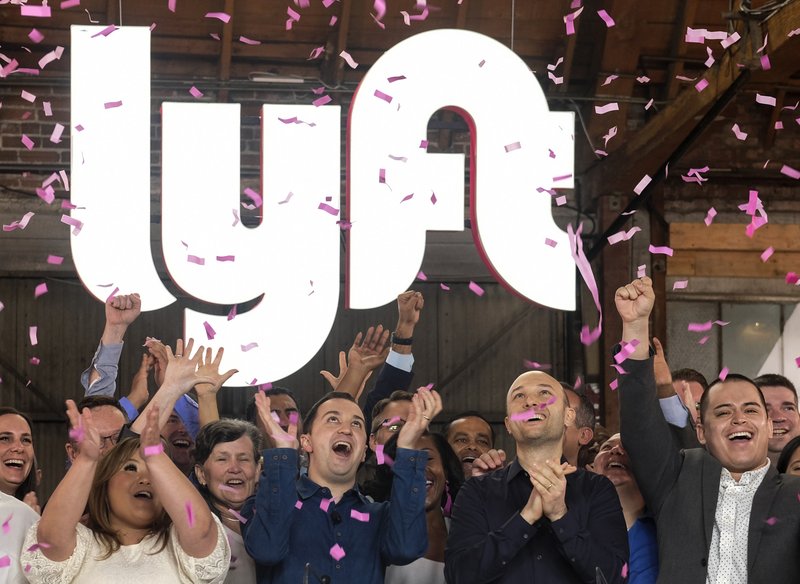 Lyft co-founders John Zimmer, front second from left, and Logan Green, front second from right, cheer as they as they ring a ceremonial opening bell in Los Angeles, Friday, March 29, 2019. On Friday the San Francisco company's stock will begin trading on the Nasdaq exchange under the ticker symbol "LYFT." (AP Photo/Ringo H.W. Chiu)

Stocks finished broadly higher Friday as Wall Street closed out a first quarter that saw the market's biggest gain in nearly a decade.

The benchmark Standard & Poor's 500 index is now up 13.1 percent this year, a turnaround for stocks after a 14 percent sell-off in the last three months of 2018.

New data pointing to lower inflation and renewed optimism among investors that the trade talks between the U.S. and China are making progress helped drive the rally. Bond yields also continued to rise from recent lows, easing concerns about a steep drop in long-term yields heading into this week.

"Low interest rates, low inflation, possibly better trade, that's enough here to move the market higher," said Mile Baele, senior portfolio manager at U.S. Bank Wealth Management. "It's been some time since we've had some enthusiasm in the [initial public offering] market, and that might be helping the markets today as well."

The U.S. stock market rebounded strongly in the first quarter after closing out 2018 with a steep sell-off. The S&P 500's technology sector powered much of those gains, climbing 19.3 percent over the past three months.

"The real lesson we take away from this quarter is that over time fundamentals control," said Brad McMillan, chief investment officer for Commonwealth Financial Network, which has $161 billion in assets. "We saw consumer confidence high, we saw jobs growth high, earnings continuing to grow, albeit somewhat slower. When you put all these things together, it says there may be panic-driven declines, but ultimately the fundamentals control."

The Federal Reserve sparked the rebound by announcing a more patient approach to further interest-rate increases. The move reassured investors, who'd worried that the Fed would continue to raise rates as signs surfaced that the global economy was slowing.

"As disappointing and perhaps shocking as the sell-off in the fourth quarter was, with the Fed getting out of the way, the rebound has been equally as shocking," said Baele. "Essentially, we're just back to where we were in October."

The first quarter's strength helped prolong the bull market for U.S. stocks, which marked its 10th anniversary in March, and is now the longest ever.

The last time the S&P 500 index turned in a better quarterly performance was in the third quarter of 2009, when it climbed about 15 percent.

Friday's gains followed a broad rally in global stocks as investors hoped for progress in U.S.-Chinese trade talks. U.S. Treasury Secretary Steve Mnuchin called the U.S.-China trade talks "constructive" and said in a tweet Friday that he looked forward to continuing the talks in Washington next week.

Officials from the world's two biggest economies are aiming to put to rest a dispute over technology and other issues. Chinese Vice Premier Liu He is expected to travel to Washington next week.

Bond yields rose for the second-straight day, allaying traders' concerns after a steep drop in long-term yields over the past week. The yield on the benchmark 10-year Treasury note rose to 2.40 percent from 2.39 percent late Thursday.

Investors remain anxious about the slowing global economy. Economists believe growth has slowed this year because of weaker growth prospects in China and Europe, the dampening effects on U.S. exports from the trade battles of President Donald Trump's administration and the waning boost from the 2017 tax cut and government spending.

The more downbeat outlook for economic growth has prompted the Federal Reserve to signal that it plans to keep its benchmark interest rate on hold this year.

Among the biggest movers Friday were companies that issued their latest quarterly report cards.

CarMax led all stocks in the S&P 500 with a gain of 9.6 percent after the auto dealership chain's fourth-quarter earnings topped Wall Street's forecasts, even as revenue fell short of expectations.

Investors will be focusing more on corporate earnings in coming weeks, as the next big wave of company results kick into gear in mid-April.

Commodities had their best quarter in almost three years, driven by supply concerns and optimism over demand.

The outlook for demand is running into troubling signs in the U.S. and China, the two biggest consumers. In early March, China cut its goal for economic expansion, while a report Thursday showed U.S. growth cooled more than forecast.

"It's hard to make the case that, overall, commodities can stay in this uptrend," said Rob Haworth, senior investment strategist at U.S. Bank Wealth Management in Seattle, which oversees $164 billion. "Grains will have a tough time, and for industrial metals the underlying question is: what really is going on with China's growth?'

Oil closed above $60 for the first time since early November -- capping its best quarter since 2009 -- after signs of thinning supplies from Siberia to the U.S. shale fields.

Information for this article was contributed by Alex Veiga of The Associated Press; and by Rita Nazareth, Vildana Hajric, Marvin G. Perez and Justina Vasquez of Bloomberg News.