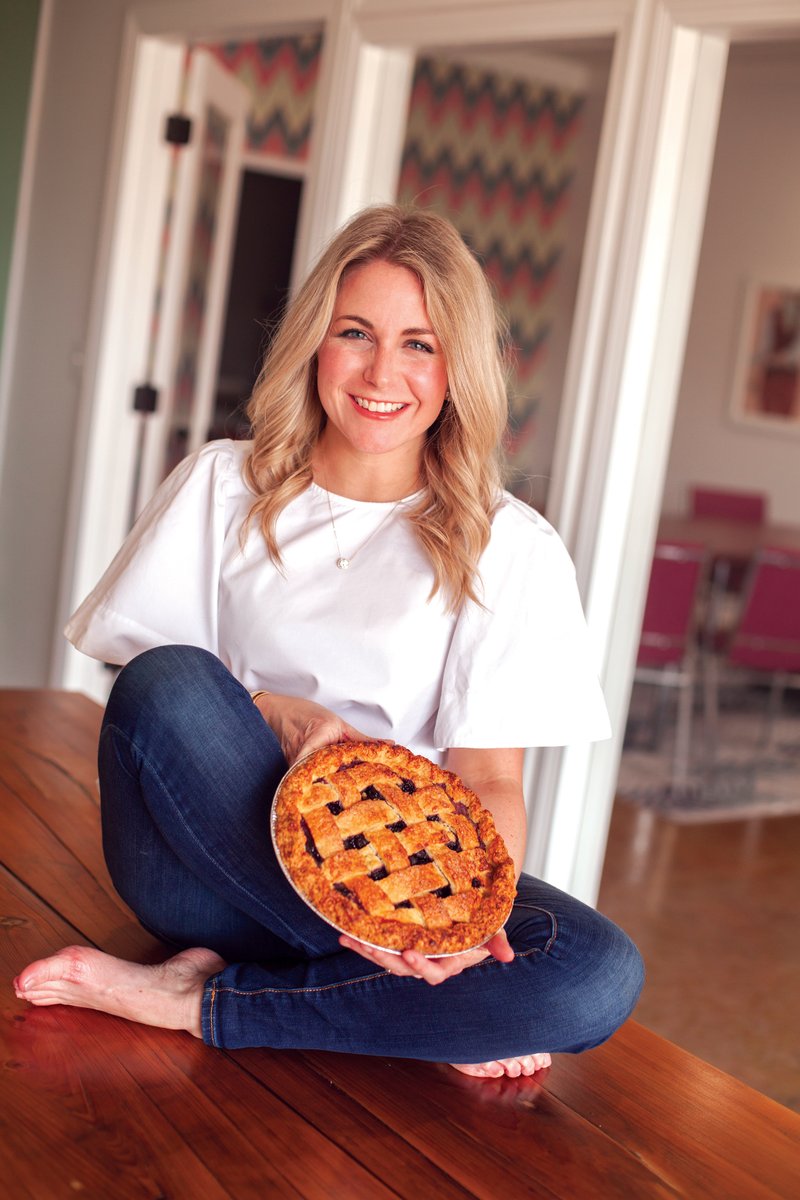 Graycen Bigger, executive director of the Spring River Innovation Hub in Cherokee Village, holds a blueberry pie from Chow on the Square in Cherokee Village. The hub is hosting the first Arkansas Pie Festival on April 20 in the town square. The inaugural festival will feature a contest for the best pies, a pie-eating contest, music, food trucks and more. Chow on the Square is competing in the commercial-baker category. Other categories are noncommercial and student, which is for those 18 and younger. More information is available at arkansaspiefestival.com.

Concocting an idea for a new festival in Cherokee Village was as easy as … pie.

The first Arkansas Pie Festival is scheduled to begin at 10 a.m. April 20 in the Cherokee Village Town Center. The event will include a pie competition with three categories, samples of those sweet or savory slices of Americana, music, food trucks and more.

“It’s a very nostalgic food in the South,” she said of pie. “We started looking around at food festivals because we know people love to gather around food. … It’s a community thing. We realized Arkansas did not have a pie festival.”

Bigger said the proceeds will be used for the STEAM (science, technology, engineering, arts and mathematics)-programming piece of the hub. The innovation hub opened in 2018 and focuses on Sharp, Fulton and Izard counties.

“The idea is about supporting small business and entrepreneurship and innovation and creative ideas, and part of that is thinking of the next generation and the youth of our area,” Bigger said.

She gave credit for the Pie Festival idea to Jonathan Rhodes of Cherokee Village, chairman of the innovation-hub board. He said it was a collaborative effort.

“The reality is, a college friend of mine, we were brainstorming one day about things in the village, and I had said, ‘We really want to create a signature festival here.’ He actually had the idea. Kat Robinson had released her [second] book on pie, and the AETN (Arkansas Educational Television Network) documentary based on her book came out.”

Rhodes said there are festivals devoted to food in the state, such as watermelon, but there isn’t one featuring pie.

Rhodes called Robinson, who lives in Little Rock, and told her the idea to throw a pie festival.

“I told her, ‘You’re the queen of pie, and we’d love to team up with you,’” Rhodes said. “She was excited from the beginning.”

Robinson is a food historian, travel writer and author of five books, two of which are about pie: Arkansas Pie: A Delicious Slice of the Natural State and Another Slice of Arkansas Pie. She will hold a book-signing during the festival, too.

Robinson, one of the creators of the original Arkansas Cornbread Festival, said it was about time for a festival featuring pies.

“This is something that should happen,” she said. “It’s one of those foods; it’s our common denominator here in Arkansas. You find it in every corner of the state.”

Bigger said Robinson will be the head judge “because she knows pie better than anyone.”

Other judges include Rex Nelson, senior editor at the Arkansas Democrat-Gazette.

Judges will give awards for their favorite pies, and there will be a People’s Choice Award, too. Tickets are $9 for adults to partake of pie samples and vote; $5 for children ages 5-12; and free for children younger than 5.

Bigger said 20 slots exist for bakeries or restaurants to enter. Samples of those pies will be available for the public.

A “home-chef” category is available, too, for “anybody who loves pie or has a family recipe,” she said. Those contestants are required to bring two pies, one for display and one for the judges. The uncut pies will be sold in a silent auction.

Bakers younger than 18 have their own category.

She said slots for commercial bakers are still available; there is no limit on home chefs or those younger than 18. Registration and tickets are available online at arkansaspiefestival.com.

Rhodes said prizes will be given for a mixture of categories, such as Best Chocolate Pie, Best Fried Pie, Best Meringue, Best Savory Pie, and the list goes on.

In addition to the pie contests, beginning at 10 a.m., attendees can experience hands-on technology at the STEAM Roller, a hands-on mobile makerspace sponsored by the Arkansas Regional Innovation Hub in Little Rock.

For people whose talent is more in the realm of eating than baking, a pie-eating contest is scheduled for 1 p.m. And no pie festival would be complete without a pie-throwing event, set for 2 p.m.

Robinson will hold her book-signing from 2-3 p.m. inside the pie pop-up shop, which will have merchandise for sale. The pie silent auction will end at 3:30 p.m., and winners will be announced. The festival is scheduled to end at 4 p.m.

Robinson said the third weekend in April is going to be reserved each year for the festival.

“This is something we expect to take hold,” she said, and expand to attract people from other regions.

Bigger said she and her husband, who does a lot of cooking for the couple, are going to make a pie together.

“He has a recipe from his grandmother, a bourbon pecan pie,” she said.

Molly Carpenter, treasurer of the Spring River Innovation Hub Board of Directors, said she plans to enter the pie contest, too.

She said her grandmother, Norma Gammill of Cave City, is going to teach her a “top-secret” recipe, and they are both going to enter the contest.

“She is our pie-making queen in our family,” Carpenter said. “We were talking about it, and no one knows how to make her pie. It’s a chocolate meringue pie. I think it’s a pretty simple pie. I’m going to go down and visit with her, and she is going to show me how to make it. She said it’s all in her head; she doesn’t have it written down.”

Although Rhodes has his hands in a lot of the festival planning, he won’t be baking a pie.

“Oh, gosh. Well, the problem is, I keep tasting new ones, so it’s changing,” Rhodes said. “I always go back to the peanut-butter pie. Lately, I’ve had a taste for blueberry pie.”

“When you think about home, grandma and family and holiday occasions, [pie is] something that hits every household and every income level. We’re so excited to bring people together around something that’s so universal,” Rhodes said.

People are encouraged to show up to “grab a slice of The Natural State,” as it says on the flyer.

“We hope we have a big crowd,” Bigger said.

Organizers expect the Arkansas Pie Festival to be successful.

As Robinson put it, “you can’t go wrong with pie.”