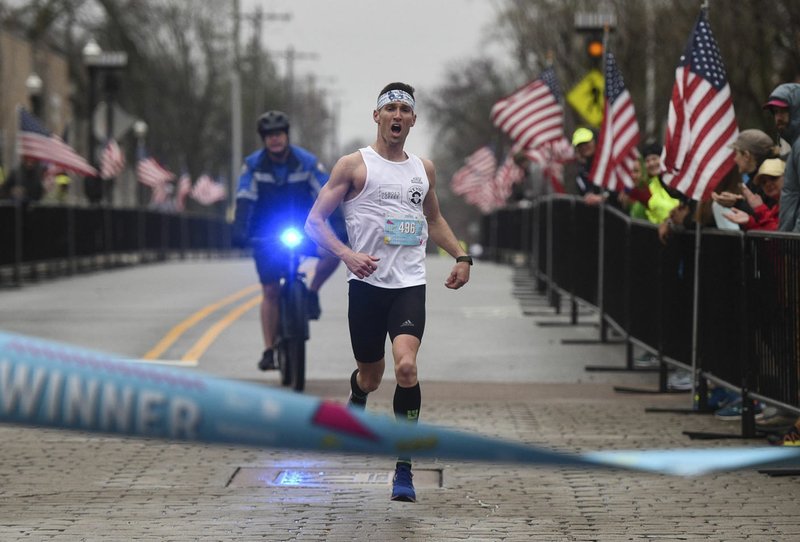 BENTONVILLE -- Derek Yorek crossed the finish line Saturday morning and yelled out a loud, satisfying "YES!" before he dropped to the ground and laid there for a while.

A couple of race volunteers tried to help him up, but Yorek couldn't be bothered as he stared up at the overcast sky with a telling smile on his face.

For the third time in four years, the 35-year-old Bentonville resident had won the Bentonville Half Marathon, which started and ended at the town square.

"Right now I'm not running a lot of races, but I always come back for this race," Yorek said. "This is my race, a hometown race. I wouldn't celebrate until I got into the finish line, but there's no greater feeling on earth."

Yorek's time of 1 hour, 11 minutes, 44 seconds was more than two minutes faster than the second-place finisher, and it was also a course record. He said a mixture of running, Cossfit and military-based training helped him get into shape.

"I didn't feel like I was OK until maybe (mile) five or six," Yorek said. "Being local, from here, they know your name. It's everybody yelling, everybody's out in a good mood in this horrible weather, so there's not another feeling like it."

Early morning storms threatened to force significant delays, but the race was only postponed a half-hour until 7:30 a.m. The accompanying rain caused most of the course to turn slick, and several runners slipped and fell as a result. Erin Edminister, the half marathon's female victor, fell on the fourth mile but recovered to win despite a gashed and bloody right forearm.

"I just lost my footing because it was wet, and I just slipped," Edminister said. "My goal is always to win. I wanted to break the course record, which was a 1:21:30-something, and I got that, so I'm really, really happy."

Edminister's 1:19:52 chip time allowed her to win with ease despite the fall, and the 29-year-old Bentonville-based development director credited a fellow runner's encouragement as the catalyst for her race-saving recovery.

"I was running in a group of four, and the two guys took off, but (one) turned around and was like, 'Are you OK?'" Edminister said. "He helped me catch up. It's just kind of teamwork at its best."

Zan Johnson, 21, finished first in the 5K race with a 16:58 mark. He beat the second-place contestant by nearly 38 seconds.

"Running's my biggest passion; that's the thing I do," Johnson said. "I was pretty worried this morning waking up and driving through the pouring rain, but it cleared out pretty nice. It was a little wet, but it didn't worry me at all."

The UA junior engineering major said the pack stayed together for the first mile, but once the second mile came around, he turned on the jets.

"It's the greatest feeling," Johnson said. "It's just knowing that all this work I'm doing, all those runs I'm doing in the morning, all those speed workouts where I'm just killing myself, they're working out."

In its ninth year, Run Bentonville has grown into one of the premier half-marathon and 5K events in the state. With 12 aid stations and more volunteers than typical, similar fixtures, runners were accommodated as though they were competing in a nationally recognized race.

"I'd say it's a big-city race but with a small-town charm," said David Wright, Bentonville's Parks and Recreation Director. "That's what's really inviting about us. We have runners here from as far as Clearwater, Florida, and Seattle, Washington."

Of the runners who competed, the majority were from Arkansas, but 35 states were represented, Wright said.