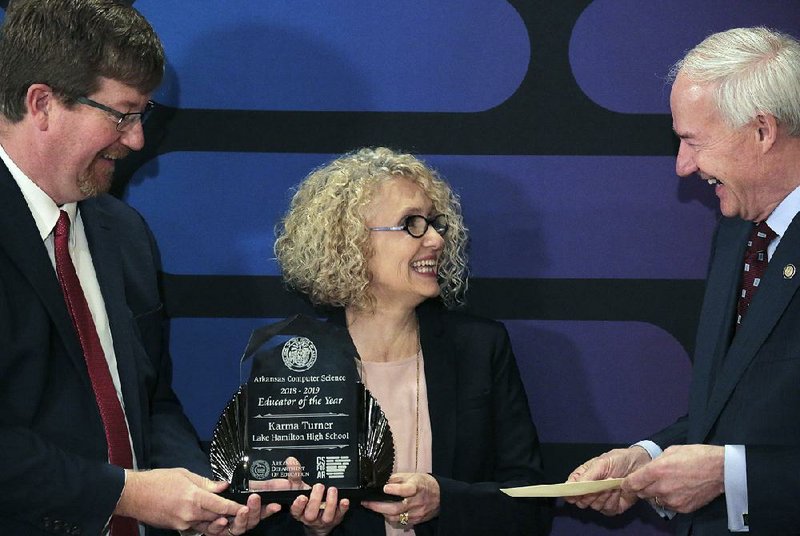 The 24-year educator switched from teaching math to computer science in 2016 after the governor began implementing his initiative to expand that type of education in Arkansas. The switch, Turner said, has rejuvenated her passion for teaching.

"Math was a requirement, and you'd have one or two kids that were really into math," Turner said. "But with computer science, kids are taking it because they want to take it. They're excited about it."

Expanding computer science education in Arkansas' public schools was a major campaign promise Hutchinson made before being elected for his first term in 2014.

The Republican governor pushed for legislation in 2015 that requires all public high schools to offer at least one "high-level" computer science class. The number of students in the state taking those classes has increased from 1,104 in 2014-15 to more than 8,000 enrolled this school year.

"In every environment, it's the teachers that make the difference," Hutchinson said Thursday.

Hutchinson spent the week speaking with students at schools across the state about computer science. His final stop at Jacksonville High School on Thursday afternoon had to be postponed because of stormy weather.

Turner was one of five teacher named finalists for the award. The others were:

• Carl Frank, Arkansas School for Mathematics, Sciences and the Arts.

"Everyone of these candidates were well deserving of this award, and it was a hard choice," Owen said.

Hutchinson has heralded Arkansas as a leader in computer science education. It was the first state to require high schools to offer such a class, and it was the first to create the full-time position that Owen occupies (13 other states have since followed suit).

Turner said that about half her computer science students plan to pursue an education or career in that field, but even for those who don't, the skills they learn in class are valuable.

"It's something that ekes its way into every field of study," she said.

Earlier this year, West Virginia passed legislation to make it the first state to require a computer-science credit for graduation. Turner said she sees benefits to such a requirement in Arkansas.

State Education Commissioner Johnny Key congratulated each of the five teachers chosen as finalists for the award. He credited teachers like them for Arkansas' progress in the education of that subject.

"Today, we express appreciation for those educators who have really gone above and beyond to meet classroom demands in this great field that Arkansas is leading the nation in," Key said.