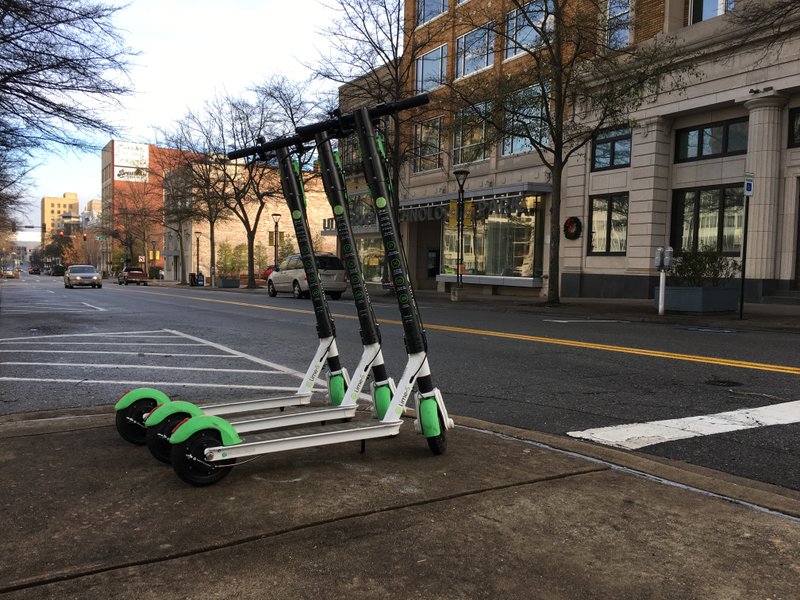 Little Rock will extend its contract with electric-scooter provider Lime for an additional 120 days, despite the safety concerns city officials expressed to the company earlier this year.

A six-month pilot program that dropped the dockless devices on downtown street corners in January was set to end May 15. Now, residents and visitors will be able to roll around Little Rock on the bright green scooters through mid-September.

Stephanie Jackson, communications director for Mayor Frank Scott Jr., said the city is extending the contract as it prepares to issue a request for qualifications for a scooter provider that will have a long-term presence in the city.

City Attorney Tom Carpenter said no terms of the original memorandum of understanding with Lime were changed; the city just requested to add 120 days from the previous end date.

"We appreciate the city extending the program and look forward to continue serving the residents and visitors of Little Rock and providing a greener, more affordable way to get around their community," an emailed statement from Lime reads.

Carpenter said the city has a "good working relationship" with Lime. He said Thursday that he hopes to complete soon an ordinance regulating the devices' use.

Little Rock's ordinance would allow scooters to be ridden on the streets in the central business district and on sidewalks in some residential areas, Carpenter said. Currently, city code requires that the devices stay on the sidewalks, though they're allowed on the streets in most cities.

Lime's introduction in Little Rock saw some confusion and complaints. The mobile app used to operate the scooters initially told users to ride on the streets, though it's since been updated.

"The technology is moving faster than our policies," Dr. Joe Thompson, president and CEO of the Arkansas Center for Health Improvement, said in an interview Thursday.

Thompson said that riders should follow any regulations, but said both street and sidewalk riding pose potential risks. Riders buzz past pedestrians on sidewalks and compete for space with cars on the street. For safer riding, Thompson recommended requiring helmet use and strongly advised that parents keep their children off the devices.

"This is equal to putting your kid on a motorcycle," he said.

On Jan. 29, a letter signed by Carpenter and addressed to the CEO of Neutron Holdings Inc., which operates Lime scooters, stated that the city would not pursue a superseding contract after May 15.

An Arkansas Freedom of Information Act request for the city's communications with Lime regarding the extension had not been fulfilled by late Thursday.

Despite many people's enjoyment of the scooters, the letter said, city officials were "disappointed in Lime's lack of attention to the safety of its riders and pedestrians."

Lime has made some changes to the devices in Little Rock since they arrived. The maximum speed was lowered from 18 mph to about 15, and the mobile app now requires users to scan driver's licenses to prove that they're over 18.

The Centers for Disease Control and Prevention is investigating a spike in injuries related to the use of electric scooters, though the amount of local injuries is difficult to track. Numbers were not immediately available from hospitals on Thursday, and at least one -- Baptist Health Medical Center -- said it tracks scooter injuries in the same category as motorcycle injuries.

Thompson said it wouldn't surprise him if Little Rock had seen a spike in injuries. He referred to a study from Austin, Texas, by the Austin Public Health Department released Thursday. The study of 190 injured riders showed that nearly half had severe injuries, and 15 percent had evidence suggestive of traumatic brain injury.

"They're exciting to ride, but they're not risk-free," he said.