Group to get bill for blaze at dump 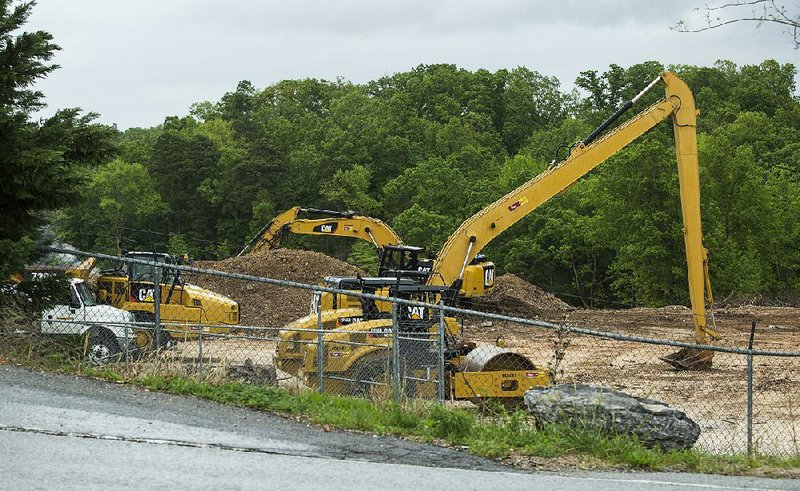 Construction equipment sits Friday at the site of the stump-dump fire in Bella Vista.

BELLA VISTA -- The Bella Vista Property Owners Association will take over responsibility for paying to extinguish and clean up an underground fire at a former stump dump, the Arkansas Department of Environmental Quality announced Friday.

The department will maintain inspection duties and provide oversight at the fire, a news release said.

The association operated the dump on leased land from December 2003 to Dec. 31, 2016, when it was covered with soil, Tom Judson, the association's chief operating officer, has said.

Nobody monitored the site for the last few years it was open, but workers would remove trash when possible, Judson has said. The property is now owned by Brown's Tree Care.

"My focus is still on getting the fire out," Bella Vista Mayor Peter Christie said. "I don't care who does it. The focus was on [the state agency], now the focus is on the [property owners association]. Let's get the fire out, get the bad stuff out of there and get it back to the way it was."

State officials urged residents near the fire in December to avoid prolonged or heavy exertion outdoors after a reading found unhealthy air in the area. The state continues to caution people living within a half-mile radius of the blaze, although recent testing has shown air quality mostly in the "good" range.

The state agency told the property owners association in January that it may be held partially responsible for the fire and may have to contribute financially to putting it out and cleaning up the site, the release stated. The association has provided services and amenities to Bella Vista since Cooper Communities Inc. developed the area in the 1960s. The community voted to incorporate in 2006.

The General Assembly passed a $20 million appropriation in the 2019 legislative session to put out the fire and clean up the site. With the property owners association assuming responsibility for the site from the state, the appropriation may no longer be needed, which will result in a reduced cost to the state, the release stated.

The cost for the work could be between $21 million and $39 million, according to state estimates.

Donnally Davis with the Environmental Quality Department said Friday that the state had spent about $750,000 at the site, and the property owners association is one of a number of parties from which the agency will try to get money.

The association will employ three companies to put the fire out. ERM is a global company that will provide engineering on the project, the association's release stated. The company has extensive experience in all aspects of environmental planning and compliance.

Under the state's plan to put out the fire, the Environmental Quality Department called for containing the fire and then excavating the site, Stuart Spencer, associate director of air quality with the department, said in April.

The plan was looked at for its viability, the timeline to get the work done, the cost, further effects on residents and whether it was environmentally sound, he said. Most of the waste in the landfill is expected to be wood, according to the department's statement.

Spencer gave a 30-minute slide presentation on April 18 to show the agency's plan for containing the fire and then excavating the site. His timeline was 180 days.

Environmental Quality Department Director Becky Keogh said in the release that the plan calls for the fire to be out within 30 days after the property owners association's contractor starts work.

"ADEQ and coordinating state agencies will work to assure continued protection to public health and the environment," she said in the release.

Judson said the association's goal is to find the fastest, most effective way to get the fire out.

"We wanted to have direct control over the final phase to ensure the money we invest is well spent," he said.

Particulate matter air monitoring showed air quality index readings mostly in the "good" range for testing done April 17-24, according to the Environmental Quality Department. Testing sites are at Fire Station No. 2 and near Cooper Elementary School. There was one "moderate" reading April 20 at the fire station.

Particulate matter monitoring measures the amount of solid and liquid droplets found in the air, such as ash, dust and smoke. The amount provides a snapshot of air quality and how it might affect health, the state Department of Health says.

Two lawsuits have been filed over the fire.

A family living near the fire filed a lawsuit against Cooper Communities Inc., the Bella Vista Property Owners Association, Blue Mountain Storage and Brown's Tree Service. Curtis and Tiffany Macomber claim that continued smoke from the site has created a hazardous situation for the Macombers and their children.

Bella Vista resident Jim Parsons filed a lawsuit against Cooper Communities, the property owners association, Tom Fredericks, who owned Blue Mountain Storage, and the Environmental Quality Department. Benton County Circuit Judge John Scott dismissed Cooper and the association from the lawsuit last month after Parsons failed to present any facts to support his claims, according to the judge.

Parsons filed a motion to dismiss his lawsuit against the state agency, which Scott granted in an order Wednesday.

Print Headline: Group to get bill for blaze at dump