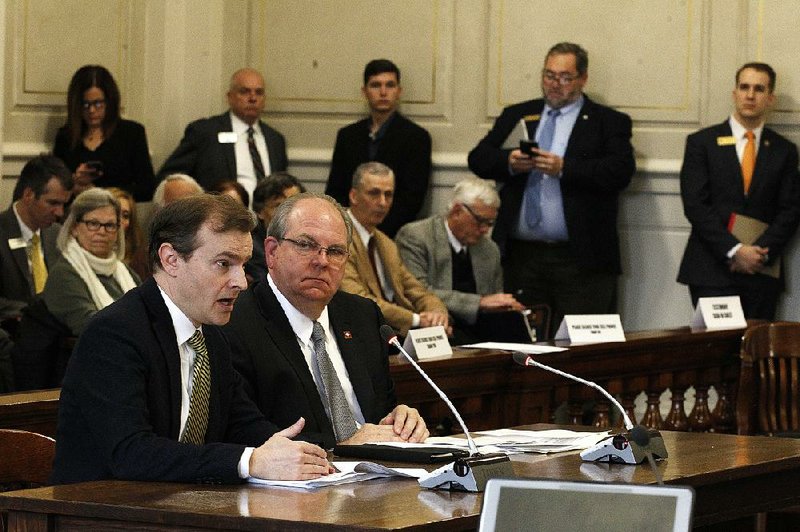 Paul Gehring (left) of the state Department of Finance and Administration discusses the highway funding bill Wednesday in the Senate Revenue and Taxation Committee. Sitting with Gehring is Sen. Terry Rice, sponsor of the bill. ( Arkansas Democrat-Gazette / Thomas Metthe)

Seventeen of 23 state lawmakers who signed an anti-tax-increase pledge voted for a bill enacted this year that will levy new taxes to help raise money for highways and roads.

Some of the lawmakers disagree about whether their vote for the bill violated their pledge to Americans for Tax Reform, a Washington, D.C., group founded by Grover Norquist in 1985.

One lawmaker said he wouldn't vote for the bill again if he had it to do over.

State officials project that Act 416 will raise about $95 million a year for the Transportation Department and about $13 million a year more apiece for cities and counties.

The new law is one part of Gov. Asa Hutchinson's two-pronged plan to raise $300 million a year more for highways and $114 million more a year for city and county roads.

Eleven of the 23 lawmakers who signed the pledge also voted to refer to voters in the 2020 general election a proposed constitutional amendment that would make permanent the state's half-percent sales tax for highways. That tax originally was approved by voters in 2012 for a 10-year period. The proposed amendment is in House Joint Resolution 1018 by Rep. Jeff Wardlaw, R-Hermitage. It's the second part of Hutchinson's highway plan.

Arkansas lawmakers approved the highway measures in this year's regular legislative session, in which the Republican-dominated Legislature passed bills phasing in reductions in the state's top individual income tax and corporate income tax rates; increasing the homestead property tax credit from $350 to $375 per parcel; and requiring out-of-state sellers without physical presences in the state to collect sales and use taxes on their sales to in-state purchasers.

So far in 2019, Arkansas along with Alabama, Ohio and Virginia, have enacted gas tax increases, although Virginia's applies only to a portion of the state, according to the National Conference of State Legislatures.

Since 2013, 31 states and the District of Columbia have enacted legislation that will increase or may increase overall state gas taxes, the National Conference of State Legislatures reported on its website. In 2018, Missouri voters rejected that state's legislation to increase the motor fuels tax, resulting in 30 of the 31 states implementing these increases since 2013.

In a recent interview, Rice said he sponsored and voted for SB336 because the voters in his Senate district and across the state told him they want their highways repaired.

"Highways are not a new thing for me and, since the roads in my district deteriorated, I have heard from a lot of people." He said that for three years he's been urging Hutchinson to develop a highway plan backed by a broad coalition, and "it was either put up or shut up" when he was presented with this bill, "and I stepped up and I ran the bill."

He said that at the urging of a campaign consultant, he signed a pledge with Americans for Tax Reform in 2014 to oppose and vote against any efforts to increase taxes.

"I wouldn't do it again," Rice said, adding that he doesn't consider it "a lifetime pledge."

According to the Americans for Tax Reform's website, "Pledge signers are bound for the duration of their tenure in the office to which they were elected, with the exception of constitutional officers who are next in line for the governorship.

"For example, if a Pledge signer runs for the state house of representatives, wins the election and two years later decides to run for the state senate, he/she must sign the Pledge again for it to apply to his/her tenure in the Senate. However, if a Pledge signing lieutenant governor or other officer succeeds to the governor's office, the pledge remains in effect," according to the group's website.

(Republican Lt. Gov. Tim Griffin signed the group's no-tax-increase pledge, but he votes in the Arkansas Senate only if there is a tie.)

"If they want to recall me, they can recall me," Rice said. (State officials said there is no recall provision for state lawmakers in state law.)

In the 2018 election, Rice was unopposed in his bid for a second four-year term. Rice defeated Republican Sen. Bruce Holland of Greenwood in the 2014 election; Holland also had signed the Americans for Tax Reform's pledge.

Rep. Mike Holcomb, R-Pine Bluff, was the House sponsor of SB336 and voted for it; he also had signed the pledge. He could not be reached for comment by telephone last week.

The Senate voted 27-8 to approve SB336; the House vote was 71-26 after that chamber amended it to remove Rep. Brandt Smith, R-Jonesboro, as a co-sponsor. The Senate concurred with the House amendment and then voted 25-8 to send the bill the governor.

Rice said he voted for HJR1018 -- on the proposed amendment to make permanent the half-cent sales tax -- because "I never had a problem with referring something to the people.

"Highways is something I have been pushing for a long time," he said.

Senate Republican leader Bart Hester of Cave Spring said he voted against both highway measures because he signed the no-tax-increase pledge.

"I think the pledge is clear," he said.

Hester said he was surprised that 17 lawmakers who also signed the pledge voted for SB336, "but if I have learned anything in politics, being surprised is the norm."

He noted that some of his colleagues interpreted their pledge to mean their votes for bills should collectively reduce net state tax revenue during their tenures in the Legislature.

A spokesman for Americans for Tax Reform could not be reached by telephone or email last week for this story.

Senate Republican Whip Scott Flippo of Mountain Home said his vote for SB336 "was a difficult vote. But I do think the people in our state want our highways to be addressed and our roads to be better."

As to whether he violated his pledge, which he signed in 2014, by voting for SB336, Flippo said, "I think that's in the eye of the beholder. I can see how people would feel that it would."

But Flippo said he didn't vote for HJR1018 because "I just did not agree with that process.

"I did not agree with extending something that already had a sunset clause there," he said. "I would not be surprised if it passes the state overall. It passed the first time [in 2012]. I think there is plenty of desire to see improvements in our state's roads."

Sen. Gary Stubblefield, R-Branch, said he signed the no-tax-increase pledge several years ago, and many things have changed since then. He said he doesn't believe he violated his pledge.

"I knew what type of condition these roads were in and had a lot of complaints from constituents," Stubblefield said in explaining his vote for SB336.

"We went out on a limb and put our necks out to be chopped off to get some decent highways. We cannot have any kind of economy without roads and infrastructure," Stubblefield said.

He said he voted against HJR1018 because he wanted "to let people see some results from this initial tax increase." He said he would possibly vote in the future to refer the half-cent proposal to the voters in the 2022 election, instead of the 2020 election.

Freshman Rep. Harlan Breaux, R-Holiday Island, said he voted for SB336 because "I thought it was the only thing we could do at the time" to improve highways.

Asked if he violated his pledge with Americans for Tax Reform, Breaux replied, "Yes, for sure. I did that.

"Looking back on it, if I had to do it over again, I wouldn't do it," Breaux said.

He said he voted against HJR1018, on referring to voters the half-cent sales tax because "I guess I learned my lesson by then. I already had voted for one tax and then realized I shouldn't have voted for a tax at all."

Rep. Charlene Fite, R-Van Buren, said she voted for both highway measures because she has been contacted by many of her constituents with stories about damage to their cars and accidents resulting from the poor condition of highways.

Rep. Mary Bentley, R-Perryville, who has served in the House since 2015, said she signed the no-tax-increase pledge during her first year in office.

But Bentley said she voted for SB336 because "I am here to represent the majority of my district, and I feel that's what they wanted. ... It is more important to do what my constituents wanted."

She said she voted against HJR1018.

Bentley noted that the Legislature authorized a thorough study of the Transportation Department. Act 298 (Senate Bill 385 by Sen. Jonathan Dismang, R-Searcy) will require the Legislative Council or its executive subcommittee to hire one or more consultants to help conduct the study.

The aim of the study is to recommend legislation to the General Assembly to maximize the use of taxpayer dollars; improve the efficiency and overall functioning of the department; and ensure the department's responsiveness to the needs of the state and its people, according to Act 298.

Act 298 also requires the state's Internal Audit Section to conduct an annual project review and efficiency study of the department.

Rep. Lane Jean, R-Magnolia, said he voted for SB336 because roads and bridges need to be improved in his House district, and the Legislature hadn't voted to increase the gas and diesel tax in 20 years.

"I justified that because I voted for the $97 million [individual income tax] reduction in the governor's plan," said Jean, who added that he signed the tax pledge in 2010. "I haven't caught flak back home about it."

Jean said he voted against HJR1018, the half-cent sales tax extension, because "I was there when we said it would be a temporary tax."

He said he preferred asking voters to renew the half-cent sales tax on highways for another 10 years, rather than making it permanent.

Smith, who is the House Republican whip, said he signed the no-tax-increase pledge during his first term in office.

"Yes, I violated that pledge," he said of his vote for SB336. "I feel like our highways and bridges were in such disrepair we had to do something."

"That was a hard vote. I was willing to do it to see our infrastructure brought up to speed. We are not talking new construction. We are talking about maintenance issues."

Smith said he also voted to refer to voters the proposed constitutional amendment to permanently extend the half-cent sales tax for highways because "I just felt it was the right thing to do."

Jon Gilmore, president of Gilmore Strategy Group, is a former deputy chief of staff to Hutchinson and is Hutchinson's chief political strategist. Gilmore said his polling showed that a majority of voters supported both highway measures and that's "quite frankly astounding" in this conservative state.

"Voters want to see tangible results for their tax dollars and, if they know this will be spent on something that they can see and drive on, they support it," Gilmore said. 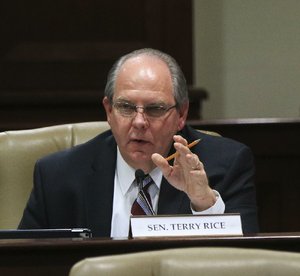 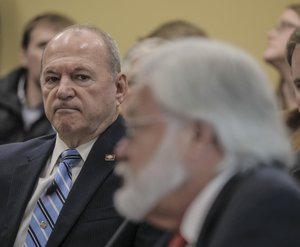 Photo by John Sykes Jr.
In this file photo Rep. Mike Holcomb, R-Pine Bluff, left, listens as Little Rock attorney Bruce McMath, right, foreground, speaks during a meeting of the House Committee on Revenue and Taxation at the state capitol in Little Rock. 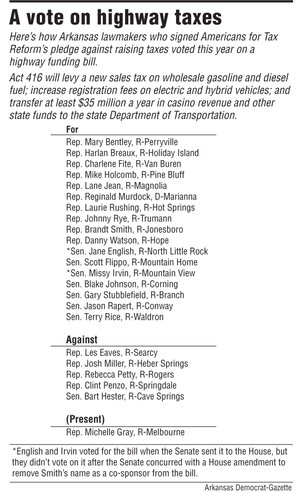 Photo by Nikki Dawes
A vote on highway taxes