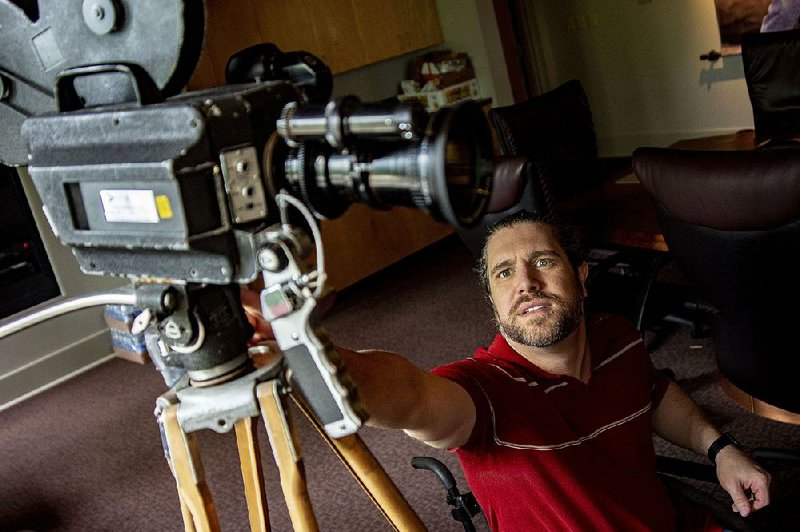 Josh Miller is a volunteer with the Arkansas Cinema Society Filmmaking Lab for Teen Girls. The eight-week lab is providing a dozen 16-18-year-old girls from 11 central Arkansas high schools a chance to make a short film.

Josh Miller learned as he went along while making Pillow, which went on to win several festival awards after its release in 2010.

He shares his knowledge as a volunteer with the Arkansas Cinema Society Filmmaking Lab for Teen Girls, a partnership between the Cinema Society, the Women's Foundation of Arkansas Girls of Promise Initiative and JM Associates, a Little Rock video production company. The lab is set up to help aspiring filmmakers get their start, even before high school graduation.

The eight-week lab, which began March 26, is providing a dozen 16- to 18-year-old girls from 11 central Arkansas high schools a chance to get hands-on experience, starting with writing a story.

"When this lab is done, they should know how to write a story, story structure, directing and cinematography," Miller says.

Miller was interested in filmmaking before he graduated from Bryant High School in 1996, but he didn't really know how to start.

"I loved film, but being a filmmaker never was really realistic," he says. "Even with them making Sling Blade in Benton, you know, a couple years before I graduated or, you know, couple of other smaller movies around the state, it still never really felt real, like that could be a real thing."

Miller took a couple of acting classes at the University of Arkansas at Little Rock after high school, and he moved to Los Angeles when he was 21.

"I thought I was going to try to act but I realized quickly that I wasn't an actor," he says.

He returned to Bryant after just six months, and around 2005 he began writing screenplays and making films with his brother, Miles Miller.

The Miller brothers asked Kathryn Tucker, executive director and founder of the Arkansas Cinema Society, to produce All the Birds Have Flown South -- and Tucker asked Josh Miller to be a mentor to the girls in the film lab. He was happy to comply.

"I think just with a substantial shortage of diversity in the industry it's really exciting to see them doing a lab for young women," he says. "I think that offering guidance and encouragement at that age is vital in transforming an industry that definitely has a long-standing history of not offering the same opportunities for women as it does men. I was excited that they asked me to be a part of it."

The 12 girls have been split into two groups, and each group collaborated to write a story that focuses on female empowerment. They will shoot and edit their screenplays using facilities and gear provided to them by JM Associates.

"It's a two-day shoot and each one of them gets to do two different jobs, whether it be directing, producing or being a cinematographer. Assistant director is another job," Miller says. "So they'll get a little bit of experience on two different jobs. But as a class, they develop the story together. They wrote the story themselves. And now they're going to make a short film, as well as edit it and include music. So at the end of it, they will have made a completed short film."

Their films will be featured at future Arkansas Cinema Society events, including Filmland 2019, set for Aug. 22-25.

No filmmaking experience was required to apply for the lab, but Miller sees big potential among the group.

"There are definitely artists in the group, you can tell," he says. "I don't know about filmmaking specifically, but I know that there are photographers in the group, and it certainly appears that there is some writing experience in there."

He didn't have a mentor of his own.

"There's nobody that stands out as being like the person that sort of took me under their wing and taught me about the industry. It took a lot of years to learn. And if I would have had that one person, I feel like I could have compressed that time a little bit," he says. "I do it because it's so rewarding. ... It's really fun to see them learn and to grow."

To find out about more educational opportunities through the Arkansas Cinema Society, or to volunteer go to www.arkansascinemasociety.org/year-round-programming#educational. 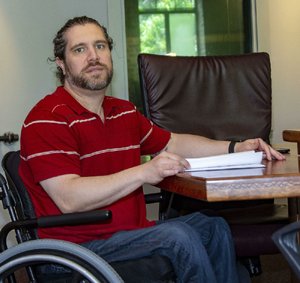 Photo by Arkansas Democrat-Gazette/CARY JENKINS
Filmmaker Josh Miller is working with the Arkansas Cinema Society Filmmaking Lab for Teen Girls, a partnership between the Cinema Society, the Women’s Foundation of Arkansas Girls of Promise Initiative and JM Associates.