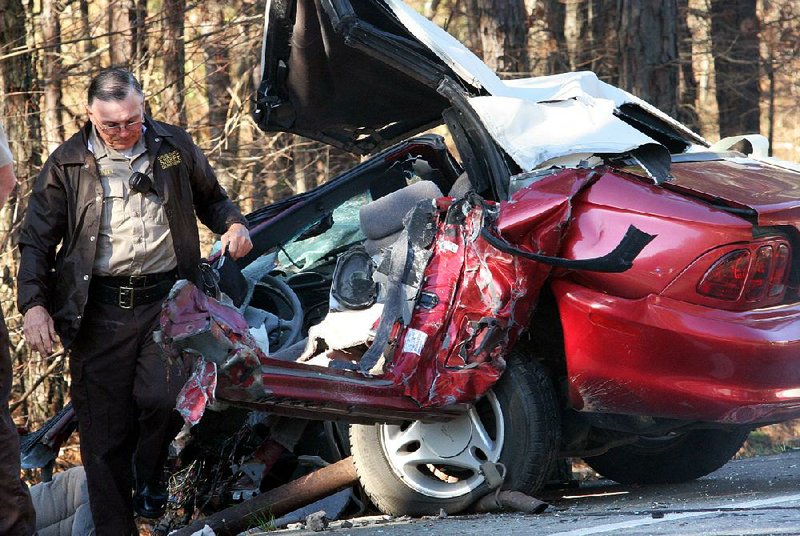 Joe Dempsey, a Garland County reserve deputy, works at the scene of a fatal accident in March 2006 near the junction of U.S. 70 and Arkansas 128 east of Hot Springs. As part of the recent U.S. 70 project, a traffic signal was installed at the dangerous intersection.

It was Dec. 4, 2015, and the then-mayor of Hot Springs was attending a convention in Rogers.

"When I opened [the door], City Attorney Brian Albright was standing there," Carney recalled. "He looked at me and said, 'I have some bad news. Your son, Chris, was killed this morning in a car accident.'"

Christopher Carney, 35, had been a passenger in his friend's SUV a few hours earlier, traveling west on U.S. 70 about 6 miles east of Hot Springs in Garland County. Arkansas State Police investigators believe the SUV's driver, Ezekiel Blanton, 37, failed to negotiate a curve about 1:40 a.m. and overcorrected. The vehicle traveled off the road and struck a tree, killing both men.

Carney's son and Blanton were among 12 people who died that year on the well-traveled highway that runs from Interstate 30 south of Benton to Hot Springs and beyond.

"We were dealing with a crisis," Carney said of the number of fatal crashes occurring on U.S. 70.

That stretch of highway and the work that has been done to improve it illustrate a balance that states like Arkansas are trying to attain of not just maintaining roads but also making them safer.

Numbers from the National Highway Traffic Safety Administration's Fatality Analysis Reporting System show that from 2013-17 there were 2,572 traffic fatalities reported in Arkansas. While that was a decrease from the previous five-year total of 2,878, Arkansas still had a higher number of traffic fatalities than states like Nevada, Kansas, Utah and Iowa, which have comparable populations.

The plan is the single-largest highway plan in the state's history. If passed by voters in 2020, the Arkansas Department of Transportation will determine the best way to use the additional funding beginning in 2024. Part of that plan will include adding safety measures to a rural highway system that's filled with roads that are often narrow and winding, while also maintaining the state's scenic reputation.

The top five counties in fatal crashes over the 2013-17 period were Pulaski, Washington, Garland, Benton and Craighead, according to Fatality Analysis Reporting System data.

Pulaski County averaged 49 fatal crashes annually during the span, while Washington and Garland counties were second with an average of 22 a year.

It's no surprise that Pulaski and Washington counties were among the leaders in fatal crashes. Pulaski County is home to Little Rock, the largest city in the state with a population of 197,780, according to U.S. Census data. Washington County is home to Fayetteville, the state's third-largest city with 81,889 people, and the University of Arkansas, Fayetteville. Both counties deal with a high number of drivers on the road.

The outlier was Garland County, the state's eighth-most-populated county, which had 109 fatal crashes during the 2013-17 period, the third-highest number of such crashes in the state.

Tourism played a substantial role in that. While Hot Springs' 36,780 population is substantially smaller than Little Rock's or Fayetteville's, the city draws visitors from across the region and even the nation. It is the home of Oaklawn Racing Casino Resort, Hot Springs National Park, the world-famous Bathhouse Row, and Magic Springs Theme and Water Park. 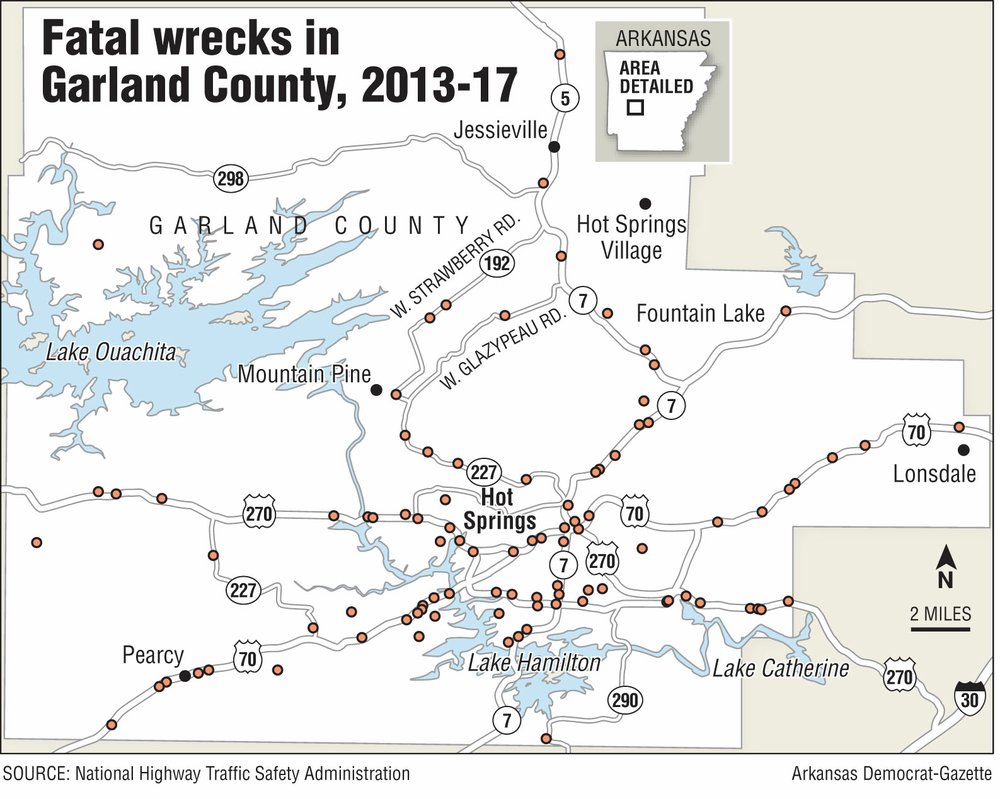 The fatal crash numbers resonate with Carney, who led an effort for additional safety measures to be made on U.S. 70.

"The fatal accidents I read about become personal," she said. "I kind of go there in my mind, and I kind of identify in my mind with whoever is having their door knocked on early in the morning. It's personal."

Often it's difficult to pinpoint the cause of a fatal crash, officials said.

"Each accident has its own uniqueness," said Bill Sadler, a spokesman for the Arkansas State Police. "We don't assume because two accidents might happen in the same area in one week that they are related. One could be because of drowsiness or the weather, and the other could be an equipment malfunction."

"Leading factors are speed, alcohol impairment and lack of attention," Rader said, noting that safety advocates prefer to use the term "crashes" instead of "accidents" because all crashes are preventable, rather than accidents that can't be helped.

Garland County officials pointed to U.S. 70 as a primary factor in the county's high number of fatal wrecks.

"There was a lot of accidents on the curves and the straightaways," Garland County Sheriff Michael McCormick said. "There was an unprecedented amount of fatalities on that road."

"The areas are scenic for a reason," he said. "The terrain wasn't meant for high speeds. The roads were kind of narrow and curvy. They weren't banked correctly, and there was high shoulders."

Rader said his group uses fatal crash data to identify strategies that can reduce the number of crashes.

"You'll see that rural states stand out with higher fatality rates because they have a larger share of dangerous, rural, two-lane highways," he said. "Fatal crashes are more likely on higher-speed rural roads, as opposed to congested, lower-speed urban streets."

In 2015, the Arkansas Department of Transportation acknowledged it was time to make changes to U.S. 70.

"We had discussed this area over and over, and then when they finally decided they would do something about this, we begged them, literally, please start on [the Garland County] end," Carney said. "They said, no, we are going to start on [the Saline County] end, which was the Benton and Bryant end.

"That kind of upset us, because we talked to them quite a bit about that crisis on this end of it." 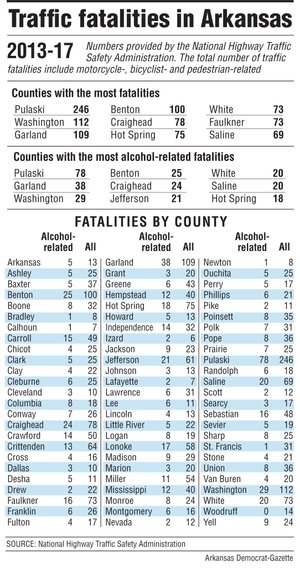 Photo by Kirk Montgomery
Information about traffic fatalities in Arkansas

Speed was among them, according to Danny Straessle, a spokesman at the Arkansas Department of Transportation.

A 2015 study showed that the speed limit on U.S. 70 was 55 mph, but traffic was traveling at 70 mph, according to the Department of Transportation.

"Everyone was leaving the track like they were race car drivers," McCabe said. "They were all juiced up from the races, and they headed back home in a hurry."

Mahoney, the county judge, said another contributing factor is that a large portion of the county's population lives outside of Hot Springs. 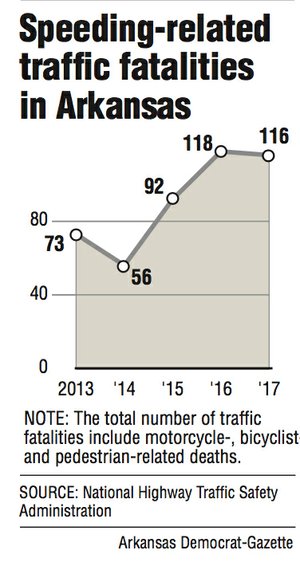 Fatality Analysis Reporting System data show that Hot Springs averaged five fatal crashes a year from 2013-17, which was higher than in such cities as Pine Bluff, Benton, Bentonville, Conway and Rogers

"We have much more traffic on our streets than [other cities] our size because of the tourism," McCabe said. "We have over 3 million visitors come to Hot Springs a year."

That was less than Pulaski County, which led the state with 78 alcohol-related fatal wrecks over the same span, but higher than Washington County (29) and Benton County (25).

Hot Springs Police Chief Jason Stachey said he conducted his own five-year study over the same period and found 32 reported fatal crashes inside the city, 12 of which involved impaired driving.

"It concerns me that our area, our community, focuses on alcohol," she said. "Another bar, another brewery, another beer festival, and nobody knows how it affects our community." 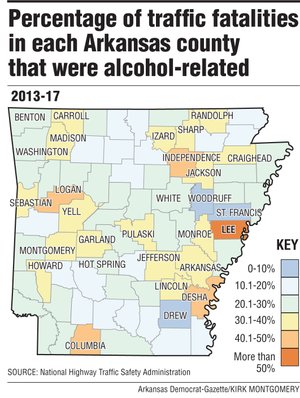 Efforts have been made over the past five years to address the problems that have contributed to Garland County's fatal crashes.

Roads have been changed, and law enforcement agencies have adjusted their policies.

In June of 2018, the state Department of Transportation completed a project to widen U.S. 70 in Garland and Saline counties.

There were 13 fatal crashes in Garland County in 2017, a 58 percent decline from the previous year's 31, according to Fatality Analysis Reporting System data. In 2018, there were 17 fatal crash reports, according to unofficial data from the Arkansas State Police.

Traffic in Garland County is expected to increase in the coming years as Oaklawn moves forward with its planned expansion and casino addition, but McCormick said the county will be ready.

"Whatever it takes, we are going to keep the roads of Garland County safe," the sheriff said.

"Road safety is everyone's responsibility -- the vehicle manufacturer, the road department, law enforcement, the driver behind the wheel," Straessle said. "More often than not, it's the driver."

Even with the changes that have been made to U.S. 70 and the increased efforts to raise awareness of road safety, Carney will never be able to forget the highway's reputation for danger.

"The curve is still there in essence," she said. "They straightened it out a little bit, but every time I drive on that road I see the tree. I never miss it.

"Every time I go by it's like, 'that is where it happened. Right there.'" 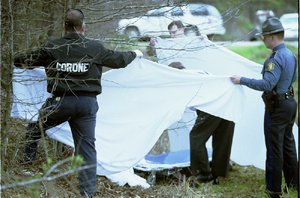 Photo by Richard Rasmussen
In this photo from March 2001, Tom Patton (left), then a deputy Garland County coroner, and state Trooper Chad Staley help at the scene of a fatal accident on U.S. 70 east of Hot Springs. Officials are using road improvements and high-visibility enforcement of speed limits, impaired-driving laws and seatbelt laws in an effort to help change the highway’s reputation for danger.