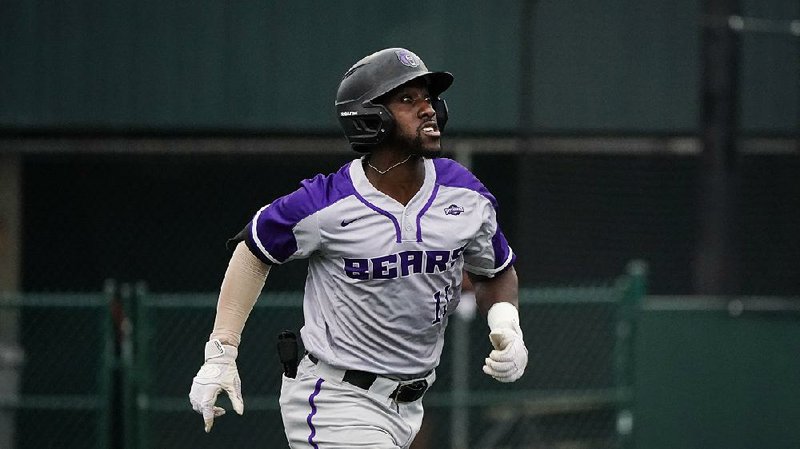 Central Arkansas second baseman Jay Anderson hit a three-run home run in the third inning of the Bears’ 5-4 victory over Incarnate Word at Sullivan Field in San Antonio. UCA split the first two games of the series after losing the first game — which was suspended Friday because of rain in the sixth inning — by a 14-6 final score.

The University of Central Arkansas (24-22, 14-9 Southland Conference) got two hits each from Alonso Bibiano and Nathaniel Sagdahl as the Bears split the first two games of their series against Incarnate Word (31-15, 14-9) at Sullivan Field in San Antonio.

Ridge Rogers hit an RBI triple down the right-field line that gave the Cardinals a 1-0 lead in the second inning, but the Bears got a three-run home run from Jay Anderson in the third to take a 3-1 lead. Bibiano hit an RBI single in the fourth inning to push the lead to 4-1, then hit a home run to left field in the seventh that gave UCA a 5-2 lead. Incarnate Word tried to mount a late rally, scoring two runs in the eighth inning on a Ryan Flores’ RBI single and a sacrifice fly from Eddy Gonzalez.

In the first game, UCA had just scored its first two runs in the sixth inning, coming on RBI singles from Beau Orlando and Joshmar Doran, when the game was suspended by rain. After scoring 6 of its 9 runs Friday on home runs, the Cardinals picked up where they left off, scoring four runs in the bottom of the sixth on a home run by Taylor Smith, a two-run double by Ryan Gonzalez and scoring a run on a wild pitch. Gonzalez added a two-run home run in the seventh inning for a 14-2 lead.

The Bears scored their ninth-inning runs on an RBI single by Josh Ragan, an RBI ground out by Cole Fiori and got two runs when Orlando reached on a fielder’s choice and advanced to second on an error by Gonzalez that allowed Ragan and Jay Anderson to score.

The Red Wolves sent 16 players to the plate in the first inning, which was highlighted by an RBI triple and two-run double by Drew Tipton, as well as a two-run single and a two-run triple from Tyler Duncan. After getting a solo home run in the third inning from Sky-Lar Culver and getting RBI singles from Jaylon Deshazier and Tipton in the fourth inning to take a 15-3 lead, Arkansas State poured in eight runs in the fifth inning. The Red Wolves sent 10 batters to the plate in the inning, with the major damage coming on a two-run double by Jake Jablonski and a two-run triple by Kyle MacDonald. Alex Howard added a three-run home run in the seventh inning, and MacDonald had an RBI sacrifice fly in the eighth.

Alexander’s home run in the second inning tied the game at 1-1, but the Jaguars took a 2-1 lead in the third inning on Bennett Shell’s RBI double down the right-field line. Christian Reyes used a bunt single to score Chase Coker in the fifth, tying the game again at 2-2 before South Alabama took control with a five-run eighth inning.

The Jaguars used RBI singles from Michael Sandle and Santi Montiel in the eighth, to go along with a throwing error that scored a run, a sacrifice fly and an RBI double from Reid Powers to claim the series victory.

Ricardo Sanchez went 2 for 3 with 1 run scored, but the University of Arkansas at Pine Bluff (6-38, 2-19 Southwestern Athletic Conference) managed just 7 hits as a team and committed 2 errors in a loss to Texas Southern (17-30, 13-10) in Houston. The Tigers jumped on the Golden Lions early, getting a two-run home run in the first inning from Christian Sanchez before scoring five runs in the third inning on two RBI singles, a sacrifice fly from Christian Sanchez and Tyson Thompson scored when UAPB centerfielder Davion White dropped a fly ball hit by Keanu Van Kuren. White made up for his error, hitting a two-run single in the fourth inning to cut the lead to 7-2, but Van Kuren hit an RBI double down the right-field line in the bottom of the inning to push the lead to 8-2. Ryan Diaz stole home for Texas Southern in the fifth inning for a 9-2 lead before Ricardo Sanchez hit a sacrifice fly in the sixth to make it 9-3. Van Kuren hit a two-run triple in the seventh inning and scored when Olajide Oloruntimilehin reached on a fielder’s choice and Oscar Ponce advanced to second on a throwing error by Ricardo Sanchez. Jordan Hollins hit an RBI double to right field in the eighh inning to set the final score.