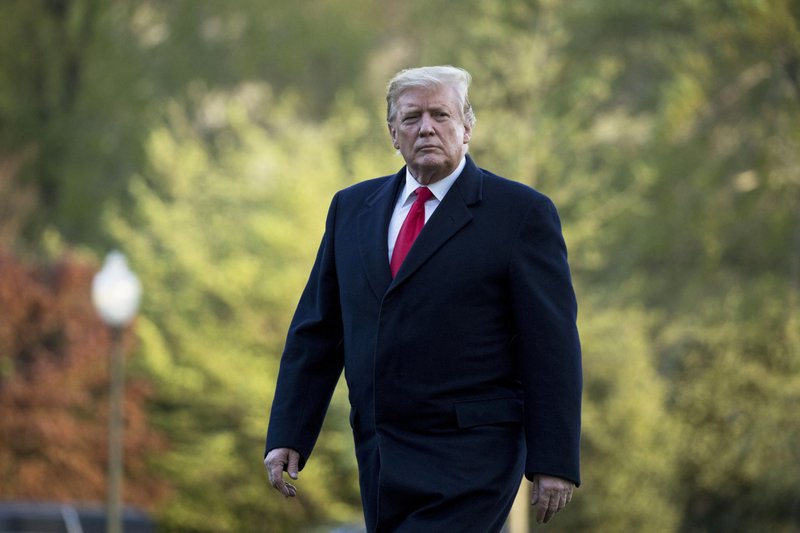 FILE - In this April 15, 2019, file photo, President Donald Trump walks on the South Lawn as he arrives at the White House in Washington. (AP Photo/Andrew Harnik, File)

The New York Republican is counting on his Christian conservative base to help him win a second term.

"I love the evangelicals. And they love me," Trump said in February, repeating a line he had also employed during the 2016 campaign.

The strength of that relationship will matter on Election Day 2020, pollsters say.

Without a fired-up white evangelical voting base, Trump's possible pathways to a second term narrow considerably, according to pollster Robert P. Jones, CEO of the Public Religion Research Institute.

"They're a quarter of all voters and they vote 80 percent Republican, so it's a very important constituency on the Republican side of politics," said Jones, the author of The End of White Christian America.

Their share of the population has been slipping, however, making high turnout at the polls all the more important for Trump, Jones noted in an interview.

"If you're a Republican strategist and you look at those numbers, you start hearing a clock ticking very loudly," he said.

With election season nearing, Trump is emphasizing his support for God and religious liberty.

The president dined with some of the nation's leading evangelicals Wednesday evening and then welcomed them to the White House for a religious service Thursday afternoon.

At a ceremony marking the annual National Day of Prayer, Southern Baptist singers led the crowd in praise and worship. And at the end, a Pentecostal televangelist thanked God for giving Trump "the victory through Christ Jesus" and commanded "every demonic network to be scattered right now."

Although there were prayers by leaders of other faith traditions, the overall atmosphere was a familiar one to Southern Evangelical Seminary President Richard Land.

"You know, this is like a revival meeting," the Southern Baptist said after the last "Amen" had been uttered.

Before departing, several other evangelical leaders in the audience expressed confidence in Trump's leadership.

"This is a community that is pro-life, pro-family, pro-religious freedom and pro-Israel," said Faith and Freedom Coalition Chairman Ralph Reed. "[Trump] promised that he would fight for every one of those things, and he has delivered and gone above and beyond the call of duty."

Like many other Republicans over the years, Trump heavily courted churchgoing social conservatives on the campaign trail, and it paid off.

Despite receiving only 34 percent of the vote among all other groups, Trump was able to claim victory. Clinton received 60 percent of that vote.

Since taking office, Trump has continued to cultivate the relationship.

As a result, the bond between Trump and evangelical leaders has strengthened.

"I think there's a mutual respect," said White House spokesman Hogan Gidley. "I think they have a good relationship because of the fact that he has delivered on the promises he made during the campaign."

Trump's evangelical advisory group, formed during the 2016 campaign, continues to offer him guidance.

As president, Trump "elevate[d] men and women of faith and integrity to the highest levels of our government," Reed said.

His administration has also barred Title X family-planning grant recipients from offering abortion referrals. The restrictions, which opponents call a "gag rule," have been blocked by federal courts.

On Thursday, the U.S. Department of Health and Human Services officially unveiled new "conscience protections provisions." The rules protect health care organizations and employees from discrimination if they refuse to pay for, perform or assist with certain medical procedures, including abortion.

"He's the most pro-life president in history, he's protecting religious liberty, overtly, like no president in my lifetime, and he has kept his promises to evangelicals," Land said.

"He made promises to evangelicals in the beginning. He's kept every one of them. And there's a lot of appreciation for that man and for his family," he said.

Other politicians had endorsed making that move, only to back off after winning office.

It's refreshing to have a leader whose words and deeds align, Land said.

"I know this may come as a surprise to you, but not all politicians keep their promises. And he has," Land added.

While many evangelicals are pleased to partner with Trump, there are others who are troubled by the alliance.

"I came of age and became involved in politics during the culture wars of the '80s. It was drilled into me that character matters. And when Bill Clinton was running for president, his lack of character mattered," said Karen Swallow Prior, an English professor at Liberty University in Lynchburg, Va., who has publicly questioned her movement's priorities.

Trump's character should matter as well, she said.

"I don't insist on perfect character or even religious agreement to vote for a candidate, but I do think that a certain base line of character matters," she said.

Liberty University's president, Jerry Falwell Jr., is among those who have embraced Trump.

Social conservatives were wary, initially, of the thrice-married billionaire entrepreneur.

At the Family Research Council's 2015 Values Voter Summit, with the Iowa caucuses on the horizon, Trump finished fifth in the group's straw poll, capturing just 5 percent of the vote.

But social conservatives warmed to Trump as the campaign progressed.

Today, some of Trump's aides are portraying his leadership as divinely ordained.

"I think God calls all of us to fill different roles at different times, and I think that he wanted Donald Trump to become president and that's why he's there," Sanders told the Christian Broadcasting Network earlier this year.

On Tuesday, Trump campaign manager Brad Parscale highlighted a recent campaign rally in Wisconsin with a tweet that said: "There has never been and probably never will be a movement like this again. Only God could deliver such a savior to our nation and only God could allow me to help. God bless America!"

The alliance between evangelicals and Trump is mystifying to some observers, including Max Boot, author of The Corrosion of Conservatism: Why I Left the Right.

"I'm troubled by the way that evangelicals kind of give this quasi-religious backing to Donald Trump," said Boot, a national security fellow at the Council on Foreign Relations. "I just am struggling to figure out how people who pride themselves on being churchgoing and believers in the Ten Commandments can possibly countenance somebody who violates so many of those commandments."

Strategically, however, it makes sense for Trump to shore up his base, Boot said.

"If Trump loses evangelical support, you can stick a fork in him. He's done," he said.