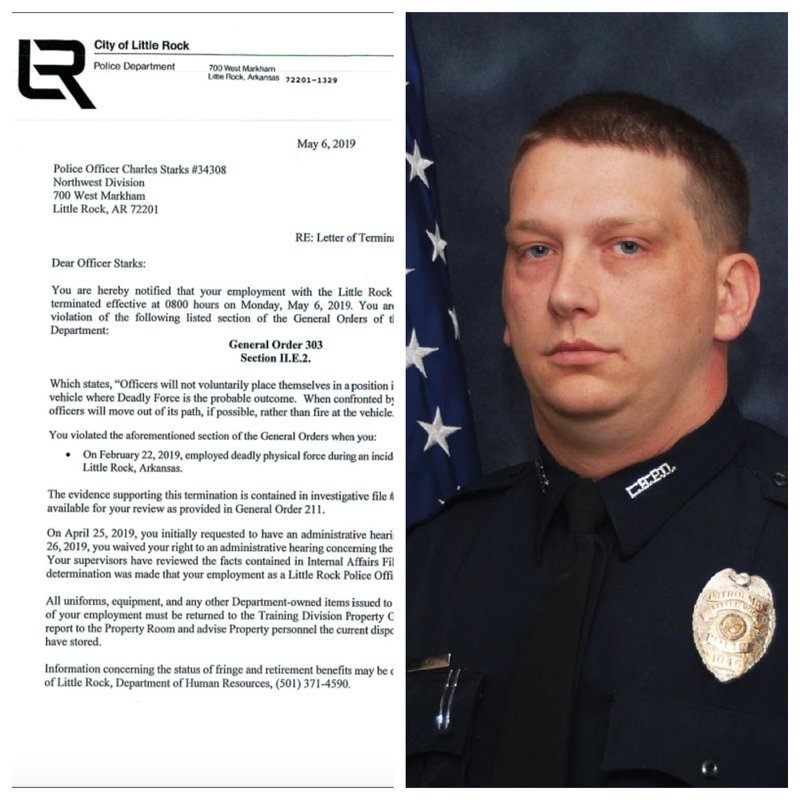 Termination letter from Little Rock Police Chief Keith Humphrey addressed to Officer Charles Starks, with a file photo of the officer. "You are hereby notified that your employment with the Little Rock Police Department is terminated effective at 0800 hours on Monday, May 6, 2019," Humphrey wrote to Starks, explaining he has 10 days to appeal the decision.

The Little Rock police chief fired officer Charles Starks on Monday for stepping in front of a moving vehicle during a fatal shooting in February, according to documents provided to the Arkansas Democrat-Gazette.

During the internal investigation that concluded Friday, each of the four supervisors in Starks' chain of command recommended the officer be exonerated, saying his actions were justified given the nature of the incident, according to copies of the recommendation letters.

On Feb. 22, Starks shot 30-year-old Bradley Blackshire eight times during a traffic stop in which Blackshire drove the car forward and it struck Starks first on the hip and then knocked him off his feet after the officer moved in front of the vehicle.

Starks' attorney, Robert Newcomb, who provided the recommendation letters to several news outlets Monday, said he disagreed with Humphrey's decision to terminate Starks and that he feels there was outside influence on the chief's decision. 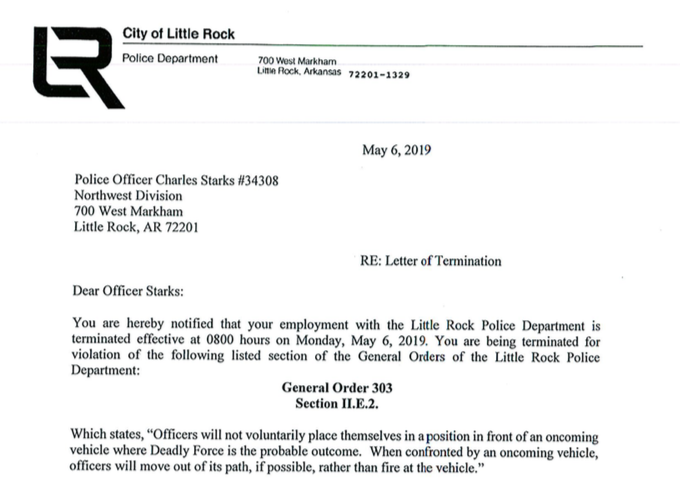 "The mayor [Frank Scott Jr.], he basically promised this from the beginning," Newcomb said of the firing. "Collectively, Starks' chain of command had more than 100 years in the Little Rock Police Department, and they all said he should be exonerated."

"The mayor did not tell Chief Humphrey to terminate Officer Starks," Jackson said. "Nor did he influence that decision."

Jackson said Scott only learned of the decision Monday morning after Starks had already been fired.

Newcomb said he planned to appeal the department's decision to the Little Rock Civil Service Commission.

The Blackshire family, who have protested and called for Starks' prosecution and firing multiple times in the weeks since Blackshire's death, released a statement via their attorney, Omavi Shukur.

"The family welcomes the decision to terminate Charles Starks's employment," the release said. "We hope the City will also take further steps towards making amends for this avoidable, devastating tragedy, which, in addition to bringing distress to Bradley Blackshire's community, has upended the lives of his loved ones, including his five children."

The Little Rock Fraternal Order of Police said in a news release Monday that it "strongly disagrees" with Humphrey's decision to fire Starks.

In the letter, union President Ronnie Morgan said Starks did not voluntarily place himself in the path of a vehicle but, rather, was backing away when the vehicle initially struck him. Everything after that initial contact, Morgan said, was a result of the deadly force used against the officer.

"Today's decision sends a message to officers of the department, that even when you're right, your employment can still be terminated," Morgan said in the release. "While the [Little Rock Fraternal Order of Police] Executive Board is greatly disappointed with the Chief's decision, we continue to support Officer Starks as he goes through the appeals process."

Starks was relieved of duty three days after the shooting near the intersection of South Rodney Parham Road and Kanis Boulevard. On April 18, the Pulaski County prosecuting attorney's office announced it would not press charges against Starks, noting that the vehicle moving toward him was considered a deadly weapon.

The Little Rock Police Department announced it would release the results of the internal investigation.

Each internal investigation in the Police Department has two stages. The internal affairs investigators first compile a report that gives the details of the incident and identifies what -- if any -- department policy was violated.

The report is then given to each supervisor in the officer's chain of command. The supervisors give recommendations on whether they believe the officer violated the policy and if so, what disciplinary measures should be taken.

The internal investigators identified a possible policy violation in the Blackshire shooting, according to the chain-of-command recommendations.

"It is clear that Officer Starks was forced to make a split-second judgment in a situation that was tense, uncertain and rapidly evolving," Helton wrote in his recommendation.

"While some might question the tactics used by Officer Starks in his initial contact with Mr. Blackshire ... I do not believe his intent was to create a dangerous situation that would leave him with no choice but to use deadly force," Helton wrote.

Finks pointed out that Starks has been involved in 4,266 police incidents since he was hired in 2013 and had made 266 misdemeanor and felony arrests.

"The encounter with Mr. Blackshire is the only time that Officer Starks has resulted in utilizing deadly force in making an arrest," Finks said. "In assessing what was different in this situation as opposed to the other 266 individuals arrested by Officer Starks, I believe that it was the unfortunate, but yet deliberate, actions of Mr. Blackshire."

When the review was turned over to Humphrey on Friday, the unanimous recommendation was to exonerate the officer without discipline.

When asked Monday why Humphrey's decision did not reflect the recommendations of Starks' superiors, department spokesman Lt. Michael Ford said the department would not comment on the officer's termination until the conclusion of the appeals process.

Starks was asked to arrive at Humphrey's office at 8 a.m. Monday to receive his letter of termination, Newcomb said.

The termination was effective as of 8 a.m. Monday.

"He was just devastated," Newcomb said.

Newcomb said the department had unfairly characterized the officer's actions. Starks has 10 days to submit an appeal to the commission that describes why Starks wishes to contest his termination. The Civil Service Commission is responsible for personnel policy, regulations and employee appeals for the Police Department and other city services.

Stacey Witherell, director of Little Rock's Human Resources Department, said that because the appeal has not been officially filed yet, there is no way to estimate when the hearing might take place.

Little Rock Civil Service Commission rules and regulations state that once an appeal is turned in, the commission has 15 days to choose a date for the hearing.

Witherell said the commission also issues a deadline for attorneys to submit witness lists and any joint stipulations at least 30 days before the hearing. Considering the two deadlines, it is unlikely the hearing would take place less than 45 days after the appeal is submitted.

The hearing is then set for a date that is agreeable to both parties and the Civil Service Commission. Although the commission already has many hearings and meetings scheduled for the coming months, Witherell said the commissioners may prioritize certain hearings over others.

"If there's an issue of back pay, it's always our intent to try to hear those first," Witherell said. "You don't want something sitting out there for a year. ... Due to the seriousness of some cases, we do try to move those up, if possible."

Newcomb said he had not submitted Starks' appeal as of Monday afternoon.